This lesson will cover the ading the indicfollowing

Developed by Larry Williams, the Williams %R is a momentum oscillator designed to determine overbought and oversold market conditions. It is best applied to trending markets.

It is exactly the opposite of the Fast Stochastic Oscillator in that it compares the level of the close to the highest high during the lookback period, while the fast stochastic oscillator reflects the level of the close relative to the lowest low. The Williams %R then corrects the inversion by multiplying the result by -100. Thus, the two oscillators readings are an exact match (when used with the same trackback span of course) but their scaling is different.

Whereas the fast stochastic oscillates between 0 and +100, the Williams %R varies between -100 and 0. The areas between -20 and 0, and -100 and -80 are considered as overbought and oversold, respectively. Another difference between the two is that the Williams %R has no internal smoothing.

On the screenshot below you can see visualized both the Fast Stochastic Oscillator and the Williams %R, tracking back the Williams %Rs default 14 periods of price data. As you can see, they are an exact match. 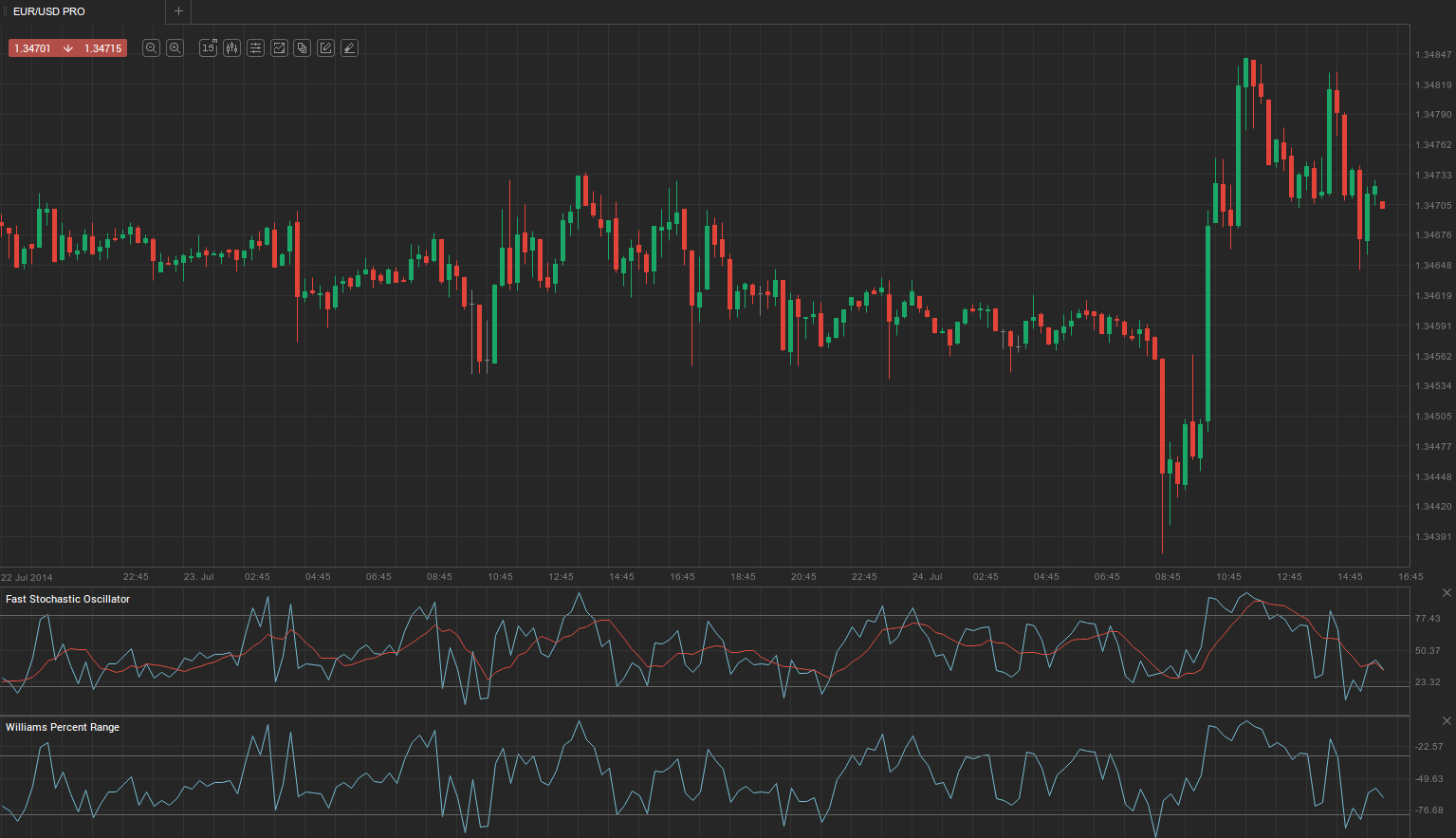 Here is the formula used to compute the Williams %R value:

– Close is the closing price for the current period

– Highest High is the highest price reached during the lookback period

– Lowest Low is the lowest price touched during the lookback period

Just like any other bound oscillator, the Williams %R is designed to identify overbought and oversold conditions, which in terms signal possible price reversal or at least retracement levels. As we said, the range between 0 and -20 is considered as overbought, while values between -100 and -80 are deemed oversold. Of course, these levels can be adjusted to match current market conditions – if volatility is continuously being low, the thresholds can be loosened for example to -30 and -70.

Generally, overbought and oversold conditions indicate an upcoming reversal or at least a retracement, but this is not always the case. During strong trends where the dominating counterpart is exerting continuous and strong buying/selling pressure, the market might become overbought or oversold and remain in that state for an extended period of time.

Thus, successful frequent overbought and oversold reversals are most typical for ranging markets and weaker trends. Generally speaking, a buy signal is generated when the oscillators value falls into oversold territory, reverses and enters back the normal range. A sell signal is logically produced when the asset becomes overbought, but reverses and the Williams R% returns into normal values.

Another hint for an upcoming reversal is given away when the Williams %R manages to consistently enter the overbought or oversold area, which is a sign of strong buying/selling pressure, but at a certain point momentum weakens and it is no longer capable of reaching the extreme area. For example, if a currency had successfully risen above -20 for two-three consecutive times but it failed at the fourth attempt, it suggests that the weakening buying pressure exerted by bulls is preceding a price decline.