Developed by William Blau and introduced in the January 1993 issue of Technical Analysis of Stocks and Commodities magazine, the Stochastic Momentum Index (SMI) is quicker compared to the popular traditional Stochastic and helps a trader to identify where the current close has occurred relative to the midpoint of the recent high to low range, based on price change in relation to the range of the price.

Similar to the majority of oscillators, the SMI fluctuates between -100 and +100. There are several ways to use this indicator as a trading signal provider:

Second, crossovers between the SMI line and the signal line. A signal to buy is generated, when the SMI line crosses above the signal line. A signal to sell is generated, when the SMI line crosses below the signal line. Using this approach, however, may lead to a lower percentage of winning trades. In order to avoid low probability signals, a trader may add a neutral zone to the oscillator at the levels -15 and +15. This way if he/she makes a short entry on a crossover, that occurs at the overbought level (+40) or above it and after that another crossover takes place in the -15/+15 neutral zone, the trader will not reverse his/her position, but will instead wait to see how the market reacts to the relative resistance on the present move down. If the market moves through the neutral zone and the trend remains intact, the trader may decide to add to his/her position or to place a tighter stop.

A regular bullish divergence is a situation, when the market forms lower lows, while the indicator forms higher lows.

A regular bearish divergence is a situation, when the market forms higher highs, while the indicator forms lower highs.

A hidden bullish divergence is a situation, when the market forms higher lows, while the indicator forms lower lows.

A hidden bearish divergence is a situation, when the market forms lower highs, while the indicator forms higher highs. 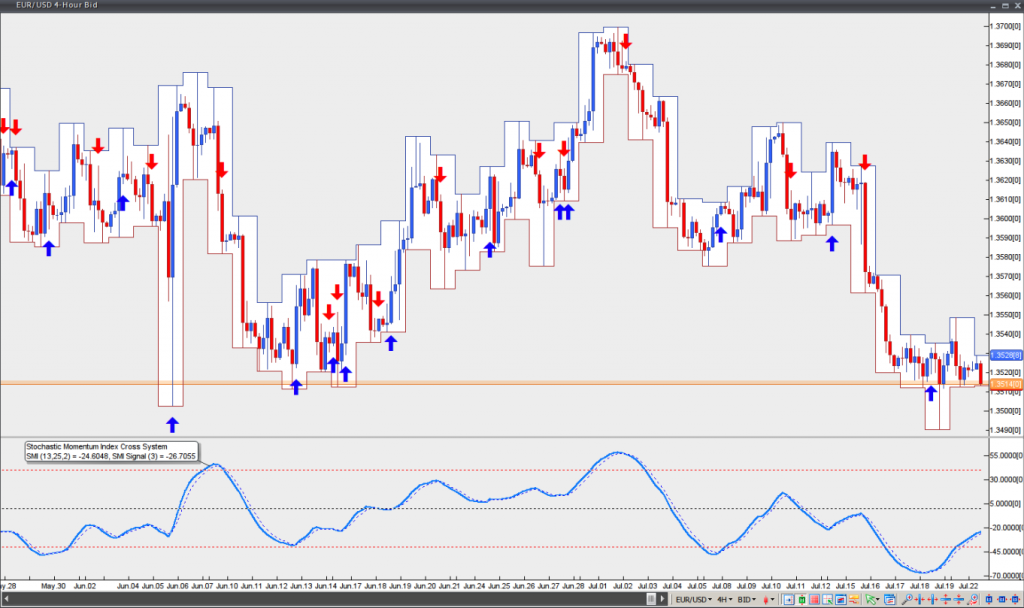