Developed by Edwin Coppock, the Coppock Curve was first designed to identify long-term buying opportunities in the stock market, particularly the S&P 500 and Dow Jones, but can also be used to generate entry signals in Forex after an adjustment of its settings.

Coppock initially used a monthly time scale and calculated the indicator as a 10-month weighted moving average of the sum of the 14-month rate of change and the 11-month rate of change of the index. Buying opportunities were presented when its value fell below zero, reversed and crossed back into positive territory.

The basis of calculation for this indicator is different in comparison to most other oscillators which begin by calculating the percentage change of the current price from a previous price, where the previous price is the reference point. The Coppock curve however shows the market participants emotional state as a sum of the prices percentage changes over a certain number of past periods, which in terms provides an insight into the markets long-term momentum. For example, if the market is up 20% from a year earlier in June, the previous month it was 15% higher compared to the respective period last year, in April it was 14% higher year-on-year, and so on, we can assume that the market has been dominated by bullish momentum during the trackback period.

Due to its nature of a trend-following indicator, the Coppock curve lags behind price action and will thus not be able to exactly pinpoint market bottoms. However, its ability to show price reversals and especially trend reversals makes it undoubtedly a useful tool in the handset of long-term traders. The example below shows its visualization in a trading platform. 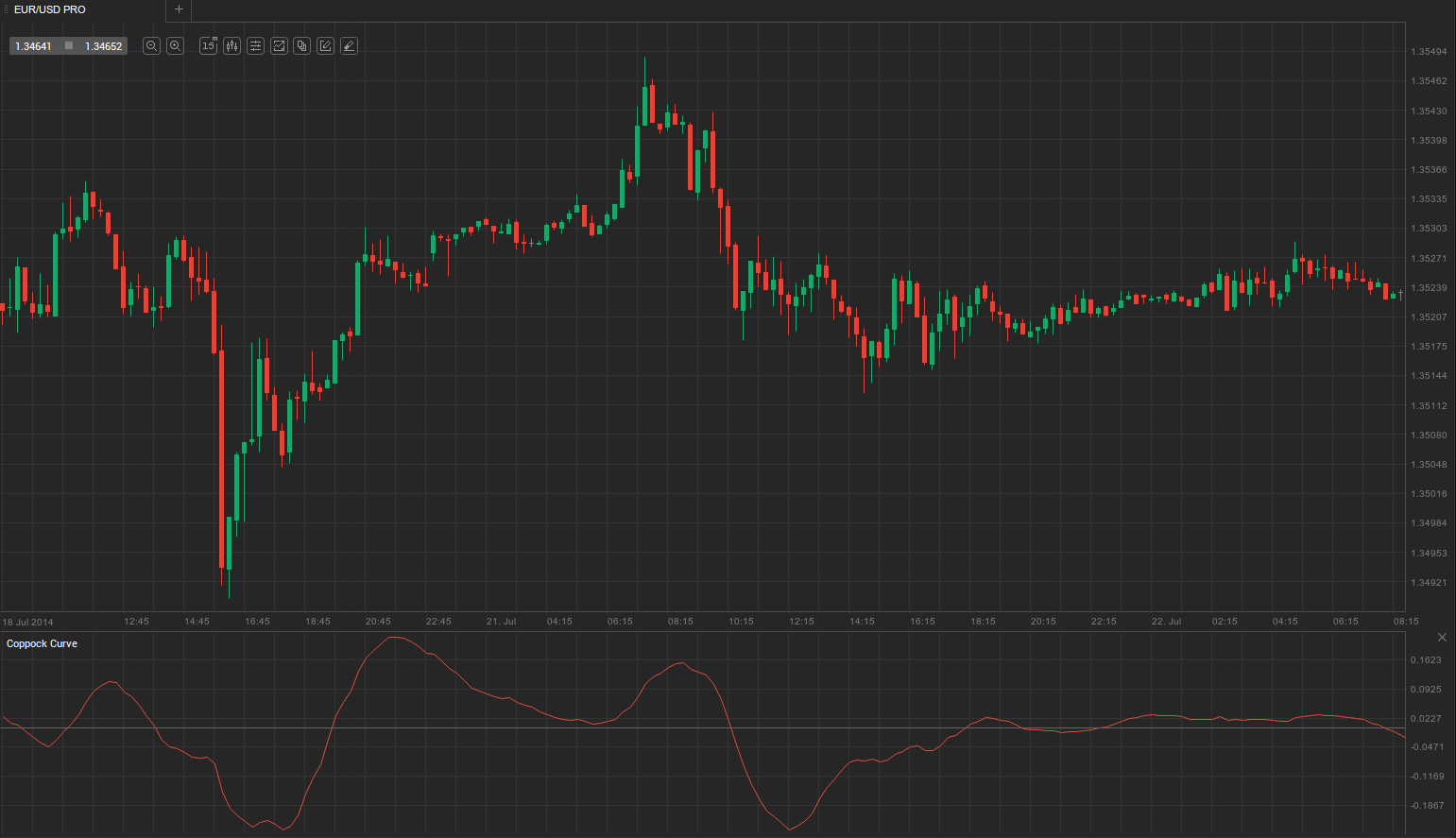 It is calculated using the following formula:

Basically, the Rate of Change measures momentum and the WMA smooths out the data. Having calculated the 14-period RoC and the 11-period RoC, they are then smoothed by a 10-period WMA, which puts more weight on the most recent periods.

Coppocks intial monthly lookback period would require a huge period of time to generate an entry signal. However, due to the indicators method of calculation, it is easily adjustable and flexible, thus can be used on any time frame, including intraday charts.

Apart from switching time frames, you can also adjust the trackback period. Lowering it will make the indicator more sensitive, but will also generate a larger number false signals, and vice versa.

As we said earlier, originally it was used to designate only long entries signaled by the indicator crossing from negative into positive territory. However, many traders have started to also enter opposite trades and even trade divergences between the indicator and the price.