Developed by Dr. Alexander Elder in 1989 and introduced in his book ”Trading for a Living”, the Elder-Ray indicator is comprised by three elements – Bear Power, Bull Power and a 13-period Exponential Moving Average.

There are four basic conditions, required to go long or short, with the use of the Elder-Ray method alone. Alexander Elder recommends using this method in combination with the Triple Screen method.

In order to go long:

1. The market is in a bull trend, as indicated by the 13-period EMA
2. Bear Power is in negative territory, but increasing
3. The most recent Bull Power top is higher than its prior top
4. Bear Power is going up from a bullish divergence

The last two conditions are optional.

In order to go short:

1. The market is in a bear trend, as indicated by the 13-period EMA
2. Bull Power is in positive territory, but falling
3. The most recent Bear Power bottom is lower than its prior bottom
4. Bull Power is falling from a bearish divergence

The last two conditions are optional.

If a trader is willing to add to his/her position, he/she needs to:

1. add to his/her long position, when the Bear Power falls below zero and then climbs back into positive territory

2. add to his/her short position, when the Bull Power increases above zero and then drops back into negative territory. 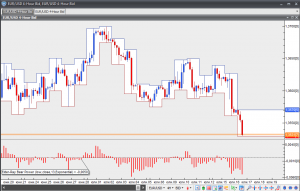 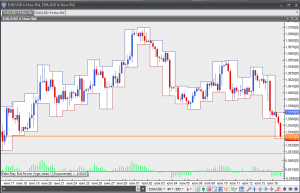