Previously we covered trending trading ranges in general and now it is time to discuss this type of market behavior particularly in stock trading due to its unique peculiarities that are linked to the stock markets trading hours.

Generally, trending trading range days begin with an opening range which is 30-50% the size of the recent days average range. Usually the days first trading range is broken out of an hour or two from the opening and the market enters another higher or lower trading range, just like on the following screenshot. 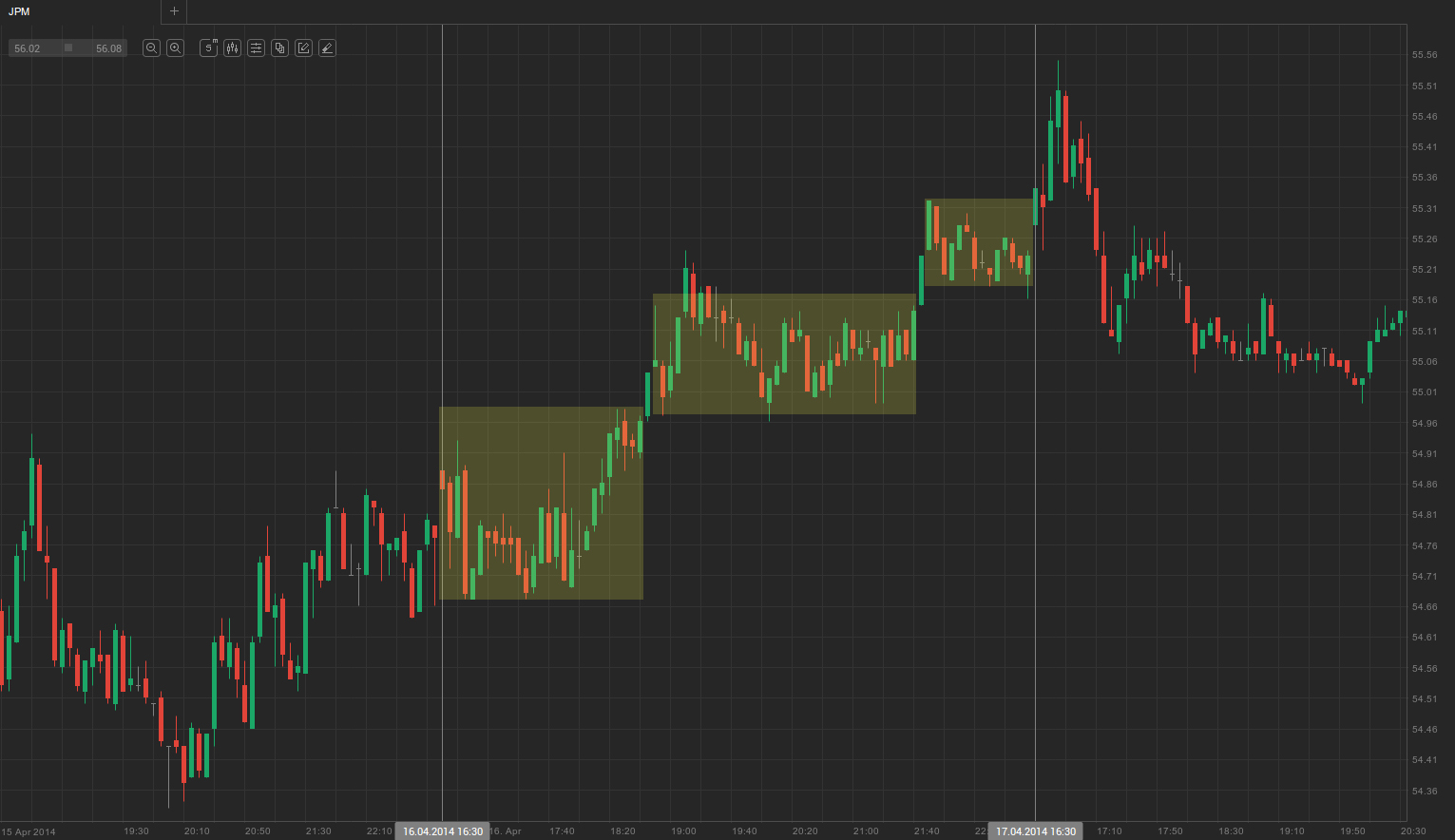 Usually, as the second range begins to form, there is a pullback testing the previous range. Often it succeeds to break back into the previous range, but if it does not, then the trend is considered stronger. However, the stronger and the more sustainable the breakout is, the higher the chance is for the day to become a spike plus channel trend day, instead of a trending trade range day. If the pullback however manages to extend beyond the lower trading range, then the day turns into a reversal day. Most reversal days begin as a trending trade range day.

Since trend pullbacks are basically a trading range, trending range days, or at least a portion of them, can be seen during each trend day, rendering them a very common occurrence. These trend days are made up of several trading ranges, which transition into each other via breakouts.

The opening trading range tends to last between one and three hours and, as noted above, is usually wide 30%-50% of the recent days average range. It reflects the markets unwillingness to perform any steep moves and the lack of urgency. This sentiment suggests the day will likely not become a strong trend day. Moreover, the initial trading range has the so-called “Vacuum effect”, which pulls the price back as it breaks out from the trading range, not allowing it to move too far away, thus forming a second range close to the first one.

There is a distinct difference between the spike of a spike plus channel trend (day) and the spike (breakout) which acts as a transition between two trending ranges.

The spike of a spike plus channel trend day usually happens in the beginning of the trading day. It consists of several large trend bars with small shadows and little overlap. It can also be a large opening gap. Regardless whether it is a succession of strong trend bars, or a large gap, it usually breaks above or below the previous days high or low, whereas the spike in a trending trade range day usually remains within the previous days range. Moreover, it is composed of fewer bars, which commonly have smaller bodies and larger shadows, and the bars overlap each other. 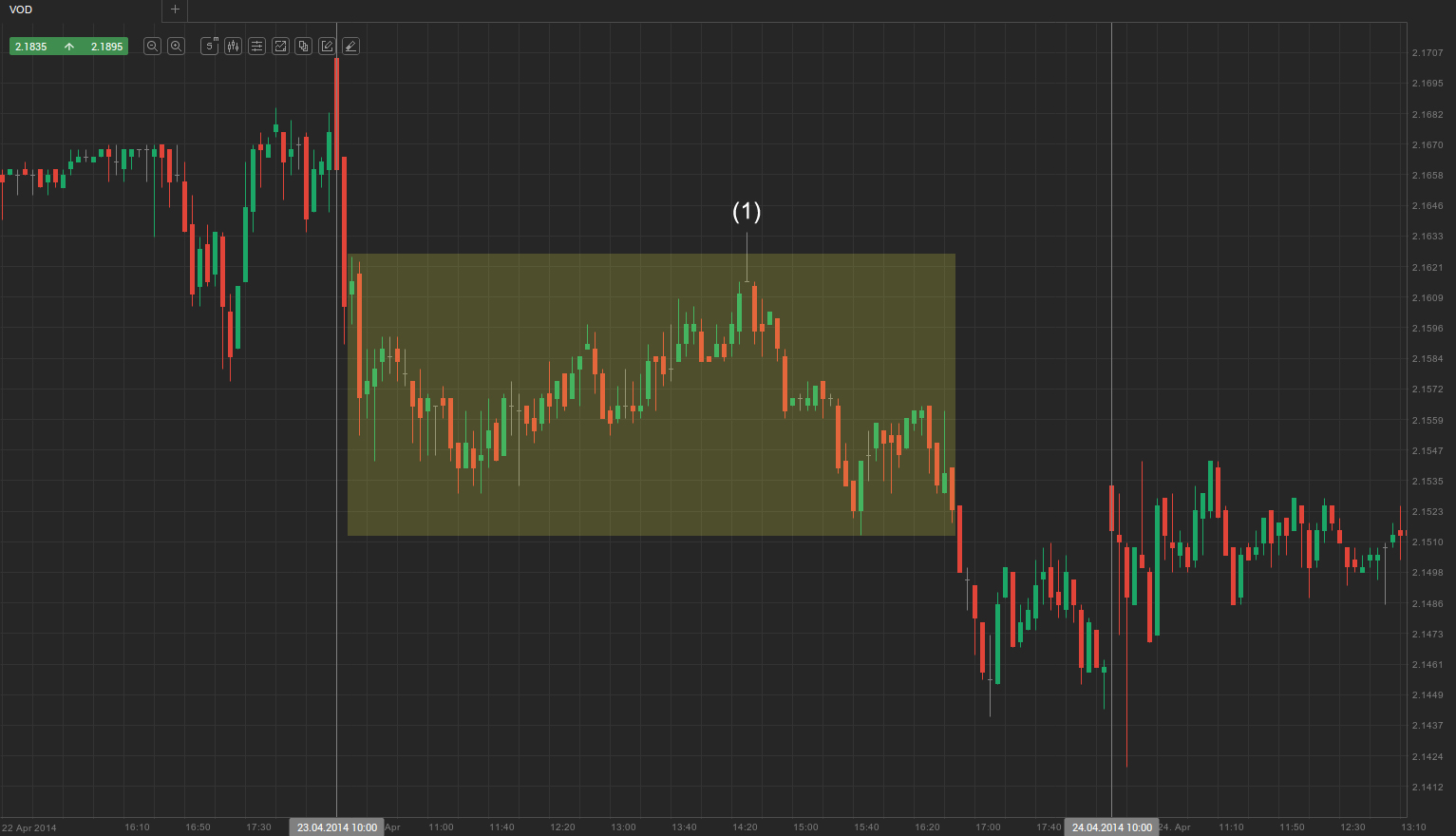 As you can see on the example above, the market opened with a significant sellout with two consecutive sell climaxes, paused by the first bull trend. Another bearish trend bar followed, after which the three bullish bars, with shadows exceeding their bodies, and a doji presumably indicated that this might be a trending trade range day at most, if not a trading range day. The market later formed an upward sloping trading channel, which however did not display too much of an upward pressure, as evident by the large amount of doji bars within it.

As weve mentioned in the article “Overview of channels“, each channel, especially if displaying some signs of weakness in momentum, can be seen as a type of sloping trading range. Moreover, the high of the upward sloping channel, at (1) marked the end of the correction after the days initial sell-off, after which the price edged lower, but still remained within the days overall wide trading range, with the market persistently being overall two-sided. A breakout followed late in the day, but the price entered a lower trading range instead of beginning a strong trend.

In general, because both bulls and bears see value in the market on such days, the trading ranges vacuum effect causes the price to often pull back to the breakout area. We said in the previous article that as soon as the breakout reaches 50% of the average daily range, market players counter-bet strong trend bars, which might drive the market back up to the bottom of the initial higher range.

If the market enters once again the initial range, it will often test its top, especially if that happens in the final hours of the trading day. If the day closes at the top or above the average day, it is a reversal day.