As weve mentioned in the previous article “Basics of Trends and Trend Lines”, trend lines are means used to better visualize the trending market movement. They are plotted beneath or above the price action, depending on the trend. Trend lines can be drawn using three or more consecutive price extremes (highs or lows), but also by using linear regression or through eyeballing (best fit technique).

The most commonly used method is connecting price extremes (swing points). However, if necessary, price action traders use the best-fit technique when it comes to visualizing wedges and they tend to ignore the candles shadows, basing the figure on their bodies.

There is a reason why most tutors advise novice traders to always enter with-trend positions and never go against the market. The market spends more time forming new extremes in the trends direction, rather the opposite extremes. After a trend has been established, the most profitable trades are in the direction of the trend line right after it has been tested.

On the screenshot above you can see examples of both trend line undershooting and overshooting. As you can see, the price action cluttered around the trend line several lines before it was overshot at (1), which meant it was a zone at which bears were applying heavy sale pressure. However, this is a very strong bullish trend. As soon as bears tested the trend line once again and formed the outside down bar, which overshot the trend line, bears covered shorts and bulls pushed the market up, forming the biggest candle in the trend and hitting a new trend extreme. You can also see that the trend line was undershot several times, but the following rebounds were not so impressive.

This is a point where many novice traders decide to play against the market and fail. As the price repeatedly reverses toward the trend line in an attempt to break it, it becomes very easy for inexperienced traders to get lured by a strong pullback. Ignoring what happened in the previous 10 or even more bars, these traders will enter counter-trend positions hoping that they might have captured in advance the formation of a new trend and therefore will profit through the whole duration of the supposedly newly formed trend.

If the current trend is a bull one, novice traders will sell above, at or little below the bull trend line, disregarding the current trend and the risk, and thinking only about what they can possibly gain. They are thinking that even things turn out wrong, the market will at least have a second leg down that will allow them to exit the position at breakeven or at a minor loss.

However, what experienced traders will do is exactly the opposite. They will have limit orders or place market orders to buy at or a bit below the trend line, relying on the current trends strength and anticipating a rebound from the trend line towards the trend extreme. In a bull trend for example, the market usually needs to fall beneath the trend line after a sell-off so that it becomes clear where bulls and bears stand, but most of the time the bulls will regain control and the trend will resume. After all, weve said numerous times now that trend reversals fail most of the time.

Keep in mind that when it comes to a trend channel, many traders actually prefer a trend channel break before looking for a reversal that would penetrate the other side of the channel as a minimum profit target.

However, be careful when drawing multiple trend lines in order to visualize the trend line breaks and reversals, because they can clutter your chart, which will distract you from the actual price action. You need to use trend lines only to see how a bar handles close to the trend line, and not base your decisions on the trend lines themselves.

When the price action clutters near the trend line and retests it many times within a small period of time, there can be two outcomes. The price will either break through the line and try to reverse the trend, the most common scenario, or it can discourage the counter-trend traders and force them to give up, resulting in a strong acceleration of the trend towards its extreme.

Although trend reversals are much rarely seen compared to failed reversals, a very intense testing of the trend line means that the with-trend traders are barely managing to hold the front against the counter-trend traders, creating small trading ranges within the larger trend.

As for the second scenario, you can also expect that often a repeated retesting of the trend line will result in the price bouncing off of it and accelerating toward the trend channel line as the counter-trend traders finally give up. They will exit their long positions, in case it is a bearish trend, at a loss and abstain from entering in the same direction until the market drops significantly. They will aim to repeat the exercise and go long again as soon as the price touches or overshoots the trend channel line. Check out the following example. 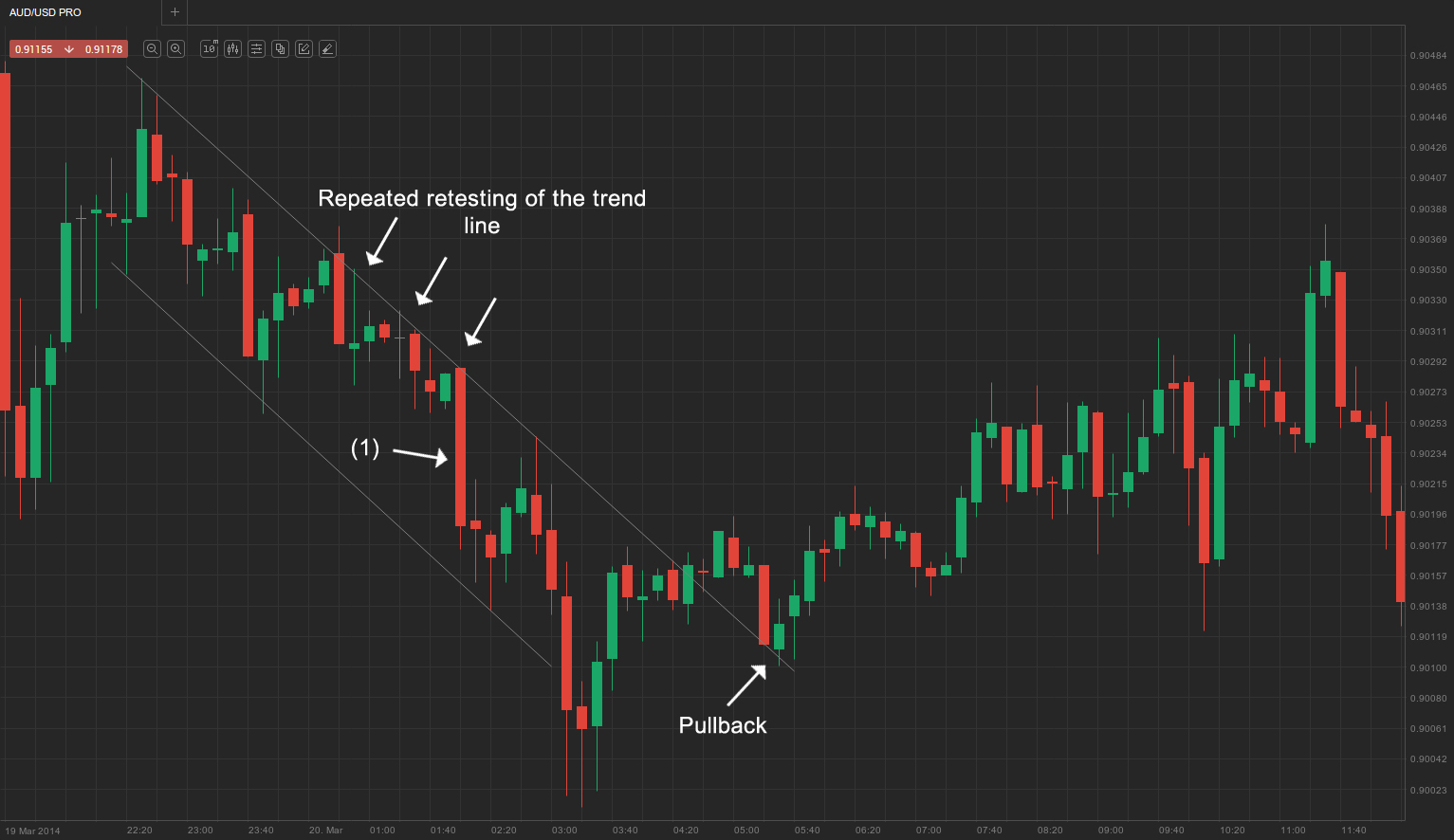 You can see on the screenshot above that the price repeatedly retested the trend line and basically created a small trading range within the bear trend, including a perfect doji bar. After several attempts by the bulls to break the trend line and reverse the trend, they actually gave up and sold off their long positions, which, coupled with other traders short orders, resulted in a large bear trend bar, marked as (1). After the sell climax, bulls once again entered the market at the trend channel line and pushed the price toward the trend line, which however was followed by another sell climax that broke through the trend channel line.

If the price fails to break through the trend line and drops toward the trend channel line in a bearish trend, the latter is often penetrated (the opposite is logically true for a bull trend). As soon as that happens, you need to be on the lookout for a reversal back to the top, a rally that can even be a test above the trend line. This is a point of interest for traders and a possible trap for newbie traders who think that the trend line cant be broken and go short near it. It is quite possible though that after the price recovers from a trend channel line break, especially after a sell climax, it rockets up and ignores the resistance role of the trend line.

This is exactly what happened in our case as well. The price penetrated through the trend line and later pulled back with a double-shaved bear trend bar only to hit the trend line, which once resistance, now acted as a support. Instead of breaking back below the trend line and resuming the downward trend, something which would have been seen as 2-3 bar trend line break on a higher time frame, the market found solid buying support and completed a strong bull breakout above the descending channel.