Very often you will see the market displaying ranging behavior and when it is trending, it is likely to be a weak, less distinctive trend. Strong and at the same time long, sustainable, trends which dont show climactic behavior are not that common, which means that you need be wary when prices reach support and resistance levels because they tend to trap less experienced traders.

During trade ranging days you should expect that horizontal lines drawn through swing highs and lows (basically support and resistance levels) will cause prices to rebound from them and basically keep the price action contained within the range between them.

You should be aware that breakouts from swing highs most often fail. During the process of testing the resistance they tend to mark a new high (higher high), which then acts as a turning point for the following reversal. The same way swing low breakouts fail and result in the formation of a lower low reversal.

Sometimes, however, you will see the market not reversing instantly after the higher high or lower low. Basically, the breakout failure fails. Instead, the market makes a second more extreme higher high or lower low. This presents us with an even better possibility to bet against the current market movement, because it is a second attempt to reverse the market and second entry signals are more reliable during trading ranges. 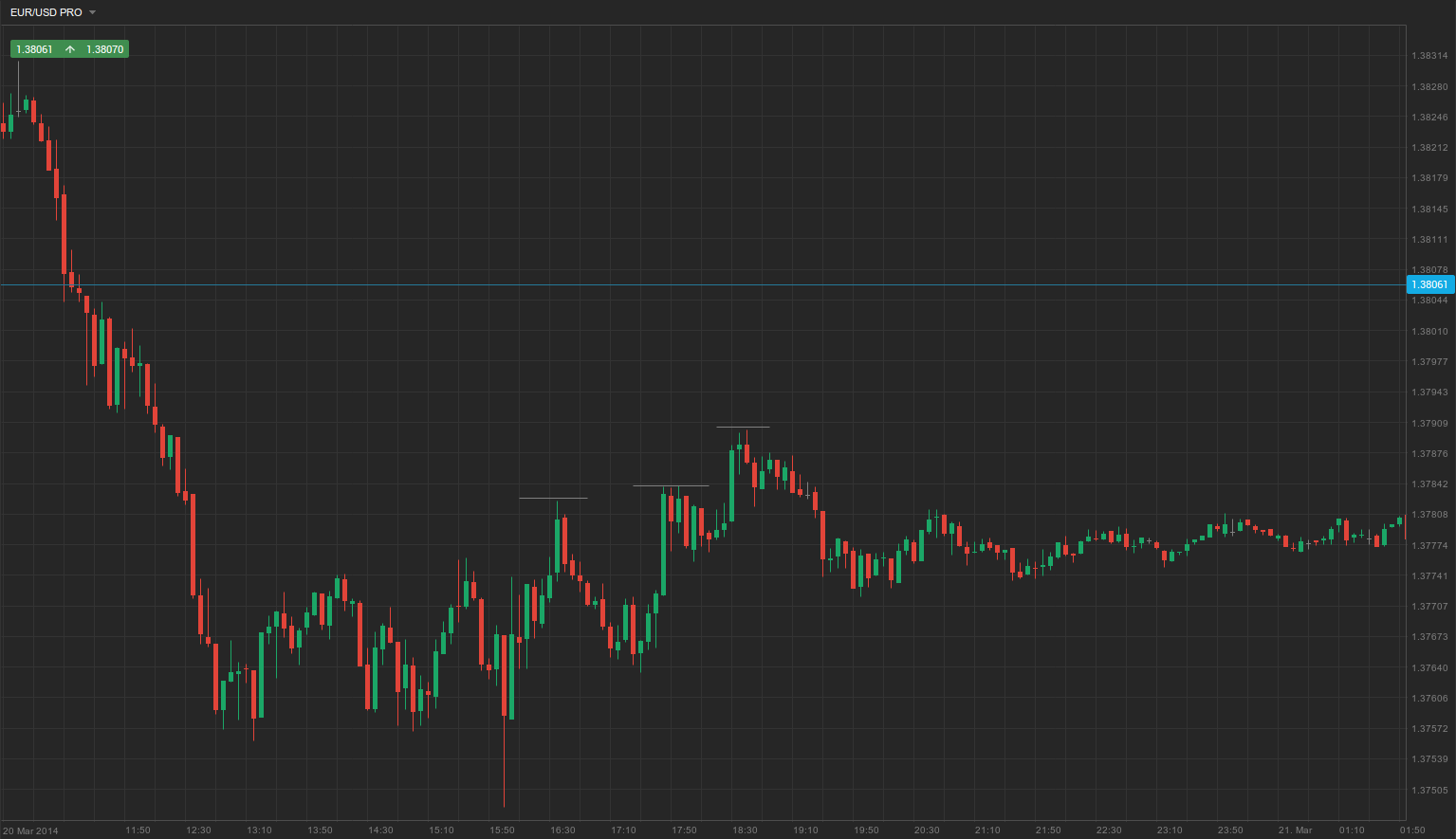 You can see on the screenshot above that the market has entered a trading range after a very strong downtrend which ended with a sell climax. Later on, the market marked a reversal after a swing high. Afterwards, it formed a higher high, but the price failed to reach the previous low and instead marked a second higher high after a short trading range. The second higher high was then followed my a more pronounced downswing, which would have been a good opportunity to short scalp.

Traders should always be on the lookout for all possible support and resistance zones during trading ranges, so that they can spot failed breakouts and enter on reversals, and preferably on second signals. Because second signals signify a reversal point from a more extreme level, this provides us with a better chance to scalp a profit.

Be careful with strong trends as well

During strong trends you should be very careful and generally abstain from entering counter-trend positions.

When the market is trending, support and resistance levels should be used to enter with-trend positions on pullbacks. For example, if there is a strong breakout to the upside from a trading range, which is a part of a larger bullish trend, the market will very often pull back toward the resistance line, which will now switch roles and act as a support, propelling the market back up. If there is a bull reversal setup on the resistance/support line test, then a long entry would be wise, and vice versa.

If, however, you decide to bet against the market, then you should filter your entry points and stick only to scenarios when there is a good trend line break or a trend channel line overshoot and a strong reversal bar. Counter-trend positions, especially during very strong trending market movement, should generally be limited to scalping. You should not be focusing and wasting too much time on them. Instead, you should keep your attention turned toward with-trend entries, which have the potential to yield greater profit at lesser risk. 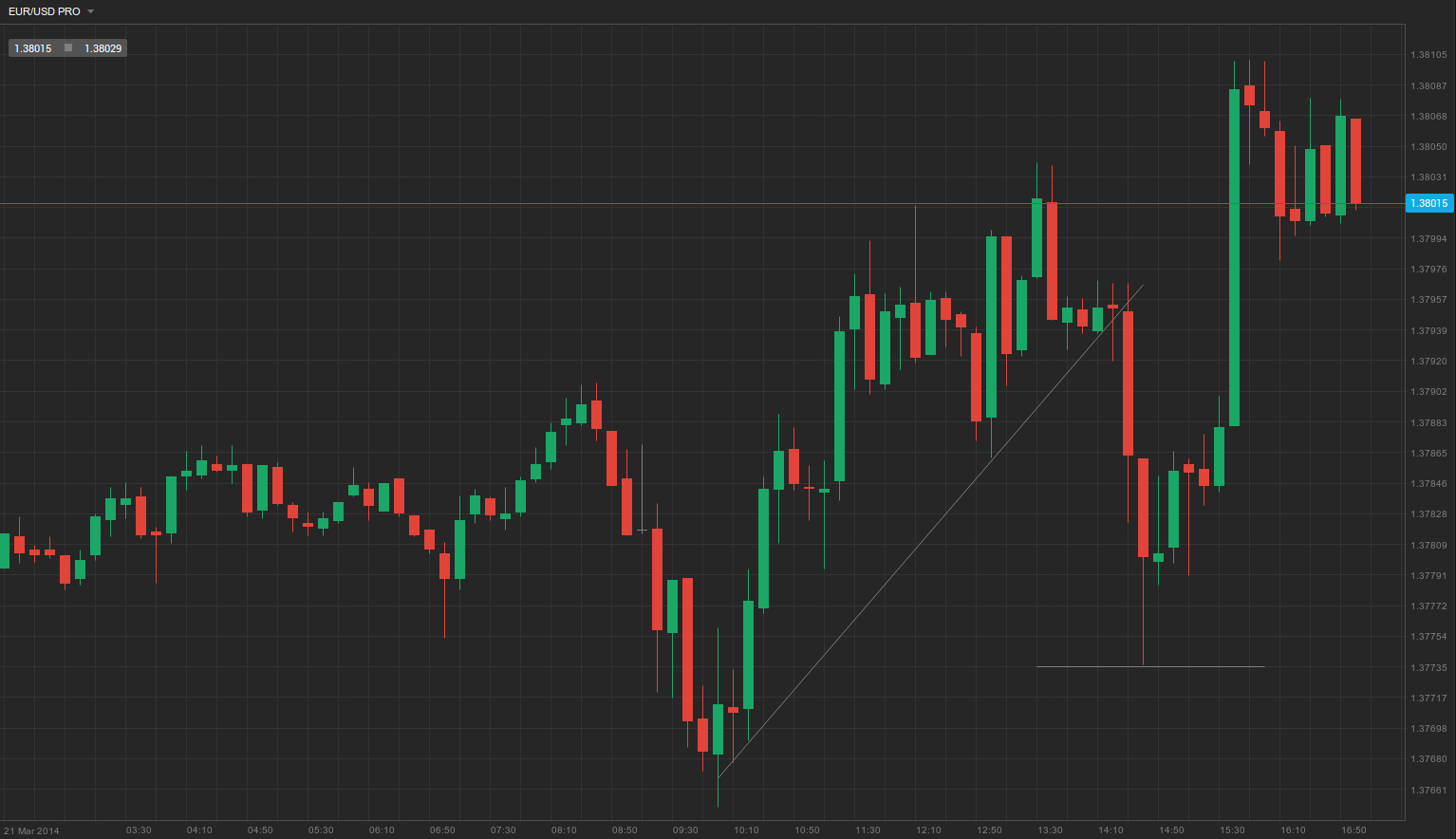 As you can see from the example above, the market broke through the trend line with a doji bar, followed by a big bear trend bar, which gave us a signal for a possible scalp. As soon as the big bear candle closed below the trend line after the downward breakout, a short scalp would be a wise decision, while using a protective stop above the high of the previous bar.