As weve mentioned in the article “Basics of Trends and Trend Lines”, a trend channel line is a line drawn on the opposite side of the price action from the trend line, thus the two create a channel that contains the market movement until a breakout occurs.

Trend channel lines most often generate counter-trend entry points, since they act as a resistance in uptrends and a support in downtrends. When the price overshoots the trend channel line and reverses, it makes up for a good point to fade the trend (bet against it) because it shows the trend has accelerated too fast. A reversal from a second consecutive overshoot is even more reliable. 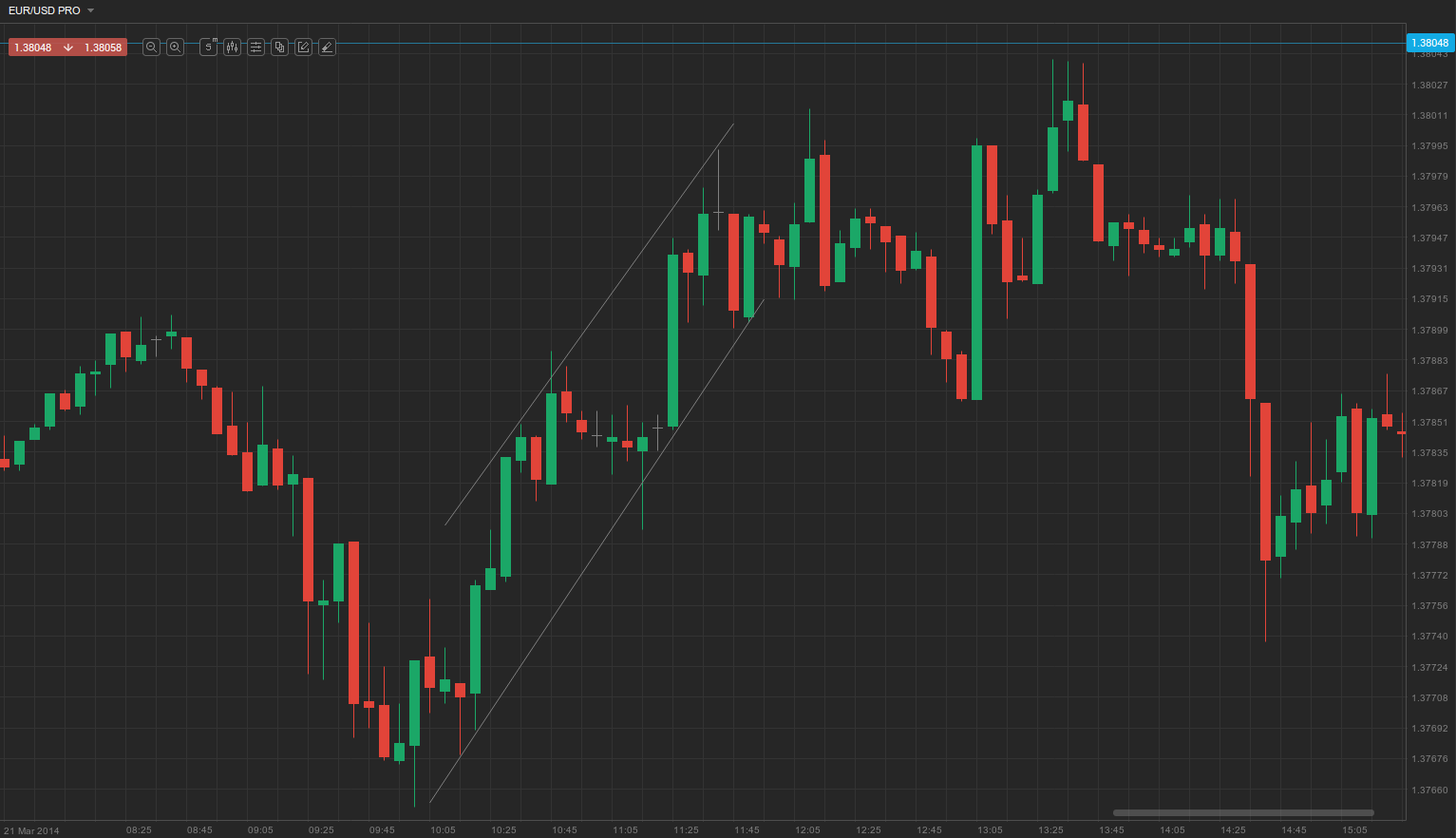 Sometimes there might be a single swing that distinctively exceeds the rest and doesnt fit the tighter channel. This should usually just be ignored, but keep in mind that in some cases the market might later form new extremes at relatively the same level, meaning that you should switch to using that new trend channel line.

Generally, each channel that is sloping up should be seen as a wedge, (even if it is not that apparent when it is made of two parallel lines, instead of sloping ones), therefore it is almost imminent that the price will break through the bottom of the channel (the trend line) in an uptrend, and vice versa. After the breakout, the price can either reverse and enter a bearish trend, or the market can go sideways. In some cases, the price might not break through the bottom of the channel, but rather accelerate very fast and break through the trend channel line, marking a very distinctive price rally, which can end in one of the same two scenarios – trend reversal or trading range. Logically, this is true for downtrends as well. On the following example you can see an ascending channel, whose trend channel line was penetrated by a buy climax, after which the market entered a trading range. 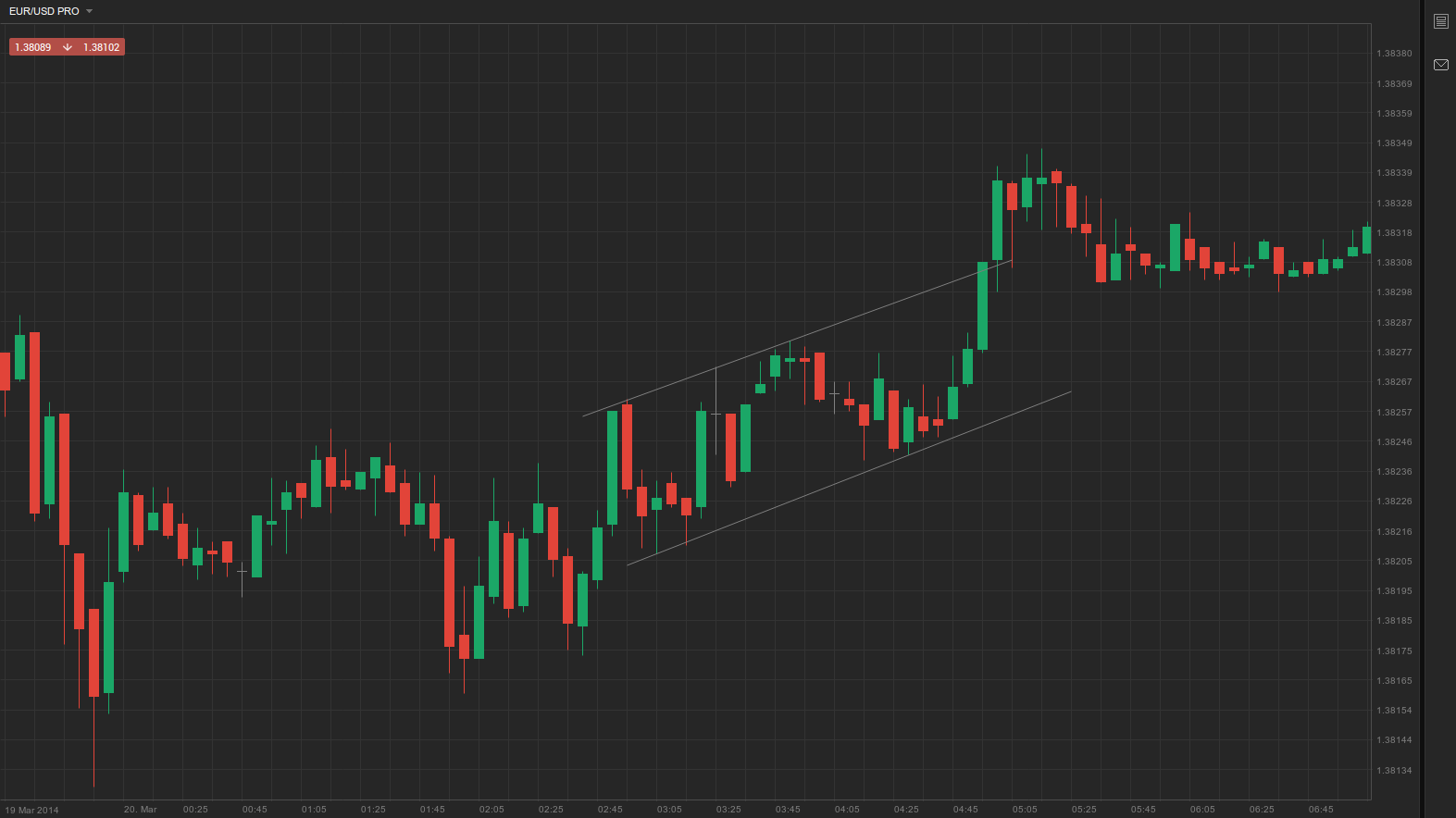 You might ask a question then, if reversals after a trend channel line overshoot are so common and everyone knows about them, why do they keep occurring. The answer is simple – inexperienced traders. By default, newbie traders on the wrong side of the trade abstain from cutting their losses short and hold their positions longer, hoping the market may reverse in their favor, up to the point they cant withstand any more losses. As all of them suddenly exit their positions at once, this causes the overshoot.

For example, in a bullish trend, as the market moves up toward a resistance level, and penetrates it even by a little, trapped inexperienced shorts, who had been hoping for a miracle, close their positions because they cant bare any more pain. As they cover their short positions, this pushes the market up, luring in another set of novice traders who, however, think that the trend channel line break is actually a proper breakout. And so they go long. Their orders add to the sudden upward move that breaks through the trend channel line, which causes any remaining trapped shorts to exit the market, which further adds to the momentum. This is basically a self-sustained buy climax up to the point where all the shorts have exited the market and there are no more new longs, because they realized (with delay) that they just bought at the peak of a buy climax and will sell in panic. Because there are no shorts left on the market and the bulls exit their positions, the market is quick to pull back.

This is the point where experienced traders kick in. Practice makes perfect and people who have previously traded such a scenario know that they shouldnt bet counter-trend before a pullback from a trend channel line overshoot or a trend line break occurs. In our example, experienced market players will buy (or sell in a bearish trend) until they push the price to the trend channel line, at which point they will lock in their profit.

If you find yourself in a position when the market keeps forming higher highs, which dont match your trend channel line, then you are probably placing the wrong bets. If you are attempting to trade against the market (in our case of a bullish trend you are trying to short and bet on a reversal), but that reversal doesnt come and the trend gets stronger, then you should best give up. As weve said before, you should abstain from trading counter-trend unless there is definitive proof the market has reversed or after a pullback from a strong trend line break or trend channel line overshoot.

At some point market participants will reach a mutual agreement where the trend channel line should stand and a convincing reversal will form. Until then you should trade only with-trend.

Once the market has reached a consensus that the price has hit a high, experienced long traders would immediately exit positions, locking in profits profits, and will then go short. Moreover, players who were outside the market until now will also join and go short. Experienced traders who are convinced this is a point of reversal will even hold on their shorts, even if the price manages to edge a bit higher. Not only that, but they will add to their positions at the new top so that they average up their position and profit even more from the reversal to come. This applies further downward pressure and as soon as all big players turn bearish, the market will fall.