Due to their importance as entry initiators, pullbacks should be defined using a broader definition. We can assume that each pause in the current trend is a pullback, even if it leads only to two-sided trading, instead of a counter-trend move. As you know, market movement is rarely completely one-sided, which means that even the strongest trends have at least small pauses.

Pullbacks can be considered as small trends inside the larger trend, and within them there will also be even smaller pullbacks, which can be clearly seen on a smaller time frame. We said in the article “Two Attempts for a Shift in Market Movement” that the market is commonly trying to do something twice, and if it fails both times, it usually attempts to do the opposite. This also means that pullbacks tend to have two legs, or even more. In most cases, if the second move fails to reverse the trend, the market will do the opposite and resume its trend.

In a bullish trend for example, a bear trend bar can be considered as the first leg of a pullback, even if its low hasnt managed to take out the previous bull trend bars low. If the following bar closes higher, but its high is below the bear trend bars high, then this is the second move of the ABC pattern. If the next, third, bar is bearish and its low extends below the low of the previous, bullish, bar, this will mark the third leg, which is also the second leg down. 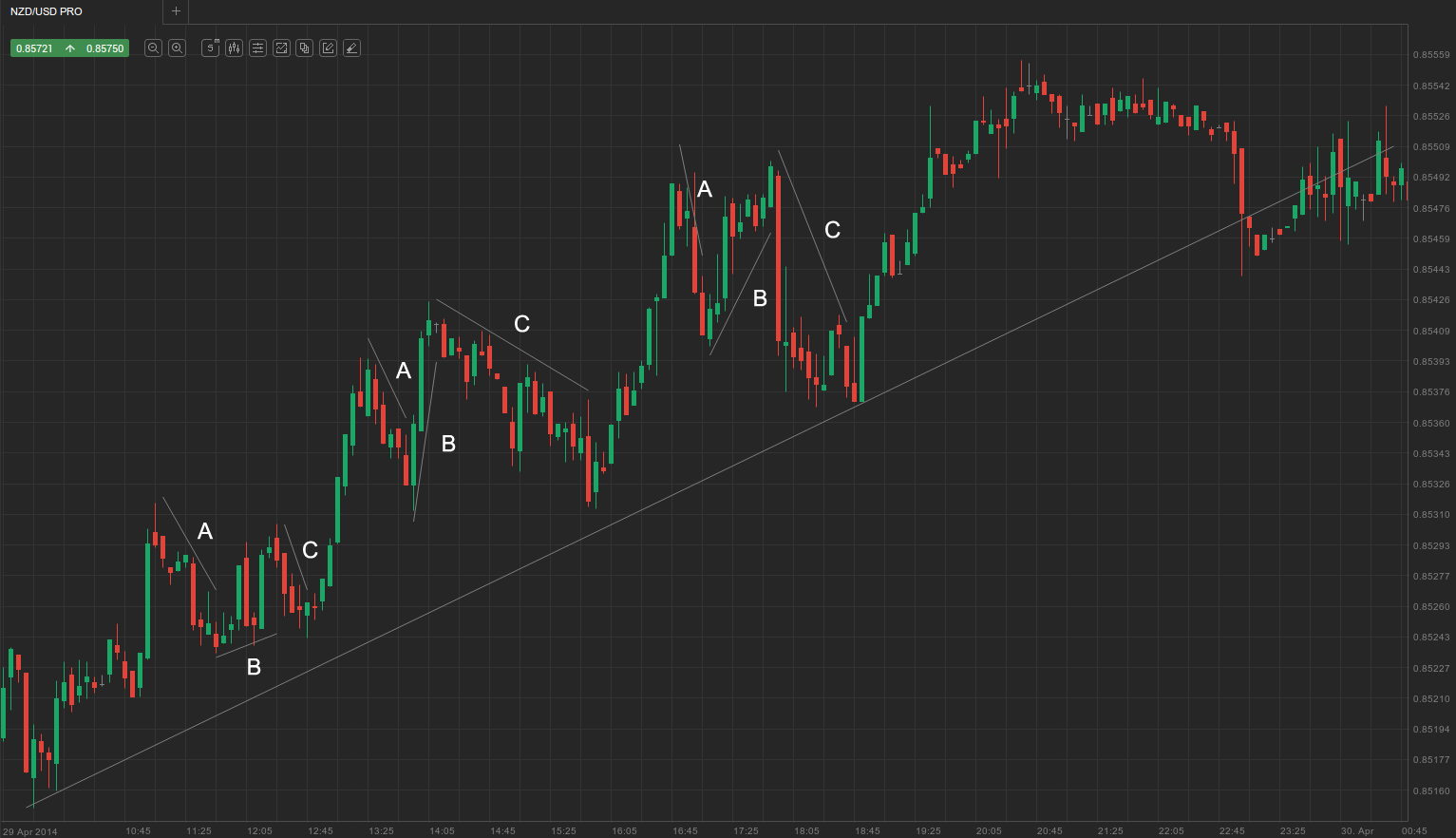 Weve discussed in the article “What Defines a Strong Trend” that during strong trends, pullbacks are a must-enter point, because the market continues to grind higher as most reversal attempts fail. Entering on pullbacks allows you to achieve extra profit and the fact itself that the pullback has ended is proof that the trend will continue for some time.

However, we also know that pullbacks are not so easy to enter, due to several reasons. First, many traders, especially during strong trends when pullbacks are shallow, wait for a pullback to extend deeper and by the time they realize it wont, it has already ended and with-trend movement has continued.

Another difficulty traders encounter is distinguishing a pullback from a trend reversal. Because pullbacks often come after an accelerated move, which somewhat resembles a climactic exhaustion, many market participants are afraid to enter with-trend positions because they fear the market may reverse or enter a trading range – something typical for climaxes, especially after a succession of two, three or more climactic bars.

Key to profiting from such pullbacks is realizing when a trend is strong enough to overcome these counter-trend moves persistently. Counter-trend traders who were late to assess the trends strength get trapped in as they bet that the price will reverse. At the same time, some with-trend traders who got trapped out because they thought the top was reached will chase the market up, adding to the buying pressure. This makes for a great with-trend entry at the bottom of the pullback, which very often lies near the moving average.

However, not every trend is that strong, and even strong trends come to an end eventually. Climaxes in weaker trends often lead to direction shifts, and what first seems as a pullback from the trend channel line overshoot will commonly be a reversal, or entry into a trading range. In an uptrend for example, often the pullback from such a climax penetrates the trend line, which is a sign to stop placing orders on the pullback from the old bullish trend and instead go short.