Throwbacks, and their opposite, pullbacks, are two of novice traders most hated patterns due to the panic and early exits they cause. However, because these patterns tend to occur relatively often, in fact around 20% of the time, you can learn to effectively protect your position and even use them to accumulate profit.

A pullback occurs when the price breaks below a support, retraces back to the support, which however now begins to act as a resistance and rebounds from it, continuing its downward movement. You can see a pullback visualized on the screenshot below. 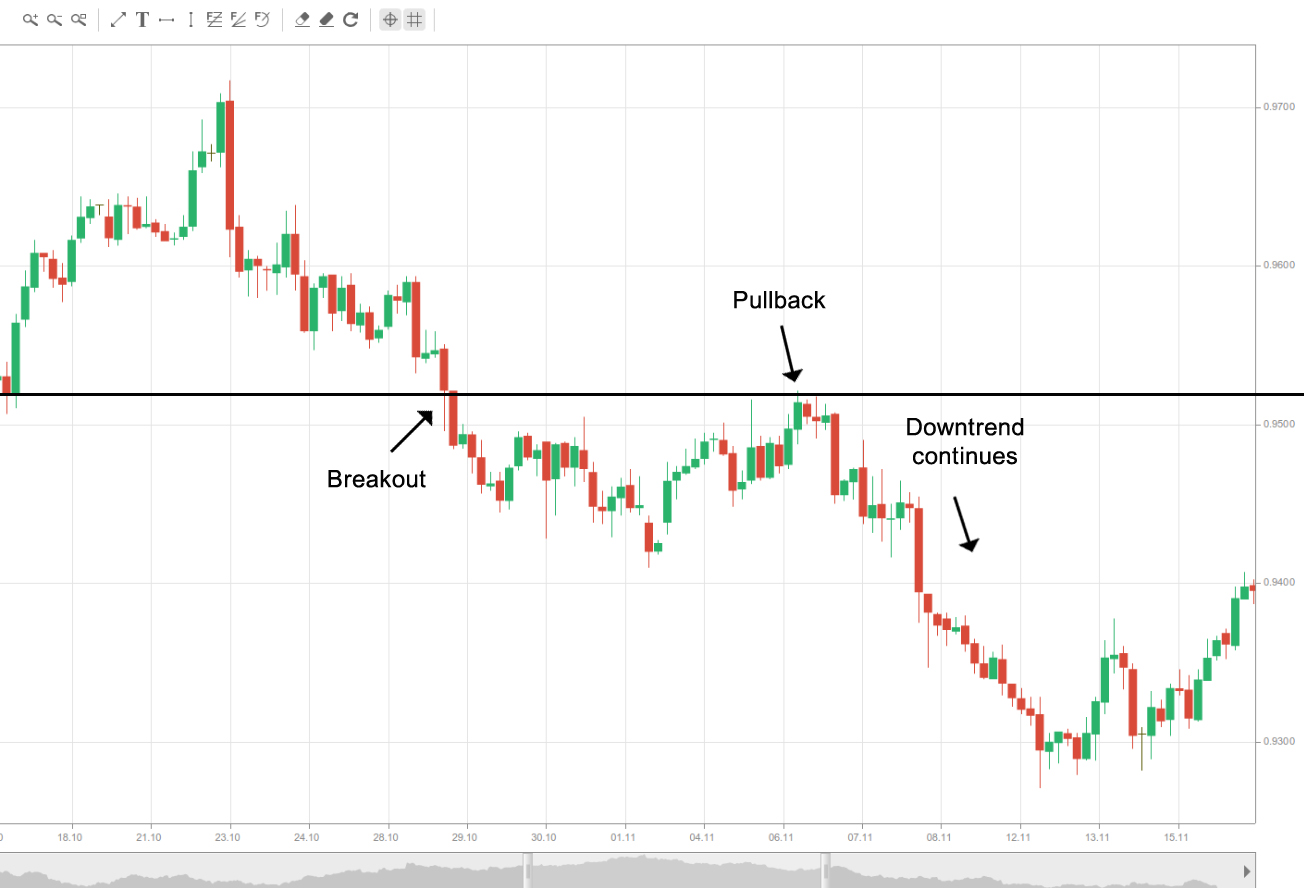 The opposite, throwback, is then a mirror image of the pullback. A throwback occurs when the price breaks above an established resistance, retraces back to that resistance, which however has switched roles and now acts as a support and bounces back up. A throwback is illustrated on the following screenshot. 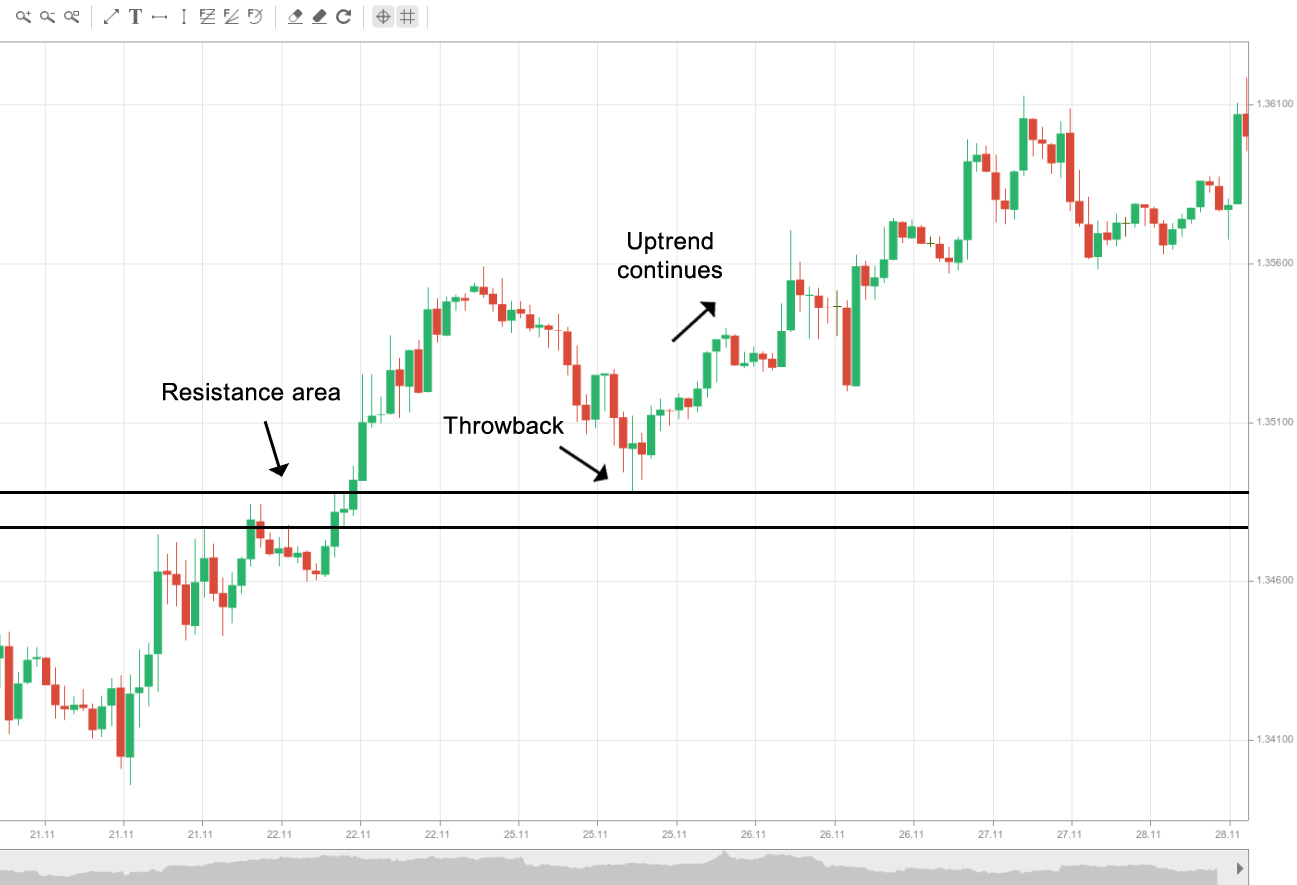 Yes, this setup does seem a little tricky, especially for the novice trader, but there is nothing to worry about once youve studied it and placed adequate stop loss protection.

The pattern plays out like this. As soon as the price breaks through the support or resistance zone, it generates a buy or sell signal and traders tend to enter the trade. However, as the price reverses afterwards and hits the resistance/support level which was recently broken, the position turns into a losing one shortly after weve entered it.

This is where the novice trader gets frightened and panics as he assumes the set-up must be wrong. However, if you are familiar with throwbacks and pullbacks, and of course if you have placed a protective stop below your entry point, you can remain calm, since even if the pattern doesnt play out, you will score only a minor loss. It is even possible that a highly experienced hasnt even entered the market yet, because he/she might be waiting for the price to retrace further through the newly formed support/resistance before it bounces back, earning him/her several pips of extra movement.

What causes the throwbacks and pullbacks

When a price finds resistance at a certain level and later breaks through it, those people who did not anticipate a breakout and went short right before it, accumulated losses as prices surged and broke the resistance level. However, as the price fell back to the previously defined resistance level, those people who went short would want to close their positions after their losses were minimized. And since closing a short position actually means buying the asset, they bring buying pressure back to the market, thus pushing prices up.

As soon as other market players who haven’t entered the market yet see that the previously established resistance level has begun acting as a support, they place long-entry orders (because what they saw is a rebound from a support – a bullish signal). This additional buying pressure, coupled with short covering, further lifts the price and could set the ground for the initiation of an upward trend.

If you look through some previous price charts, you’ll see that these patterns tend to occur pretty often. The price chart areas where most people want to enter a trade are usually the most volatile areas – here prices are consolidating, traders are opening or closing positions, and stop-loss hunters lie in wait. Therefore it is important that we become comfortable with this volatility and also get used to the fact chart patterns most often dont look exactly like the ones in the books, if we want to survive longer on the market.

You should consider remembering the following important guidelines for throwbacks (as pullbacks are the mirror image of throwbacks same is true for them except the direction is the opposite):

Remain calm and dont panic when the market begins to retrace back after the breakout. After the throwback ends, there is a high probability that the initial upward movement will resume.

Unusually high volume tends to improve the chance of a throwback occurring. If a breakout is accompanied by noteworthy high volume, e.g. it is above the 30-day average, there is a good chance for a throwback to happen. The pattern occurs three times more often following an above-average volume breakout than after a below-average one.

If you are a more flexible type of trader, you can buy as soon as the price breaks through the support/resistance and sell after the price has peaked, before the retracement occurs. You can then again enter a long position just after the throwback ends and take advantage of the strong upward movement. This strategy however carries a higher risk, because it is difficult to measure the beginning and the end of the retracement in advance.