Skip to content
Monetary Aggregates
Labor Market and Its Significance

The gross domestic product (GDP) is one of the primary macroeconomic indicators used to assess the condition of a countrys economy. It represents the total monetary value of all goods and services produced over a specific time period – the size of the economy. Usually, GDP is expressed as a comparison to the previous quarter or year. For example, if the year-to-year GDP is up 3%, this is thought to mean that the economy has grown by 3% over the last year.

Economic production and growth, what GDP represents, has a large impact on nearly everyone within that economy. When the economy is healthy, you will typically observe low unemployment and higher wages as businesses demand labor to meet the growing economy. A significant change in GDP, whether up or down, usually has a significant effect on market. Investors always worry about negative GDP growth, because it is one of the factors economists use to determine, whether an economy is in a recession.

How does the GDP indicator affect the Forex market?

Economic data releases are essential for each Forex trader, especially reports of utmost importance like the GDP of a country, which reflects the overall state of the respective economy. Such data create volatility and plenty of speculation is always preceding them. Market players monitor this critical piece of economic data to either enter a new position or add to a current one, but in most cases they use it in combination with other trend-defining factors.

The gross domestic product report holds a lot of weight for currency traders. It serves as evidence of growth in a productive economy, while indicating contraction in an unproductive one. As a result, currency traders will seek higher rates of growth as a sign that interest rates will follow the same direction. If an economy is experiencing a robust rate of growth, the benefits will eventually affect the consumer – increasing the likelihood of spending and expansion. In turn, higher spending will lead to rising prices, which central banks will attempt to tame if they begin to outpace the rate of economic growth (severe inflation arises).

Gross Domestic Product data is published on a monthly or quarterly basis. Responsible for the release of the U.S. GDP statistics is the Bureau of Economic Analysis, a unit within the U.S. Commerce Department. The BEA releases the advanced, preliminary and final quarterly numbers by the end of each month. The agency also publishes its GDP price index which competes with both the personal consumption expenditures and consumer price index as a measure of consumer inflation.

As weve already mentioned, there are three versions of the GDP figures – advanced, preliminary and final. But keep in mind that it is not just the individual releases that matter, rather the relation between them. Experienced market players will first take into account the advanced reading when trading and later they will emphasize any differences when comparing the advanced with the two later readings.

For example, a final release of 2.0% GDP growth compared to advanced reading of 4.5% is worse off when compared to a similar 2.0% print in both readings. An economic expansion figure always fans positive sentiment, but its effect on the markets is at least partially muted when the final GDP figure trails the advanced reading. 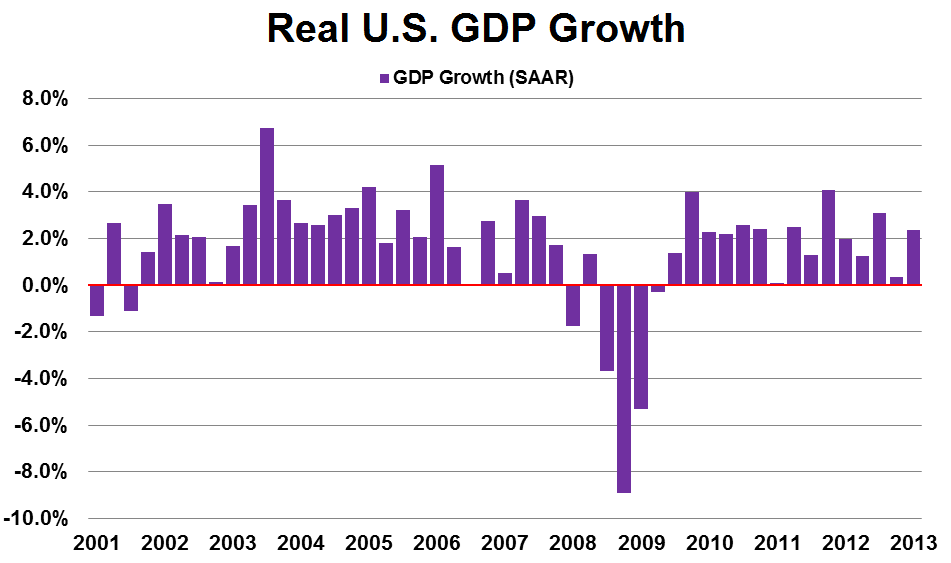 How is GDP used by traders?

There are three basic types of market reactions an investor or trader can expect when it comes to release of GDP figures.

1. A lower-than-expected GDP reading will generally cause a sell-off of the domestic currency relative to its counterparts. For example, a worse-than-expected GDP growth in the U.S. would signal economic slowdown and limit the U.S. dollars appeal since it would reduce the chances of a rise in U.S. interest rates. Additionally, the more an actual GDP reading trails economists projections, the sharper the greenback will decline.

2. A reading matching expectations will require additional analysis and comparison by market players. Since advance and final values match and there is nothing to compare here, the trader will need to collate the current figure to the previous quarters and most often even the previous years reading. This ensures a better evaluation of the current situation but since this analysis is not that straightforward and different investors opinions will vary, you can expect the resulting price action to be mixed as the market sorts out the details.

3. A faster-than-expected economic expansion will generally support the underlying currency versus its trading peers. In our case, a stronger U.S. GDP figure will to benefit the U.S. dollar and allow it to gain positions against its counter currencies. The higher the final GDP reading is, the stronger the support for the greenback will be, therefore the most it will advance.

Markets respond the most to the release of GDP figures from the United States, Euro zone, Great Britain and Japan, because the economic dynamics of these countries have the strongest effect on overall market sentiment and trends. Therefore, traders should diligently monitor the GDP numbers of these countries but the greatest attention should be paid toward growth figures from countries whose currencies you trade. For example, if you trade the USD/CAD pair, economic indicators coming out from the U.S. and Canada will be of major importance for you.

The following graph visualizes how GDP data release could affect EUR/USD. You can observe the downward move of the pair due to the stronger dollar at the time of release of GDP data (13:30 GMT). Data showed 4.1% rise exceeding expectations of 3.6%.

An increase in a countrys Gross Domestic Product of between 3.0% and 3.5% rate generally indicates a healthy economy, while such growth levels are moderate enough to not fuel an excessive inflation risk. Conversely, a falling GDP figure signals economic slowdown with decreasing overall demand, leading to a rise in unemployment and stalling business cycle.