Advantages of Forex Over Stocks

What are the advantages of Forex over stocks?

Which is a better market to trade, the Forex or the Stock? An experienced trader would most likely make money regardless of the market as long as there are enough buyers and sellers in that particular market to produce meaningful trends every day or week or month. In fact, it is always best to stick to the market or few markets that you know best, have tested and most importantly – to choose the one you feel most comfortable to trade.

There are certain specifications of the Forex market that make it superior in a way that it is easier or safer to trade compared to other markets. Among these are liquidity, ease of access, availability of information, flexibility, time constraints and sensitivity to outside events.

Many people are choosing to trade Forex today, as there are many benefits of this trading option. The following are some of the main advantages of Forex trading and the reason for its popularity.

The Forex market is the most liquid market in the world. According to the Bank for International Settlements, the preliminary global results from a survey of Foreign Exchange show that global currency market trading averaged $5.3 trillion per day in April 2013. This figure exceeds by far the combined volume of all the stock markets combined. Furthermore, the liquidity also stays high in the Forex market throughout the trading day. It is so, as every major market or financial center approaches the end of its trading day, trading starts in the next major market. An example of this overlapping quality of the Forex market is, when there are 3 hours left to the close of the London market, New York is just beginning its trading session. We shall discuss trading sessions at a later time. 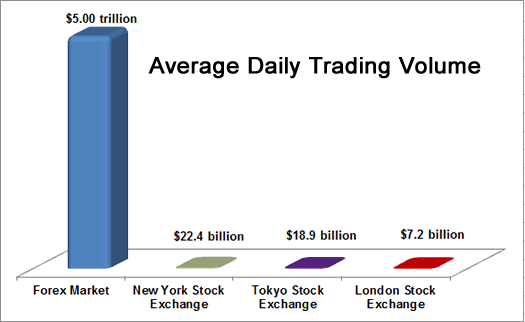 When it comes to selling short stocks, very few people do that, as the core of trading stocks is investing in a longer term. Sometimes speculators get criticized for taking short positions. In the case with currencies, it is much easier to go short a certain currency. The reason for that is selling short a currency is psychologically more acceptable. Additionally, currencies, as we already noted, are traded in pairs. This means that when you are taking a short position in one currency you are automatically taking a long position in the other currency of the traded pair.

Another great advantage of the Forex market is there are several major pairs to trade and follow the news of. You do not get bombarded with information as with the tens of thousands of stocks each belonging to their own sectors and responding to that sector’s news, or any news that is specific to the stock or the company behind the stock. There is just too much research work related to stocks, while following all these different news and variables is almost impossible for a single person.

In Forex, the news following gets to be much more straight-forward. If you trade one pair of currencies, you need to check the most important economic and political news/events of the two countries representing the pair.

Something else worth noting is that, the news for a certain stock could be released before or after the market opens in many cases. Then, the trader has to wait until the market opens in order to take a position which is usually too late for a reaction.

You are able to trade currencies on a highly leveraged basis – up to 900 times your investment with some brokers. This is primarily attributed to the higher levels of liquidity within the currency markets. Mini FX accounts are permitted to trade with just 0.5% margin, or in other words, just $50 allows you to control a 10 000-unit currency position. Futures traders, who are accustomed to margin requirements equal to 5%-8% of the contract value, will immediately recognize that the Forex market provides a much greater leverage than the stock market. Stock traders usually need to ensure at least 50% margin.

In stock trading practice, industry and market analysts sometimes follow closely speculators’ movements. These speculators may operate with a significant amount of capital, enough to cause whipsaws in smaller and less liquid markets. However, the vast size of the Forex market and the liquidity of the major currency pairs, in particular, makes it less susceptible to pressure caused by followers of individual analysts. The Forex market, therefore, is more resilient to manipulation.

When the two sides to a transaction have equal knowledge, both of them will likely be more satisfied with the result. As the Forex market reacts faster to any occurring events, its participants have a greater chance to achieve equal knowledge than in other markets. This characteristic’s advantage lies in the fact that any flawed analysis will have only a short-term effect on the market, rather than a long-term one, because any flaws are revealed by market action itself in a short amount of time.

To sum it up

The Forex market provides you with a fast and accurate execution due to a highly liquid environment, while you are able to trade 24 hours per day with low spreads. This allows you to use very safe and flexible starting amounts, leverage and lot sizes. Stocks, however, have a much more limited trading window and direction, a much higher chance for delays in execution, slippage and price manipulation. Also, trades can bleed your account, as they can be very expensive in terms of commissions, and can carry additional risks due to their fixed starting amounts, leverage and lot sizes.