How to reduce Forex risk in trading. Protective stops

The protective stop is a predetermined point which mark

As we have already explained in the previous article, one of the most important concepts you need to become familiar with when beginning your trading career is money management, or the means of preventing a financial ruin. One of the most popular and important tools of money management traders use to protect their capital are the protective stops.

The protective stop is a predetermined point which marks the maximum loss a trader is willing to sustain on a single position on any trade. It is meant to control trading losses and some refer to it as “money-management stop” since it prevents the complete loss of capital. It relates to the risk-to-reward ratio, or the level of risk a trader is willing to take with his capital when entering a position.

Protective stops are placed by using a stop loss order in the trading platform. This is an order which automatically closes your position, if the price of the asset goes in the opposite direction and falls or rises over a predetermined level, which you dont want to exceed. Therefore, stop losses are vital in protecting the money you have invested and most professional traders agree that all entries must have an inviolate protective stop under all circumstances.

One of the most difficult things when trading currencies and other assets is determining where to place your stop loss order. There is also a high level of discipline involved not to move your stop and take additional risk when the trade does not work out for you. For example, if you have entered a long position and the price begins to drop, you should not lower your stop in an attempt to give the market time to recover and get exposed to a higher-than-the-predetermined risk. By doing that, you let your emotions get the best of you, which is why stops must be set when entering a position and must remain unchanged, even as prices are about to trigger them.

Protective stops are vital, and especially for newbie traders. While professionals have enough experience and are trading for profit by using advanced systems tested over time, people who are new to currency trading have one main goal – survive and gain experience. The longer they are in the game, the more they will learn and improve their skills. This makes stop loss orders a must-use tool in the handset of newbie traders.

Apart from allowing you to minimize losses and stay in the game longer, stops also reduce the stress in trading. Holding a losing position without a protective stop significantly increases the level of stress, which leads to irrational thinking, especially when it comes to unexperienced traders. Moreover, the further the price goes in the opposite direction, the more the stress escalates and begins to dominate your mind.

Bottom line is, by using stop-loss protection you can exit losing positions swiftly with minimum losses and offset them very fast by entering other good opportunities instead of focusing on a losing trade for days and praying for the price to recover.

Each trader has a different system when it comes to determining where to place his/her protective stops. People who prefer technical analysis use levels such as support and resistance and to find the most suitable point for placing a stop loss order, while others use nothing more than the amount of time for which a trade has been open. There are also those traders who dont use technical levels or time frames and instead want to risk a limited absolute amount of money, which is often used in stock trading.

Market players take very often into consideration supports and resistances when placing stops. These levels indicate when a price reversal is likely to occur. The chart below illustrates how a protective stop should be placed below support levels when we have entered a long position. 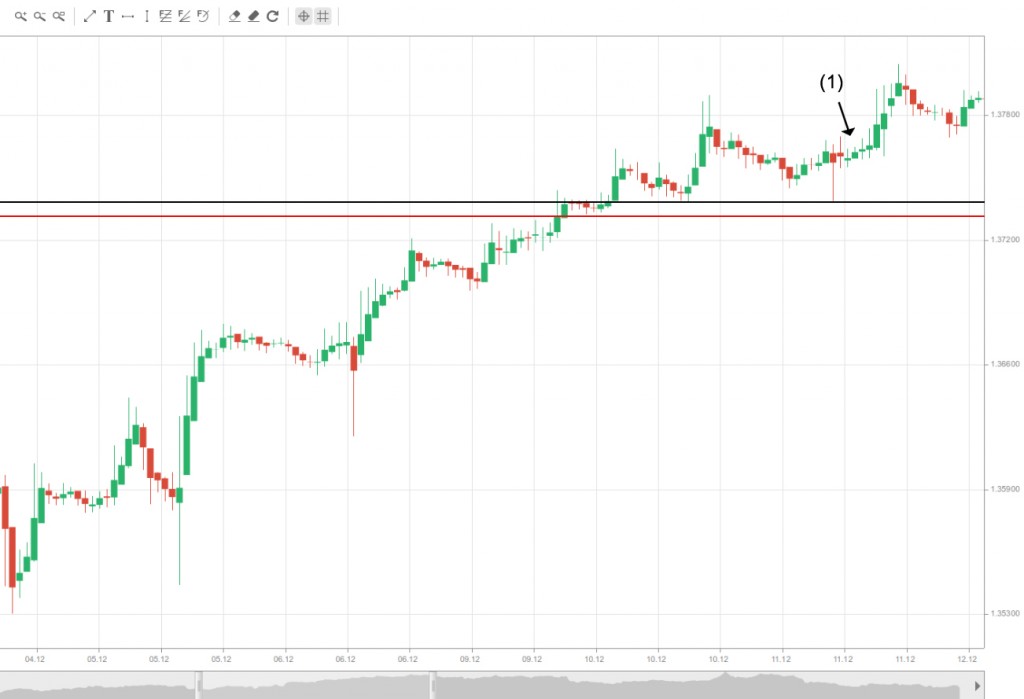 Since a support will likely cause a declining price to rebound and advance, a protective stop should be placed below it. In our case, as pictured on the screenshot, we enter a long position at (1) and the most recent swing low acts as a support level (marked by the black line), therefore giving us a hint where to place our protective stop. Remember to put the stop a certain amount of pips beneath the support level in order not to be triggered by failed attempts to break through the support level or by random noise. The red line marks a suitable price level to put our stop.

The same logic counts for the opposite price movement. If price levels are moving downward and you have entered a short position, you need to place a protective stop several pips above the resistance level.

Also worth mentioning is that whole numbers, such as EUR/USD 1.3000, 1.3200, 1.3500 etc, are broadly considered as support and resistance levels. This means that placing protective stops below and above those prices is also very useful and quite often used. You should keep in mind that breaking through those levels triggers many market players stop-loss orders and causes price fluctuations. 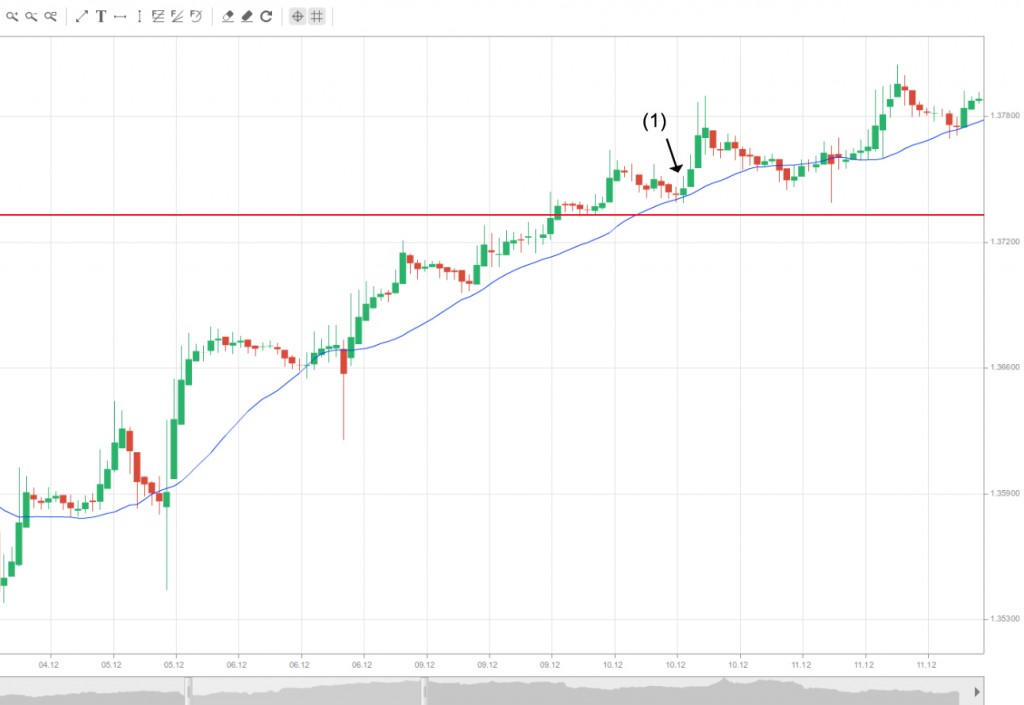 Generally, when prices touch a moving average and rebound, this generates a buy signal if the price movement is upward, and vice versa. Having entered a long position after the signal had been generated, you would want to place a protective stop several pips below the moving average, just the same as when placing it below the basic support level of which we spoke earlier.

In the given example, we made a long entry at (1), right after the price rebound had generated a buy signal while also placing a stop loss several pips below the moving average, so it doesnt get triggered by random movement. As we can see a bit later, there was an attempt to break through the moving average, which however failed and price levels edged higher afterwards. Had we placed our protective stop too close to or at the moving average, it wouldve been touched and we wouldve exited the position at a loss.

Of course, the same logic counts for the opposite price movement. If the current price level is below the moving average and the price touches the MA from below and rebounds back downward, you would want to enter a short position and place a protective stop several pips above the moving average.

Market players also use various trading ranges, such as channels, bands or envelopes, whose boundaries act as support and resistance levels. Usually, prices tend to rebound when hitting one of the two boundaries, keeping them inside the channel or band. However, this doesnt exclude the possibility of a breakout. In order to protect yourself, you should be placing a protective stop below the lower band or above the upper band, again based on the type of position – long or short. 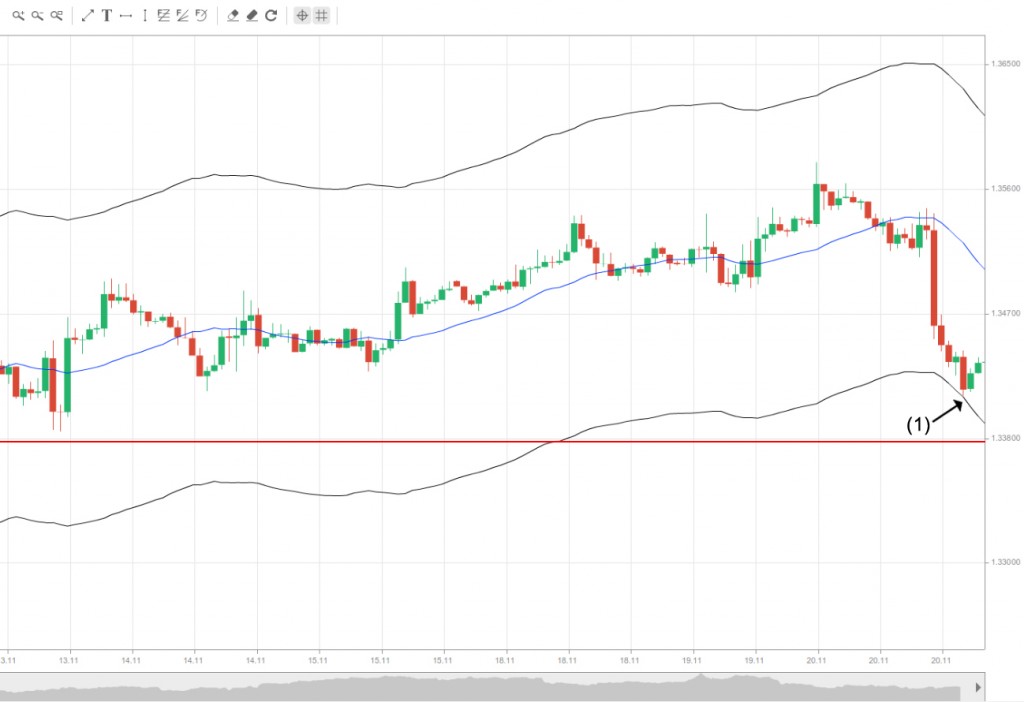 On the screenshot above you can see a price rebound from the lower boundary of the SMA envelope, which provided a signal for a long entry, at (1). When entering the trade, you can protect your position by placing a protective stop below the lower boundary, which would limit your losses, if prices unexpectedly decline and break through the channel or band. As in the previous cases, the same logic counts when entering the opposite position. Remember to leave a certain amount of pips in space between the boundaries and the protective stops, so that failed attempts for breakouts or random noise dont trigger them.

A general rule when deciding where to place stop-loss protection is to look for a certain point characterized by the following:

– the market has reached a level which has rebutted your initial planning and reasoning
– there is a greater probability that the market will continue moving against your position and is therefore wiser to exit the trade.

There are several factors which must be taken into account when placing a protective stop but their interpretation is strongly individual and vary according to everyones personal style of trading. Such guidelines are:

– Risk – defines how much a person is willing to lose in a trade. Most professional traders advise novice market players to not risk more than 1-2% of their capital in a single position.

– Risk-to-reward ratio – based on the type of trading style a trader uses and market conditions. Favorable conditions allow you to give your position more room, while riskier assets require tighter stops.

– Volatility – measures the price range an asset fluctuates in. Stop-loss protection is used to minimize losses, but if you place your stop too close to the current price especially at times of increased volatility, it may be triggered by random noise. There is also the risk of slippage, an event which was thoroughly explained in the article “What to Look for in a Trading Platform”.

– Position size – if the amount of money you have invested in a position is too big, then each pip of movement will be fairly large compared to the total money in your trading account. This relates to the risk exposure. A tighter stop is suggested in this case, but as logic dictates, it could be triggered easier, even by random movement.

– Trading capital – the position size is linked to the amount of trading capital you own. If your trading account is under-capitalized, you will be forced to use tighter stop-loss protection to avoid losing a large part of your funds in a single trade. This means that traders who want to enter larger positions need to start with a well-capitalized account.