Skip to content
Other Kinds of Stops – Signal, Time, Targets, Execution
How to Choose the Right Leverage?

Scaling in and out of trades in Forex

caling out of a trade is used for achieving similar go

In the previous sections of the chapter weve talked about what money management is, what makes it so vital and weve explained some of the most popular ways to reduce the risk in trading. Now it is time to turn our attention to the so-called scaling in and out of trades.

Scaling is a method of money management allowing you to limit potential losses and maximize potential profits, despite the fact the future price movement is uncertain. Scaling means gradually increasing or decreasing the value of your position while trading. This allows you to increase your profit, reduce risk and limit losses when the market turns against you. Of course, scaling in and out of trades requires proper money management, discipline and sound reasoning, otherwise you can lose, just like when using any other strategy.

There are two types of scaling – scaling in and scaling out of trades. As with every other trading strategy and money management method, scaling has not only its advantages, but also drawbacks, which will be discussed later. Let us begin explaining each one of the two types.

Scaling into a trade means opening a position with just a fraction of the capital you initially intended to commit yourself with and then enter more positions, if price levels move in your favor. Scaling in is just an option, you can choose not to use it, if you dont want to, but it has several considerable advantages, which make its utilization useful.

First, you reduce the total risk of your trade. By scaling in you commit with only a fraction of your funds upon entry in the long position. In the example provided with the screenshot below, instead of going long with one standard lot, you can enter a position by committing yourself with a fifth of it or two mini lots, in our case at (1) (weve explained what a lot is and what the advantages of the lot systems are in the article “Advantages of Using a Demo Account“). By doing so, you risk losing a lot less money, if the price turns against you in the beginning. 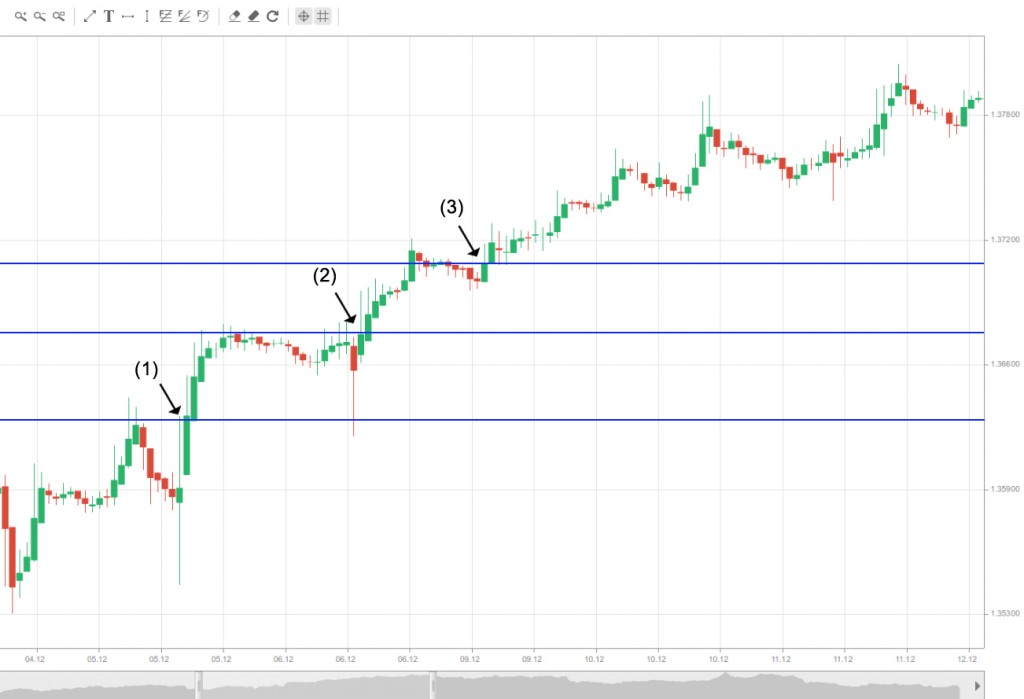 If the trade however moves in the desired direction, you can add to the position lets say another 4 mini lots after a pullback has ended, in our case at (2), bringing the total amount to 6 mini lots. If the trade continues to go well, you can add the last 4 mini lots after the next pullback, at (3), thus reaching your initial goal of investing 1 standard lot in the position. This of course means that you would profit less, compared to if you entered with the full standard lot, but it also means you would have lost less, if prices had turned against you.

If the trade continues to go in your favor after entering the standard lot, you could add more funds to the position than initially intended once you are in profit. But this move should be backed by raising your protective stop to the initial entry point, thus removing any risk of losses out of the market.

Second, scaling in allows you to choose the best entry point for your trade. It is quite possible that your analysis of the current market situation is correct, but you havent chosen the most suitable level to enter a position. Scaling in gives you more time to assess the situation. Very often you will have 2 or 3 favorable entry levels and sometimes the area is not a precise price rather a range, especially on hourly and bigger time frames. This is why scaling in allows you to enter a trade even if youve missed the perfect entry level and still manage to achieve profits.

Disadvantages of scaling into trades

However, it is worth considering that scaling into a trade also has certain disadvantages, which is the reason why not everyone is using it. The main downside of this strategy is that poor money management can lead to an increase in overall risk exposure, which could be devastating for your account, if a sudden price reversal occurs and you havent limited losses through protective stops.

As the current price moves further in your favor and your confidence grows, it becomes much easier to exceed the initially intended amount of money. Distracted by their temporary success, some people keep adding more and more mini lots to their positions over time, up to the point the amount of money they have invested in the trade has exceeded the general rule not to risk more than 1-2% of your total capital on a single bet.

This of course carries a big risk, especially for newbie traders, as the danger of a sudden price reversal against you always lurks around and the bigger the risk exposure is, the more money you can lose. Such a reversal is illustrated in the screenshot below. 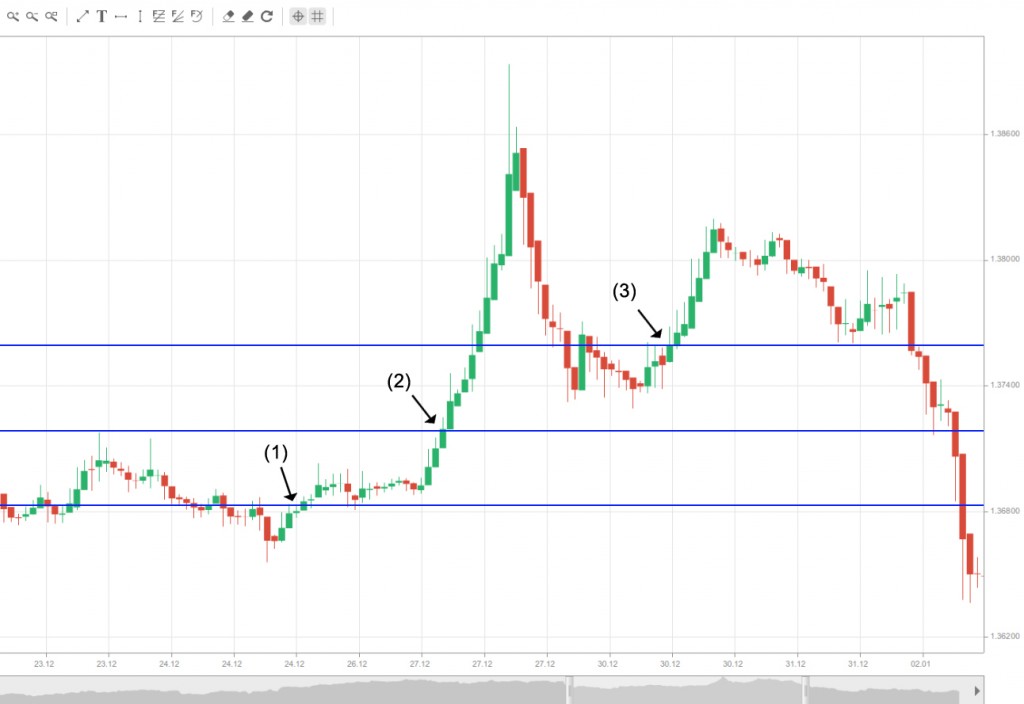 In our example, the trader has entered a long position at (1) with a fraction of the total amount he intends to invest. Seeing how the market moves in the desired direction, the trader adds to his position another fraction at (2). After a significant rise and the following pullback, the trader decides to further add to his position at (3), as he expects prices to regain strength, which happens as well. Closely after however, a significant price reversal occurs, which basically wipes out the whole position and turns into a loss.

Another drawback of scaling in, which is illustrated in the example above, is that when you enter a trend that has already been established for some time, the later positions you enter (the later mini-lot additions in our case) are exposed to a higher degree of risk because the trend may be coming close to an end. That is why you should be cautious when scaling into trades in a trend that has existed for a while.

Scaling out of a trade is used for achieving similar goals as scaling in – risk reduction, lock in profits, limit losses. Scaling out means to sell a fraction of your total exposure after your position has become profitable, thus locking in some profit, while leaving other positions open in order to benefit, if prices continue to advance.

The screenshot below illustrates how scaling out can protect you from the sudden price reversal, which wiped out our entire profit in the previous example when we scaled into the trade. 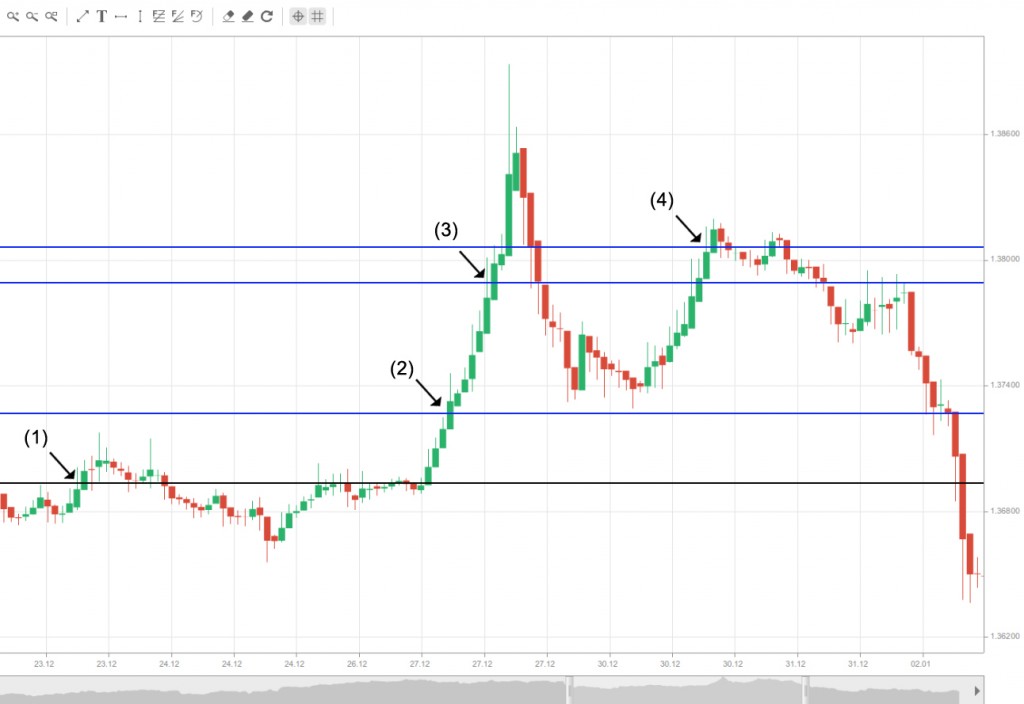 In order for scaling out to work, the market must be trending. The main goal of using this technique is to stay with the profit and avoid a loss situation as much as possible. In order to begin scaling out of a trade you must first reach the breakeven point of your trade relatively as soon as possible and after you are on the winning side, you can begin exiting positions and lock in profits.

Illustrated on the screenshot above, you can see our long entry point at (1). After the initial downward movement had ended and we were on the winning side, the first exit was taken out of the market at (2), thus securing some profit. However, leaving the two other positions standing open allows us to take advantage, if prices advance further. At the same time, an unexpected price reversal which would otherwise affect our whole trade, would have a less significant impact on our trading session as we have already reduced our risk exposure and locked in some profit. As the price continues to advance, we exit another position at (3), thus further securing our trading success. The following pullback does not have such a significance for us, and after prices have rebounded back, we close our last standing position at (4). Even if we had left it open, the upcoming sudden price reversal would have a very diminished impact on our trading account, given the low risk exposure.

A negative aspect of scaling out worth mentioning, which especially novice traders find disturbing, is a market which continues to move in your direction and even speeds up significantly after your initial exit. This might upset new traders, but it shouldnt really bother you, if you have followed your trading plan, as in many other cases it would protect you from a price reversal.

This money management method, just as the scaling into trades, reduces your overall profit. Logically, you would end up winning more, if your entire position benefited from the full duration of the upward move, not just a fraction of it, but the risk reduction you get in exchange offsets that loss. The scaling technique is especially suitable for novice traders as it will allow them to stay in the game for longer, but it is vital to be combined with proper discipline and appropriate money management.

Other Kinds of Stops – Signal, Time, Targets, Execution
How to Choose the Right Leverage?