Supply and Demand in Trading

to supply and demand law, it is obvio

The Forex, Stock, Commodity or any other free traded market in the world, is driven by supply and demand. Understanding the principles of supply and demand is of utmost importance in the market, as it is the main force that moves the price of an instrument, up or down.

On top of that, obtaining a good understanding of the concept of supply and demand will make all the difference while you need to look through the cannonade of news, which comes out every single day and select those news/events that you consider to be the most relevant.

People tend to value assets, which are in low supply such as diamonds. But, if they take into consideration rocks, the conclusion drawn is quite obvious. Rocks are of very little value, simply because people can find them everywhere around them. Thus, we can say that the supply of rocks is quite high on a global scale. As one simply walks down the street, he/she can choose from a vast variety of rocks.

But if we take the case with diamonds, they usually have a huge value, as they are rare, they are not so commonly found in circulation. Its a simple example, but yet, not far away from the market logic.

Demand represents the extent, to which a certain asset is wanted by participants in the market at any time. For example, when it comes to currency trading, demand usually cause quite the opposite effect on the value of a given currency than the scenario we mentioned above. In case the demand for a certain currency heightens, this will cause the currency to gain additional value. The opposite is also valid, in case the demand for a certain currency lowers, this will usually cause the currency to lose a portion of its value.

Several key assumptions are required in order to make this concept reliable: First, product differentiation does not exist – there is only one type of product sold at only one price to each consumer. Second, in this closed scenario, the item of interest is a basic want, but not an essential human necessity such as food or water. The last assumption we make is, that the good does not have any substitutes and consumers project that prices will probably remain stable in the future.

A market is always in one of three states.

First, demand exceeds supply, which implies that there is competition among participants in the market to purchase and this subsequently causes prices to increase.

Second, the market can be in a state where supply exceeds demand, which implies that there is competition among participants to sell and this subsequently causes prices to plummet.

And third, the market can be in a state of equilibrium, where there is no competition among participants to buy or sell, because the market is at a price, which enables everyone to purchase or sell as much as they are willing to. This scenario presents the optimal economic condition, where both consumers and producers of goods and services are satisfied. 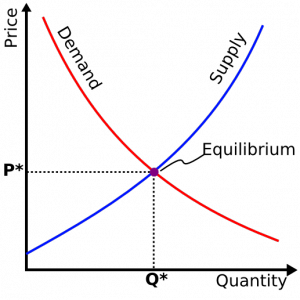 We will provide an example with oil prices in order to illustrate how supply and demand work together and affect global economy. In case demand for crude oil increases or supply of crude oil decreases, prices of oil futures will usually surge. As crude oil prices increase, prices of gasoline react almost immediately and surge as well. As prices of gasoline increase, consumers are forced to spend larger amounts of money in order to drive themselves from, say, point A to point B. And as they spend increasing amounts on oil-based products, they eventually end up having less money than before the surge of oil prices. It is useful to mention, that these factors, which influence the budget of an individual, also impact the budgets of the most renowned corporations and influential governments worldwide.

Let us take Japan as a country, which suffers from high oil prices, as it imports almost all of its oil. This means that every single barrel of oil Japan needs in order to develop its industry, it should buy at some price. Furthermore, Japanese economy is reliant on countrys ability to export the goods it produces to its trading partners, such as the United States and China. Every car, smartphone, and computer produced in Japan is becoming increasingly money-consuming to deliver to consumers, as oil prices rise. In this case, the country experiences a double strike. First, it needs to import 100 percent of its oil at inflated prices and then it needs to pay inflated prices in order to deliver 100 percent of the goods it produced.

According to supply and demand law, it is obvious in what way an eventual increase in prices of oil would influence the value of the Japanese currency. Oil is always priced and sold in US dollars, so with prices of this commodity rising, purchasers in Japan will need to convert larger amounts of Japanese yen into US dollars in order to pay for oil. In this case the supply of Japanese currency will be increased in the market and this would cause the Japanese yen to lose value.

As a result from all this, Japanese goods would appear to cost more and fewer people would be able to afford them. Demand for the Japanese yen would decrease, because the fewer goods people purchase, the fewer Japanese yen they need. The combination of increasing supply and decreasing demand would result in the devaluation of the Japanese currency.

This example of oil impacting the yen reflects in what way supply and demand could affect currency markets.

Introduction to Trading and Speculative Markets
Types of Financial Markets