Positioning according to central banks interventions

Central bank interventions are one of the most influential drivers of the Forex market. They cause wide fluctuations both in the short-term after being announced and in the long-term, since intervention programs usually continue for a prolonged period of time. Despite their significance, however, some short-term traders tend to ignore these events and focus only on regular everyday economic releases, which is a mistake.

Regardless of a traders short-term focus, he should also keep a lookout on the general macroeconomic picture of the economy, whose currency he is trading. Moreover, central bank interventions in G-7 countries have a strong impact well above the national level due to these economies dominating positions on the international trade scene. And because interventions have such a strong impact on national and above-national level, they tend to cause not only a simple price change for a couple of days, but reshape the sentiment and expectations towards a currency for months to come, and in some cases even years.

Short-term traders may experience intra-day currency moves as wide as 200 pips, if the central banks decision has caught markets off-guard, while long-term traders may observe a 180%-degree change in sentiment and the current trend, if policy makers have agreed upon a shift in the banks stance.

Many day traders succeed in using upcoming policy changes to their favor. The latter are usually announced at scheduled meetings, which central bankers hold several times per year. Unscheduled policy meetings can also be organized when extraordinary circumstances require so, but they usually dont tend to surprise traders as the central bank typically gives enough indications through reports and media announcements that a shift in policy might be at hand. Moreover, the interventions direction is typically known as well since policy makers tend to issue several warnings (verbal interventions), if the national currency is becoming too weak or strong.

These warnings give traders enough time to assess the situation and predict when a possible intervention might come, allowing them to enter proper positions or to stay out of the market. This of course reduces the actual moves initial strength as many traders expectations are already “priced in”, but the magnitude of such events is significant enough to ensure solid profit potential.

However, as clear as interventions usually are for future market developments, there is always the possibility of an intervention-fueled rally or sell-off to be reversed shortly after by speculative selling or buying. Whether the market counters the central bank and offsets the initial price movement depends on a number of factors, including the size of the intervention, its frequency (whether its a one-off move or a recurring one), its success rate and whether it is backed by fundamentals or not.

However, the majority of traders, and especially the novice ones, should avoid fading (betting against) interventions. Weve advised numerous times that the best and most secure way to profit from trading is to follow the trend, in our case the interventions direction, and always use protective stops. Although intervention after-effects are commonly one-sided, it would be wise to always keep your stops up as they would protect you from a misjudgment, especially when the intervention is at risk and speculators have a chance of fading the central bank.

Central bank interventions are very often seen in emerging economies as they need to keep their currencies at weaker levels in order to ensure competitiveness on the international trade scene, which boosts exports and stems economic growth. Thus, the rarity of interventions by the most developed countries central banks, and most importantly the G-7 countries, makes their occurrence even more important from a global point of view as they would aim to conduct serious policy changes.

The most significant interventions among the developed economies in the recent years can be seen in the United States and Japan, but also in the United Kingdom and the Eurozone. Apart from previous policy moves the Bank of Japan had made in the last decade in order to spur economic growth, BoJs new anti-deflation policy sent waves through the global financial system as the yen hit record lows versus both the US dollar and euro.

The BoJ set the “price stability target” at 2 percent in terms of the year-on-year rate of change in the consumer price index (CPI) in January 2013, and has made a commitment to achieve this target in the earliest possible time window through a program far exceeding the scale of Feds Quantitative Easing. Below you can see the weakening of the Japanese yen in the last two years relative to the US dollar. 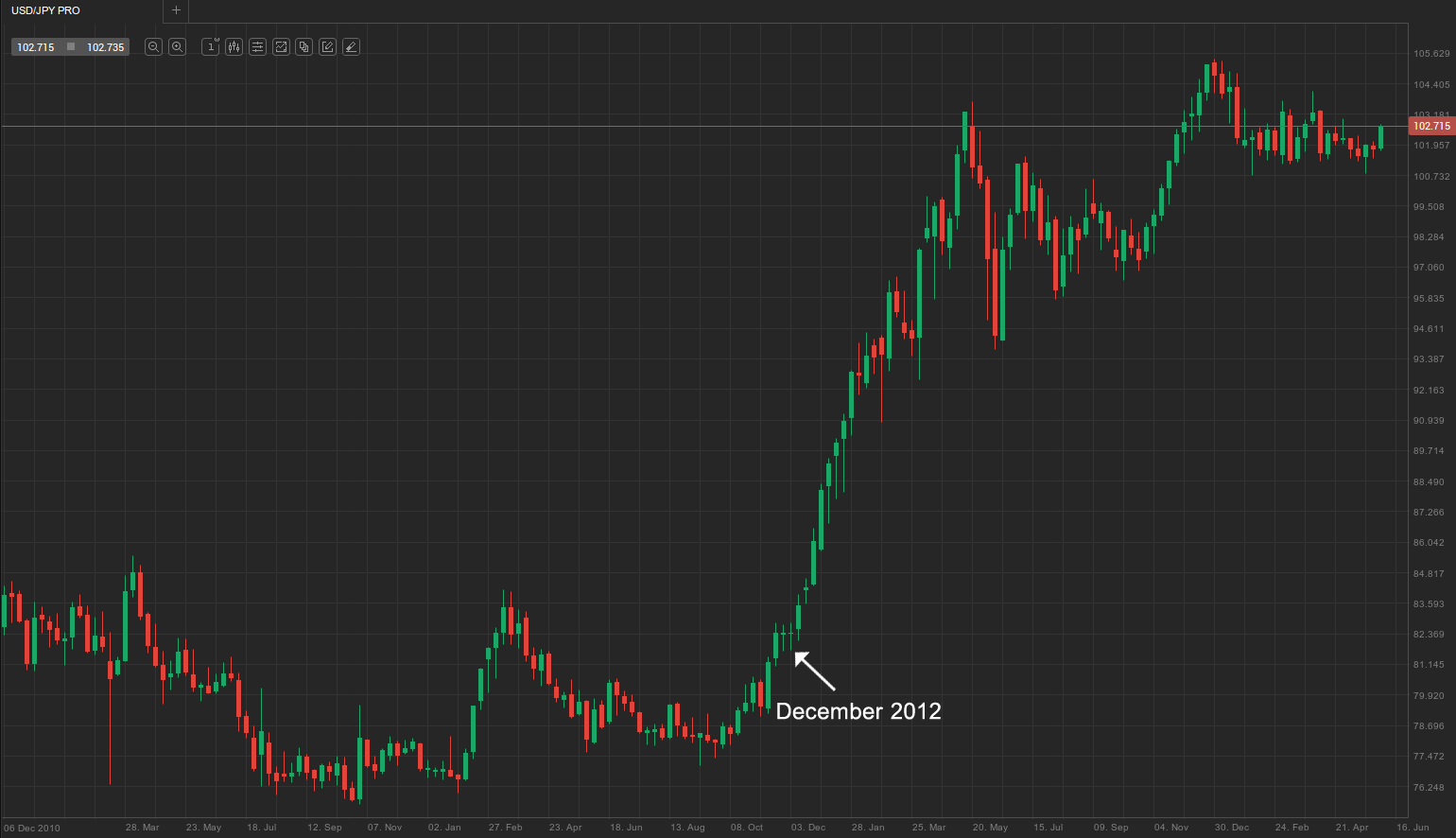 Continuous measures to weaken the Japanese yen were needed as suffering exports dragged on economic growth. Given the threat of a constantly appreciating yen as investors seek relative safety while uncertainty in Europe remains at hand, BoJ Governor Haruhiko Kuroda, who took the lead in March 2013, announced a decisive break with his predecessors policies. He said the BoJ will double the amount of currency held by banks and individuals within his first two years of office in order to reach the 2% annual inflation target. On April 4th 2013, the Bank of Japan announced it will expand its asset purchasing program by $1.4 trillion in two years.

After the plunge in the 2007-2008 financial crisis, the Federal Reserve lowered interest rates, but additional measures were required to spur growth. The Federal Reserve held between $700 and $800 billion of Treasuries on its balance sheet before the crisis. In November 2008, the central bank began the first round of its Quantitative Easing program and started purchasing mortgage-backed securities (MBS). By March 2009, it held $1.75 trillion of bank debt, MBS-es, and Treasuries, followed by a surge to $2.1 trillion by June 2010. The purchases were paused for a short period of time as economic conditions improved, but were resumed in August 2010.

The second round of purchases was announced in November 2010 and consisted of buying $600 billion of Treasuries by the end of the second quarter of 2011. The third round was announced in September 2012 as policy makers agreed to begin purchasing $40 billion in mortgage-backed securities, but the amount was raised at the December 2012 Federal Open Market Committee meeting to $85 billion per month.

In the summer of 2013, ex Federal Reserve Chairman Ben Bernanke announced policy makers are expected to begin gradually reducing Feds bond purchasing pace by the end of the year, presumably in September. Market players were caught off-guard as the Fed decided to hold-off the tapering, but they surprisingly trimmed the monetary stimulus by $10 billion to $75 billion at their December meeting and vowed a reduction of another $10 billion at each successive meeting. On the screenshot below you can observe the sideways movement of the US dollar index as the greenback largely fluctuated based on policy makers announcements and decisions. 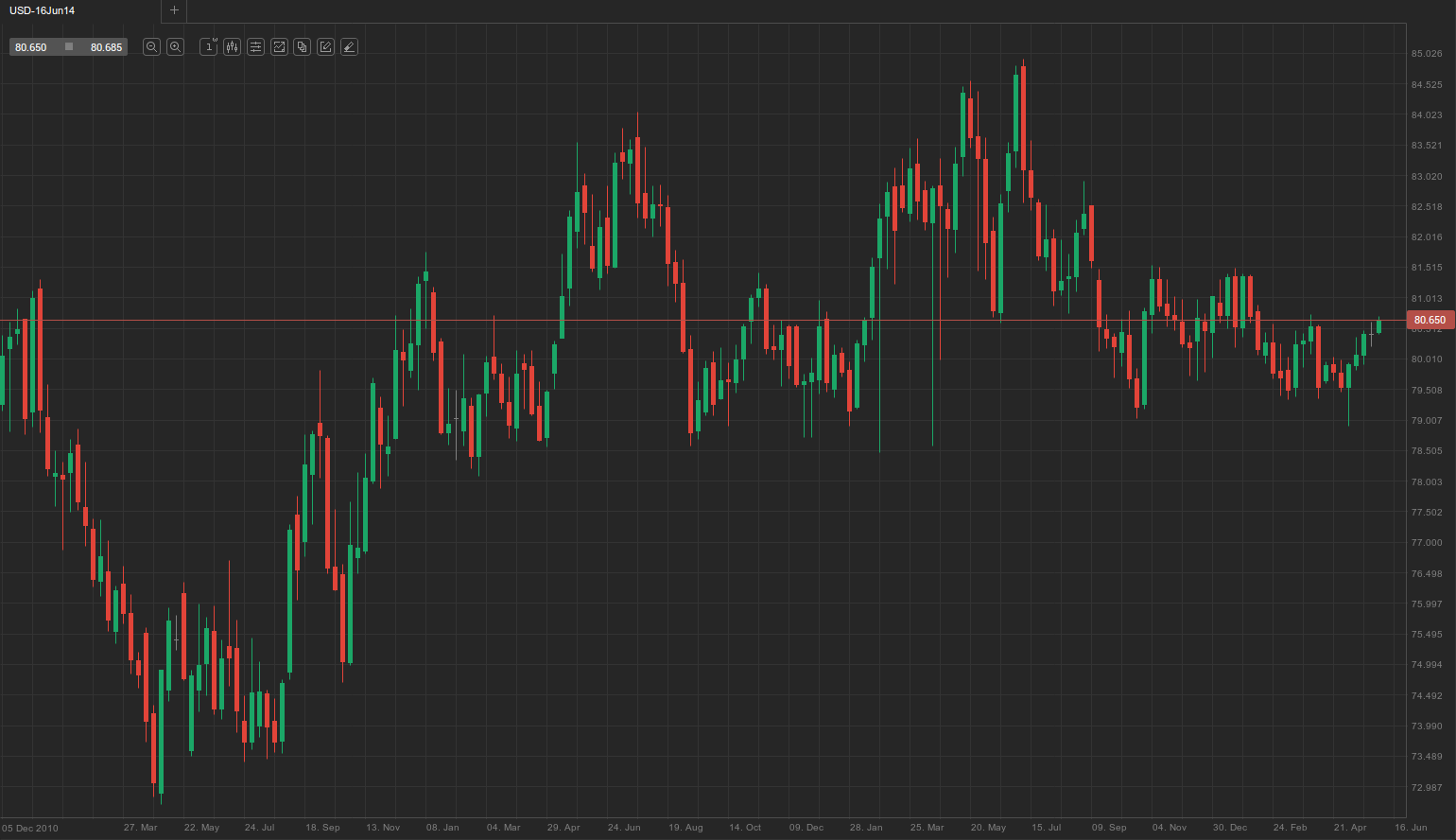 Thus, day traders should closely follow all announcements by central bankers, especially the ones with vote on FOMC meetings, in order to capitalize on the currency fluctuations. Substantial volatility is usually observed during speeches of the Federal Reserve Chairman, as well as before, during and after the Federal Open Market Committee meetings and the later release of the Federal Reserve Minutes.