Positioning according to changes in commodity prices

As we have mentioned in the Major Currency Profile section of our day trading guide, there is a very strong correlation between certain commodities and a number of currencies, which is why they are known as “commodity-based” currencies. These are the Australian dollar, the New Zealand dollar, the Canadian dollar and the Swiss franc.

We have already discussed that the Australian, New Zealand and Canadian dollars are strongly correlated to commodity prices due to their economies high reliance on exports of raw materials (especially CAD to oil) and the close ties between New Zealand and Australia. All three of them have solid correlations with gold prices, while the Swiss franc is historically tied to the precious metal due to a past constitutional requirement stating that 40% of the national currency should be backed by gold. Although it has been removed, the connection between gold and the franc remains rooted in Swiss investors’ mindset.

Even though we havent spoken much about commodities trading, it will suffice to say for now that they are also priced on the supply-demand principle. However, different raw materials are influenced by varying factors which affect their supply and demand. For example, wheat prices can surge, if weather agencies predict unfavorable conditions in Ukraine, Australia or any other major producer. At the same time, if a country bans the imports of a certain strain of wheat, for example produced in the US, this would have a negative impact for US wheat prices as demand for US shipments declines and stockpiles rise. There are many peculiarities in commodity trading, but in general oil and golds price movements are fueled by similar fundamental factors as currencies.

The strong correlation between gold and those four currencies is also based on the US dollars inverse relation to the precious metal. Although the US is the worlds third-biggest producer of gold, rising gold prices do not raise the value of the greenback, rather the opposite. This is due to the yellow metals status of safe haven, which investors seek during times of economic and political uncertainty as they stray away from the greenback. Conversely, during times of economic prosperity the dollar appreciates as investors risk appetite draws their capital out of gold and into more riskier assets. This is why gold is referred to as the “antidollar”. So, as the greenback declines and gold goes up, AUD/USD and NZD/USD tend to mirror the metals movement, while USD/CHF moves the opposite.

But as we said, there is more to it. In 2013, Australia was the worlds second largest producer of gold at little over 250 metric tons, while Canada ranked 7th with an output of around 120 tons. Based on the substantial value of gold exports and also the inverse relation of the metal to the US dollar, the AUD/USD cross has a very strong positive correlation with gold (close to 0.8).

Rising gold prices have two implications on the pair – first, if gold is gaining on the back of economic uncertainty, the US dollar has likely already begun to drop, thus AUD/USD should be on the rise. Second, rising gold costs will force importers of Australian gold to purchase more Australian dollars in order to pay for the higher gold prices, thus the higher demand will further appreciate AUD. Also worth taking into consideration is that the Australian dollar can be used in carry trades, which we discussed in the article “Carry Trades”. This means that when gold and AUD/USD go up, many traders prefer to invest in the currency pair instead of the metal as both express the same view of market conditions, but the Australian dollar can yield additional return through the carry trade. On the screenshot below you can observe the positive correlation between the Australian dollar and gold. 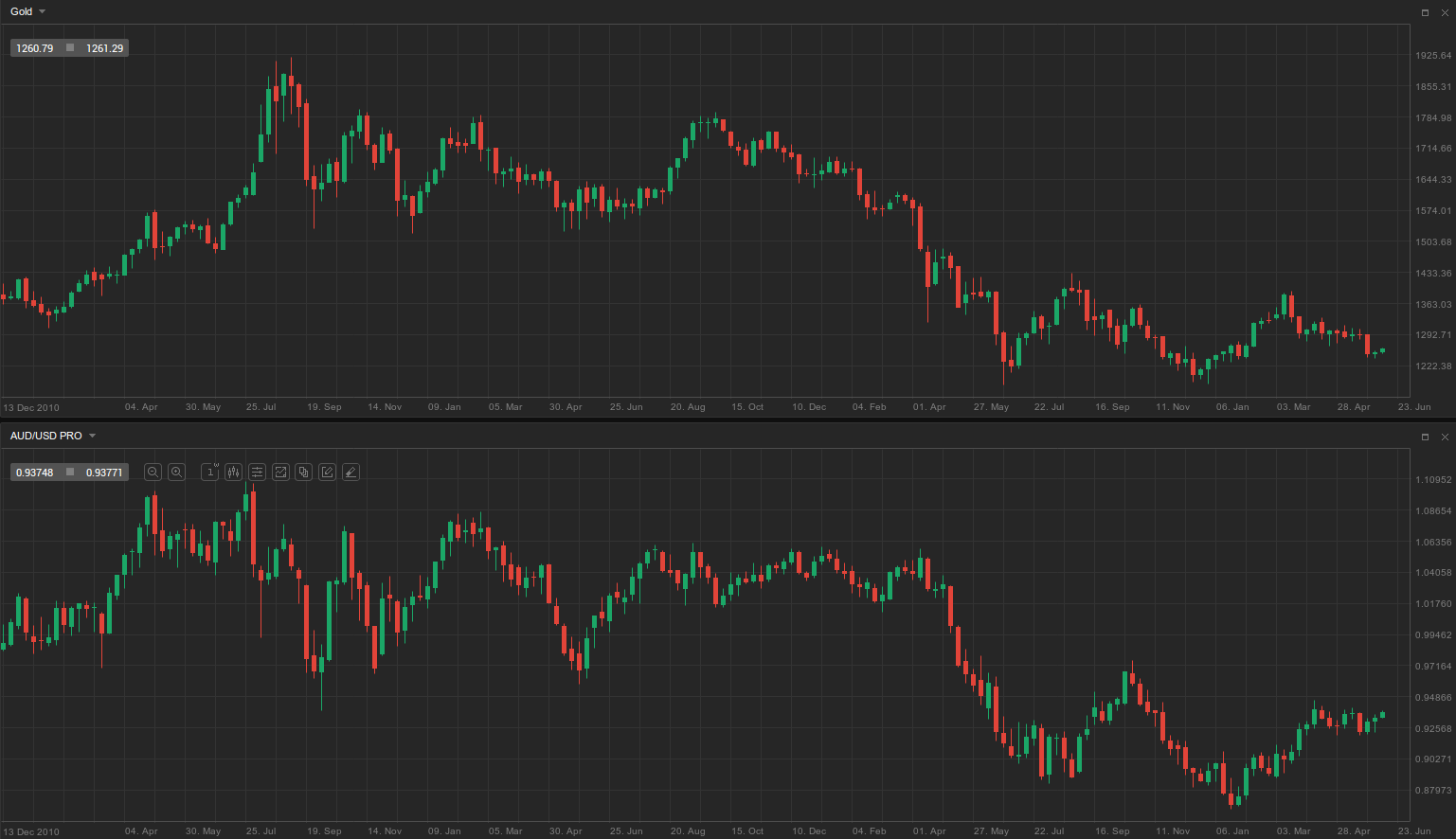 The same principle is in force for the Canadian dollar and it has relatively the same correlation with gold. As for the NZD, although New Zealand is not a major gold producer and ranked 25th in 2006 with an annual output of little over 10 metric tons, its close ties to the Australian economy is behind the NZD/USD pairs positive correlation with gold.

Among the four commodity-based currencies, the Swiss franc has the the strongest correlation with gold (close to 0.9). However, the positive relationship is of different nature, because Switzerland is not a gold producer, and unlike New Zealand its economy is not closely linked to any major gold exporter. The reason is the Swiss francs historical connection with gold. Under a legal requirement, which was removed via a referendum on May 1st, 2000, 40% of the Swiss currency had to be backed by gold reserves. Regardless, the Swiss francs status of premier safe-haven currency has retained its strong positive relation to gold, largely abetted by the countrys political neutrality and confidential banking system which attract foreign capital during times of political and economic turmoil.

Due to the global economys reliance on oil and sensitivity toward major shifts in prices, there are very complex and miscellaneous correlations between oil and currency pairs. Out of the four commodity-based currencies, only the Canadian dollar has a more stable and pronounced relation with this raw materials prices and here is why.

Canada was the worlds fifth-biggest oil producer in 2012 with an output of 3.856 million barrel per day, trailing only Saudi Arabia, the United States, Russia and China. Canadas most exported product is crude petroleum, while refined petroleum ranks third and petroleum gas fifth, accounting for 16%, 4.1% and 3.7% of total outbound shipments, respectively. Thus, poor economic conditions in its trade partners, especially the US, will drive demand for oil down and therefore have a negative impact on the Canadian dollar, and vice versa. At the same time, the cold Canadian climate spurs demand for heating oil throughout the year. On the screenshot below you can see the correlation visualized. 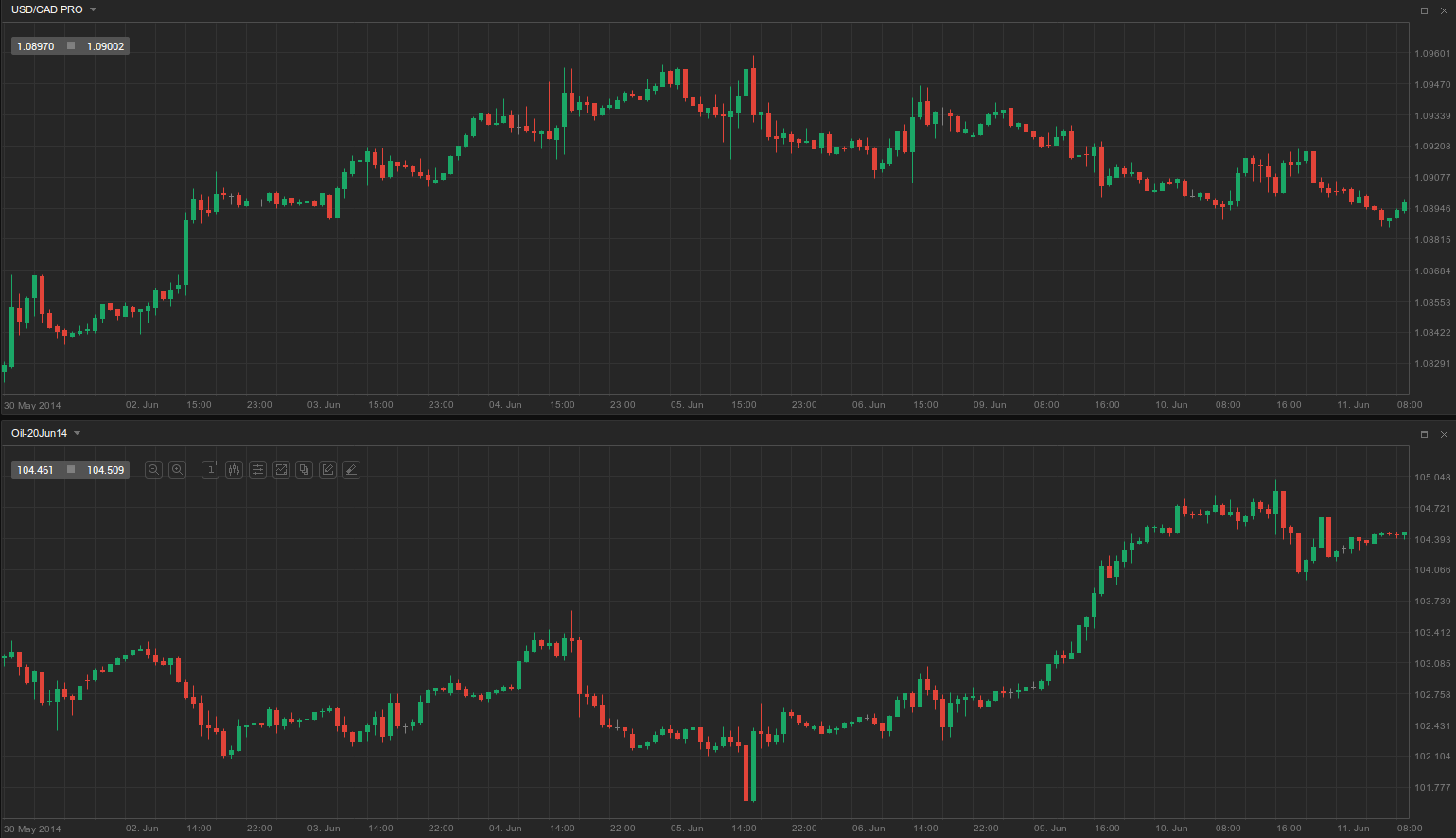 Having acquainted you with the connection between gold, oil and commodity-based currencies, you can understand why many traders use prices of raw materials as leading indicators for currency price movements. As we mentioned earlier, expressing their view on commodities over currencies also allows them to benefit from interest rate differentials (carry trades), which is what many traders would aim for. This is clearly visible on the two examples provided above. Some traders also use other commodities as leading indicators, similar to the relation between gold, oil and currencies, which helps diversify risk.