Positioning according to equity market movements

There is a certain positive correlation between gains in equity markets and currency appreciation stemming from investors risk appetite rising during times of economic prosperity. As robust economic growth boosts sentiment and investors no longer seek capital retention, rather higher return, both equities and carry trades rise in popularity because they accomplish just that. Conversely, during times of economic uncertainty and global risk aversion, equities and carry trades are less favored. However, the connection between movements in the equity and Forex market are not simply straightforward and may sometimes deceive you. Moreover, it is not clear changes in which market are the ones fueling moves in the other. Sometimes the Forex market leads the equity markets, while in other occasions equities trigger a move in currencies.

Correlation within the equity markets 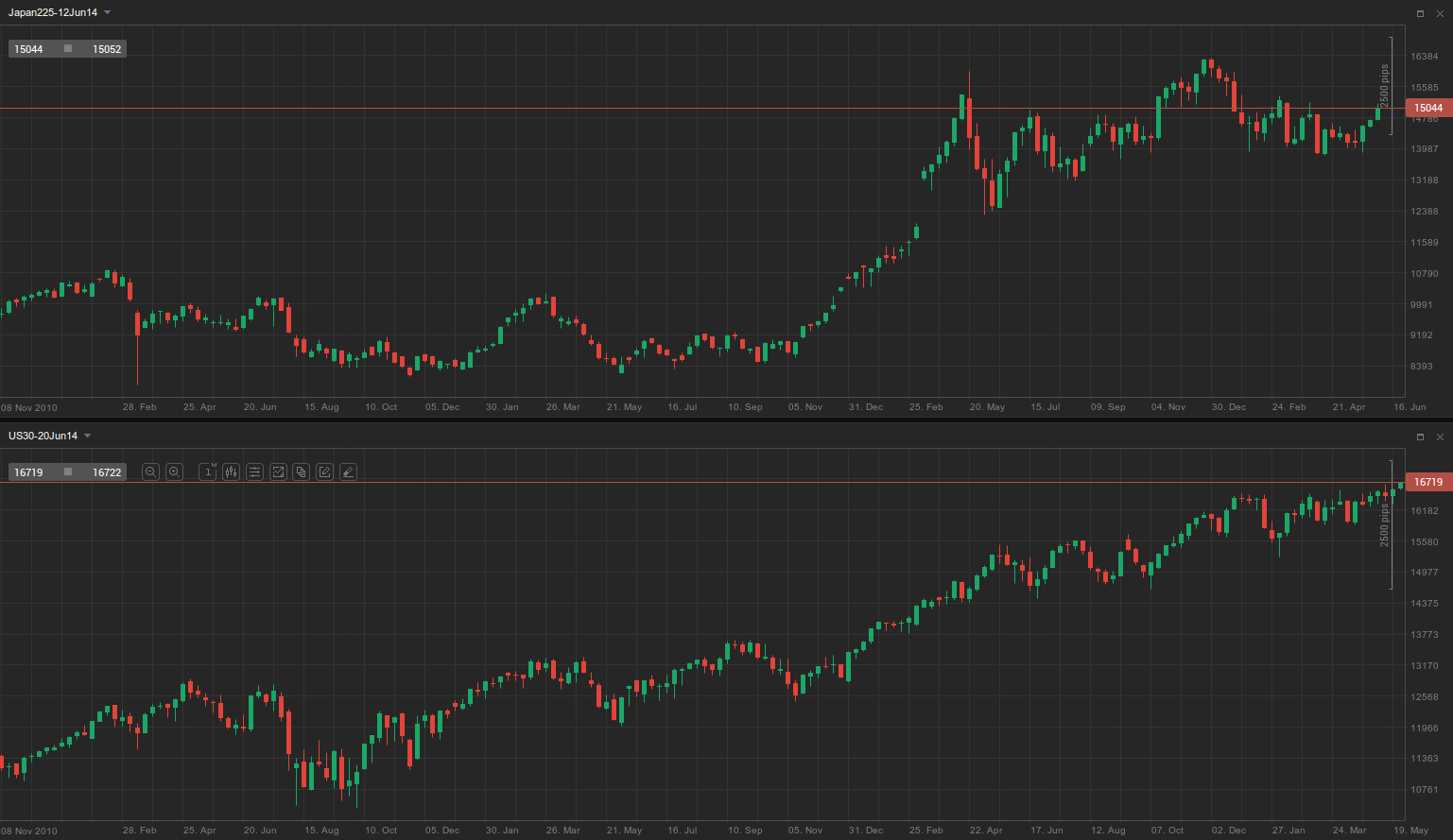 As you can see, although not all highs and lows within the last 3-1/2 years match, there is overall a very strong positive relation between the two indexes. You can also see that moves in the Japanese index are more volatile, whereas the Dow shows a more gradual advance, but in general the common bull trend is evident. Another detail worth taking into consideration is that on some occasions the Nikkei leads the Dow with a move, while other times the Dow rises or falls before its counterpart.

Generally, due to the globalization of modern economy, global stock market indexes are highly correlated, not just in the US and Japan. As each developed and emerging economy relies heavily on trade, major economic powers tend to push each others activity, as well as less developed nations, during times of economic prosperity. Conversely, as a major economy plunges into recession, like for example the US, reduced economic activity cuts demand for imports of services, manufactured goods and commodities from other countries, which in terms has a negative effect on their production and hurts economic activity, and so on.

Correlation between currencies and equity markets

Lets take a look at the correlation between the USD/JPY and the Dow. 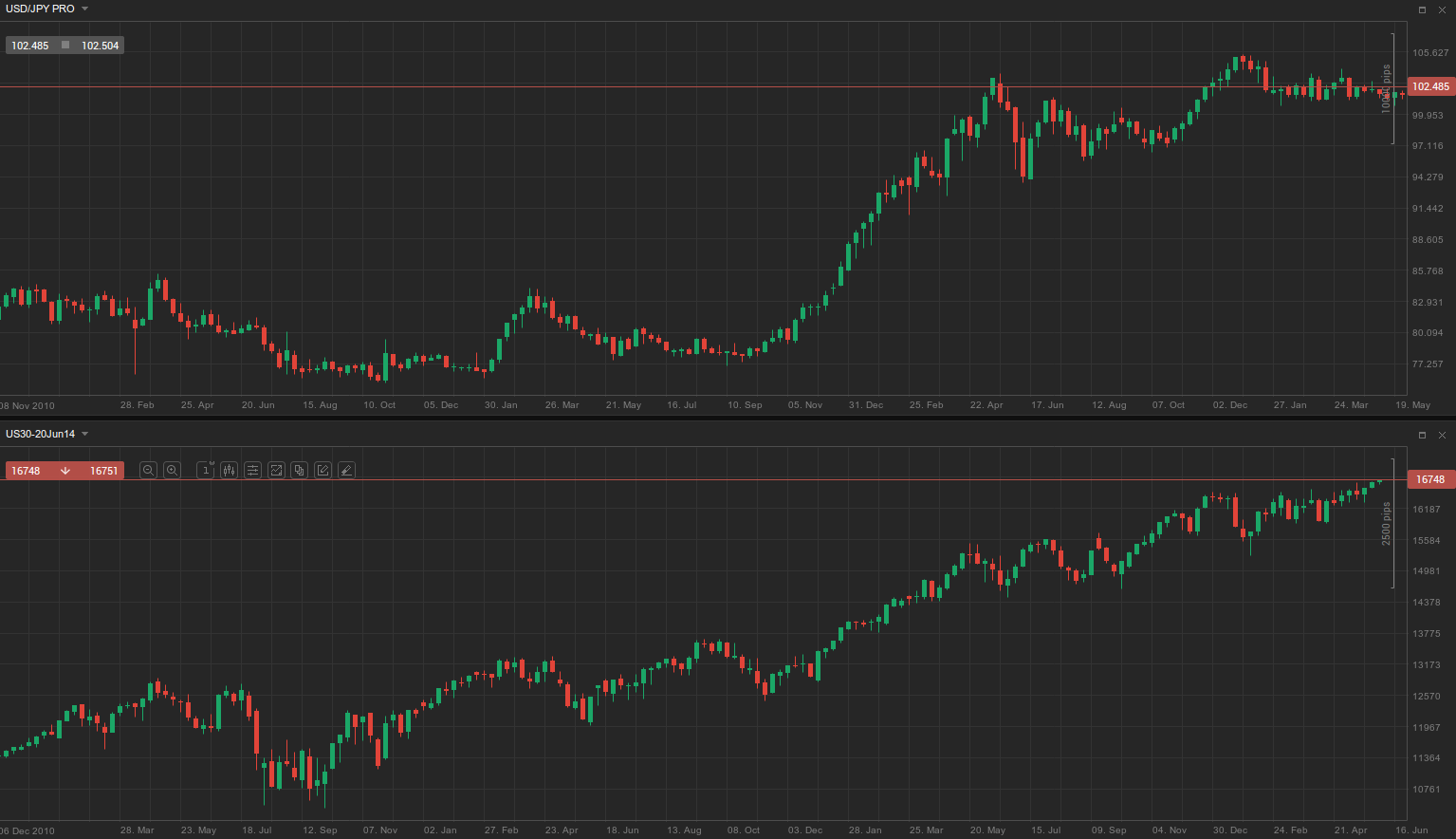 The situation is quite similar. Both the USD/JPY and the Dow Jones are trending up, with the index showing a more stable rate of ascension, while the currency pair is more volatile. In some cases the cross is leading a move in the index, while in others the Dow precedes a rise or fall in the USD/JPY.

Now, you might think that because the US dollar has an overall positive relation to the Dow should also mean that the yen and the Nikkei must have a positive relation too. Well, this is not the case and it stands to show why the equity-currency price movements connection is more complex and not just straightforward. On the screenshot below you can see a comparison between the USD/JPY cross and the Nikkei. 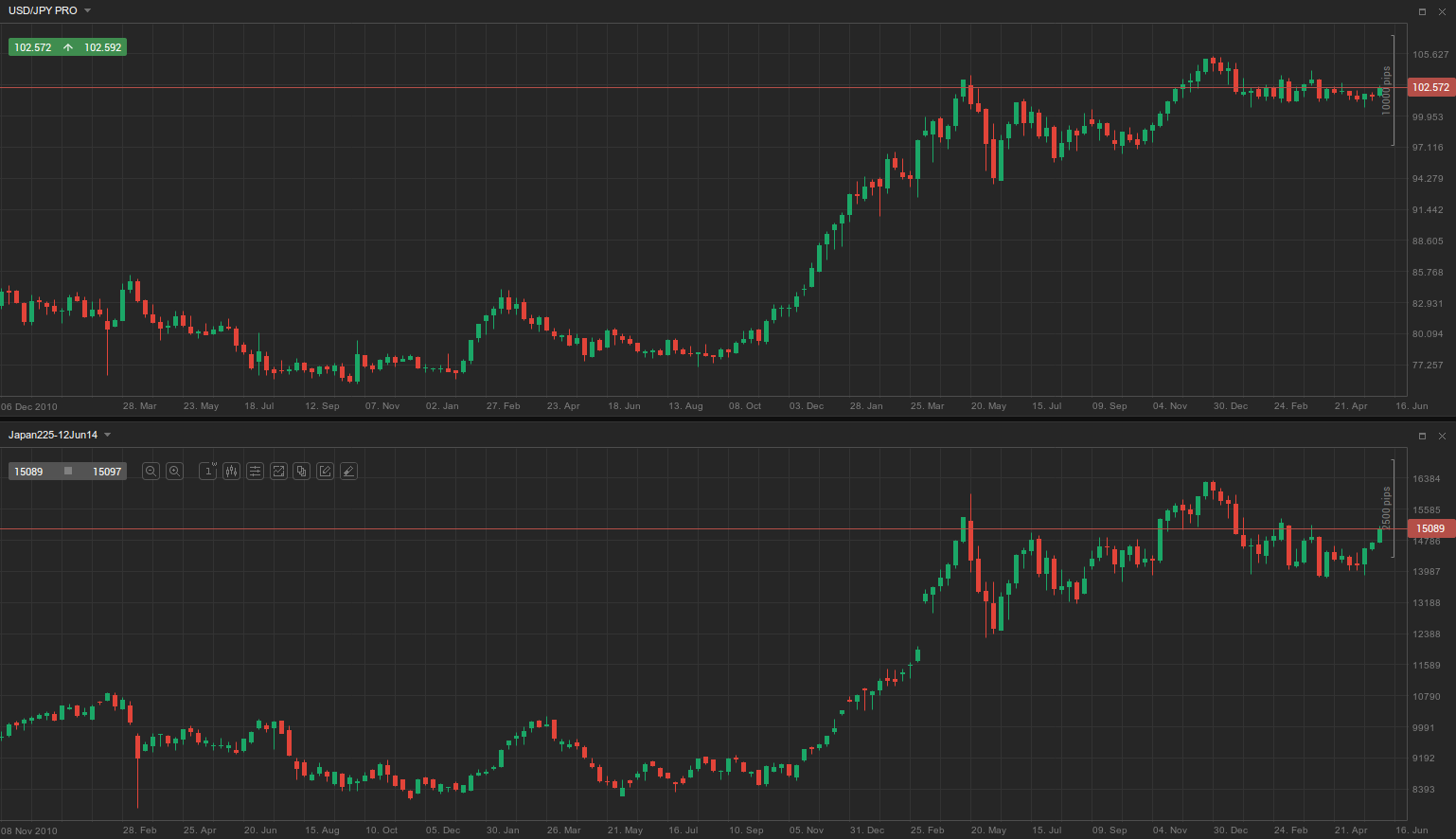 As you can see, the yen and the Nikkei have a very strong, but negative, correlation. Because the yen is seen as one of the safe-haven currencies, demand for it is strong during times of political and economical instability. Up to the end of 2012, the Nikkei remained in a trading range for the past two years, before rallying 50% since the beginning of 2013 through the middle of 2014. At the same time, the highly appreciated yen was putting a damper on exports and thus hurting economic activity.

However, with the reelection of Shinzō Abe as Prime Minister of Japan in December 2012 and his nomination of Haruhiko Kuroda, an advocate of looser monetary policy in Japan, as next Governor of the Bank of Japan, the yen was expected to be depreciated. The BoJ embarked to accelerate inflation to 2% on annual basis and announced in April 2013 it will expand its asset purchase program by $1.4 trillion in two years.

The yen began to depreciate shortly before the election of Mr. Abe and lost around 30% of its value relative to the US dollar within the next year and a half. At the same time, you can see a mirrored movement in the Nikkei as the weaker currency allowed Japanese companies to boost exports. Among them was Toyota Motor Corp, which managed to achieve a 90% surge in its net profit for the 2013/2014 financial year on the back of positive currency effects and record-high sales.

Thus, although in general currencies tend to have a positive relation to equities, some very distinct exceptions like the one described above underscore the importance of not basing your trading decisions primarily or solely on these correlations. Just like with bond spreads, which we discussed in the previous lesson, a wide range of additional factors are at play here, thus a multi-factor analysis is required. It would be helpful to use the currency-equity markets link as an additional component to your trading strategy, but not as its primary basis.