In the previous article we made a profile of the US dollar by compiling the most significant economic indicators and other events which play a role in its valuation. Now we will turn our attention toward a measure which gauges the greenbacks relative strength to its major trading counterparts – the US dollar index.

The US dollar index is a geometrically-averaged calculation of six currencies weighted against the U.S. dollar, namely the euro, the Japanese yen, the British pound, the Canadian dollar, the Swedish krona and the Swiss franc. After the end of the Bretton Woods fixed exchange rate system agreement in 1973, the greenback began to float freely against the other global currencies. This introduced the need for the Federal Reserve to create the US dollar index to provide an external bilateral trade-weighted average of the dollar.

The US dollar index started with a value of 100.000 and has since then ranged between 164.7200, touched in February 1985, and its all-time low of 70.698 which was hit on March 16, 2008. The reading is interpreted by comparing its current value and change of the dollars strength against its counterparts to its initial value. Thus, if the index is standing at 80.0000 in 2014, then the US dollar has lost ground against the basket of six currencies compared to its positions in 1973 (it has experienced a 20% loss in value).

We said that the index comprised six component currencies. There has been only one altering of the basket – when the euro was created and adopted as a national currency of several countries. Prior to that change, the US dollar index contained ten currencies – the five current ones, apart from the euro, plus the West German mark, the French franc, the Italian lira, the Dutch guilder, and the Belgium franc. The euro replaced the last five.

Logically, the currencies comprising the US dollar index have different weight in its calculation – the Swedish krona can hardly be equal to the euro. The different percentage weight is used in the indexs calculation formula. They are as follows:

It is not surprising that the euro has the biggest weight in the dollar index – the Eurozone currently consists of 18 countries and for many economists the euro has the status of the worlds second reserve currency. Meanwhile, Japan is the worlds fourth largest economy (fifth if you count the European Union).

The dollar index is calculated by Reuters in real time every 15 seconds based on the spot prices of the indexs underlying currencies. The price used for the calculation is the mid-point between the Reuters top of the book bid/offer in the component currencies. The real-time quote is then delivered to the Intercontinental Exchange and is then redistributed to other data suppliers.

Based on historical data, you can calculate yourself that there is a very strong negative correlation between the US dollar index and its underlying currencies, which can be used in different trading strategies. If you want to read more on intermarket correlations, check out our article “Correlations Within the Forex Market“.

Although some of the currencies have a distinctively lower correlation to the US dollar and may lead to some errors in trading, those with the highest negative correlation can have a fairly reliable application in trading. For example, knowing that the EUR/USD has a 94% negative correlation with the US dollar index, we might expect that when EUR/USD reaches a new low, the dollar index (USDX) should surge to a new high. Take a look at the following screenshot. 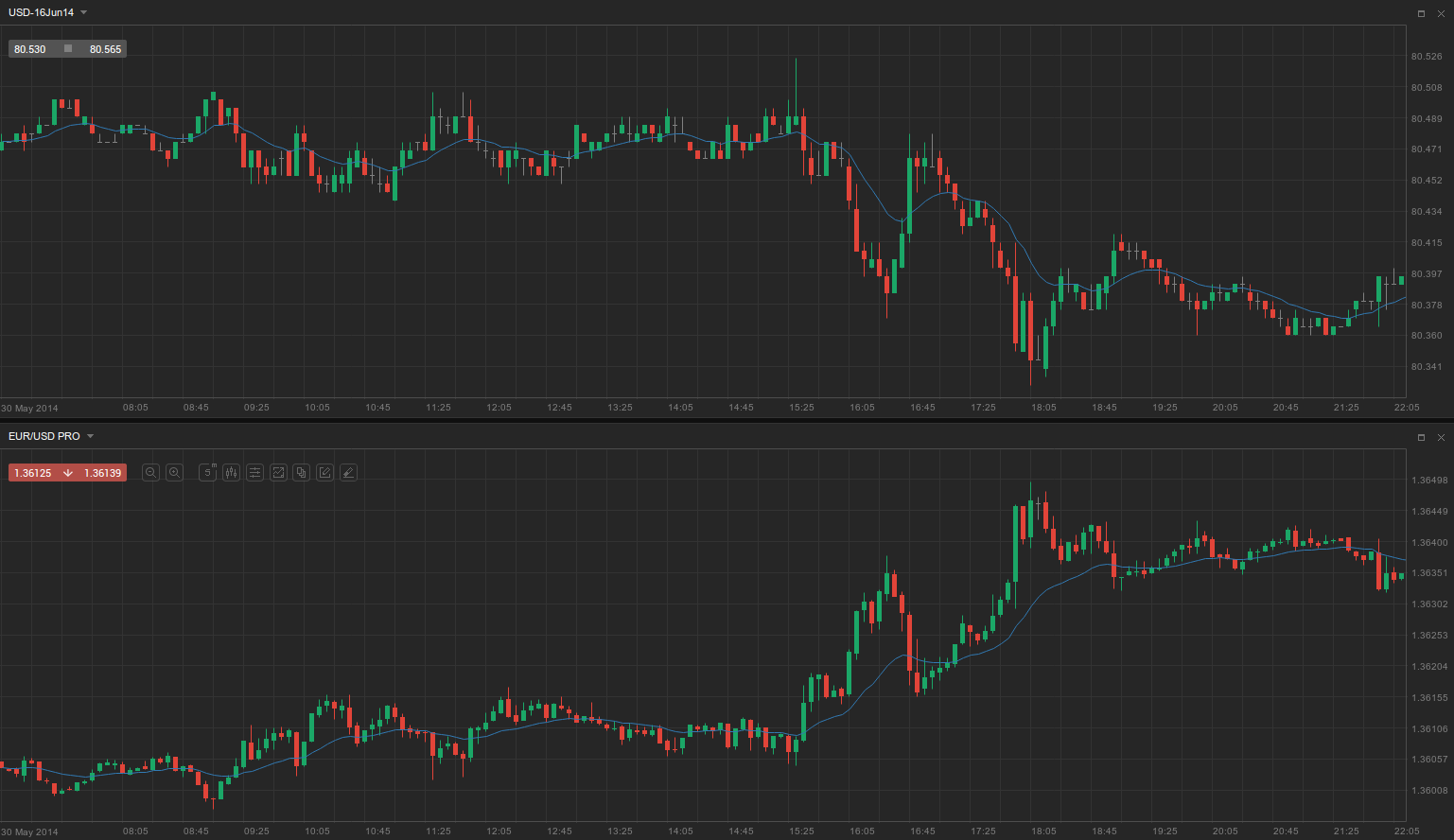 Thus very often when you see a currency strengthening against the dollar, like for example CHF/USD, but that appreciation is not supported by an overall weakness in the dollar (US dollar index), it is likely a sign not to go long on that currency in the long-term. As a measure of the dollars strength, a gain in the USDX should be coupled with a decline in the opposite currencies and vice versa. Discrepancies should be viewed and traded as divergences.

Apart from helping you find divergences, the dollar index might be traded in another, more standard, way. If, for example, you want to trade USD/CAD, but you are unsure of the US dollars relative strength against the Canadian dollar, thus you fear an entry might result in a loss or unsatisfying results, you can trade the overall strength of the dollar – via the index. Just like when a trader is not sure whether a companys stock will underperform or not, but overall the stock market is performing solidly, he will refer to purchasing an index. For example, if better-than-expected key economic data have been released from both the US and Canada, and both readings were better-than-expected, leaving you with ambivalent expectations for the USD/CAD direction, you can go long on the USDX, if the greenback is overall outperforming its major trading partners.

So far weve discussed only the first measurement of the exchange value of the dollar – the U.S. dollar index. However, there is a second measure, known as the Trade-Weighted Dollar Index (the Broad Index). It was introduced by the Federal Reserve as a response to the adoption of the euro by several European countries and to better reflect current US trade patterns.

The trade-weighted dollar index is similar to the US dollar index in that it is calculated as a weighted average of the value of a number of currencies relative to the US dollar. However, this measure is based on the export-import values of American goods and includes 26 currencies whose weights are based on the US trade activity with a particular country. When it was introduced, the countries included in the trade-weighted currencies accounted for over 90% of the total US imports and exports.

The weight of each currency here is reassessed much more frequently compared to the US dollar index that is traded on the ICE. According to some economists, the larger pool of underlying currencies makes this measurement of the US dollar value more accurate. Also worth taking into consideration is that the trade-weighted dollar index includes currencies of emerging economies, whose trade activity is bound to continue increasing at a considerable pace. Below you can see the up-to-date list of all currencies included in the index and their weight.

Broad Index of the Foreign Exchange Value of the Dollar