Hello there, this is tradingpedia.com and this video deals with a very popular subject – oil or the oil market. Oil is offered by all brokerage houses as nowadays from an FX trading account you can access various markets.

Basically, the brokerage account offers you the possibility to diversify the trading account, to benefit from various correlations, to benefit from hedging using partial or complete hedging, and so on.

This is not the oil price that you see here on the screen, but the USDCAD pair. It is here for a reason and you will see in a moment why.

The Price Of Oil

I’m not going into more details, but what is important is that the CAD is directly correlated to the price of oil. For instance, if the USDCAD declined from 1.46 to the current 1.3160, one of the main reasons is the higher price of oil. Usually that relationship decreases with higher levels of interest rates in the United States because some of the traders will choose the USD because of the higher yield.

But since March, with the coronavirus crisis, the Fed slashed the rates close to zero. Bank of Canada did the same and there is no interest rate differential anymore between the two. Therefore, the main driver between the two currencies is now the price of oil.

During the pandemic, this move higher from 1.35 to 1.46 was caused by the oil price falling into negative territory. Up until this 2020, we never knew that oil can settle on a future contract below zero. Well, it did. It was not sure if the clearinghouse would allow it, but it did. At that point in time, as it reached zero and below, oil producers paid for someone to come and pick the oil up as there was no storage room available. To shut down an oil rig or oil producing facility is quite a complicated process, it cannot be done just like that.

Also, still in the United States, focus on the oil rig counts. These are published also around the world. The bigger the number, the bigger the oil quantity that reaches the market and it may have two interpretations. First, it shows strong demand so companies invest in more oil rigs. Second, if this creates an imbalance between supply and demand, it may lead to lower prices. Therefore, make sure you understand how the oil rig count interpretation functions, as it is a major driver for the price of oil.

Last but not least, consider the OPEC. Born sixty years ago, the acronym stands for the Organization of Petroleum Exporting Countries. The aim is to control production in such a way to influence the price.

Because these countries’ main resource is oil, they and their population’s welfare depends on the price of oil. Therefore, they all want to see bigger oil prices, but how big is big enough? Because bigger oil prices translate into inflation in the developed world, and then it will not have the power to buy your oil. Therefore, there is another balance to consider for finding out the right price for oi. $-40 was definitely not the right price for oil, as it settled there for the month of April.

What the OPEC did was to meet and form an alliance with nine other oil producing countries, plus Russia, and they cut the production in such a way that the oil remains underground. This was made in time, and the price of oil recovered slowly but surely and we can see that recovery in the USDCAD decline.

The price of oil nowadays trades around $40 from -$40 so a move of more than $80 from negative to positive, mainly due to what OPEC did. So make sure you understand what OPEC stands for, when the meetings take place, and you will understand how the oil market functions.

A weekly release, the US crude oil inventories show the change in the number of barrels of oil held in inventory in the country. It is important to note that the data refers to the crude oil held by commercial firms.

For the currency traders, the release has a strong impact on the Canadian dollar. Because Canada is a big oil producer and most of its oil products are exported to the United States, the crude oil inventories fluctuation impacts the Canadian currency.

Here’s is how. If inventories in the United States are rising, it means that the economy is not expanding as fast as initially believed. Hence, fewer oil imports from Canada are needed, impacting the Canadian GDP and thus the Canadian dollar. The opposite is true when crude oil inventories decline. 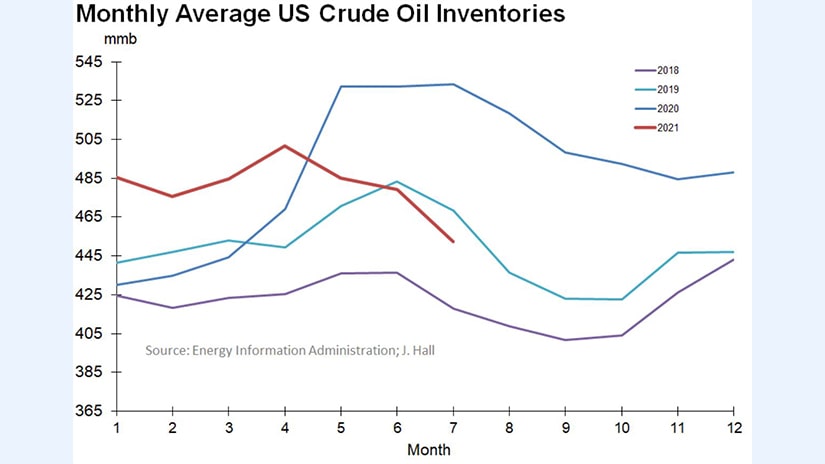 Another driver for the price of oil is the US oil imports. Despite the fact that the US oil production increased in the last years, the largest economy in the world still imports a lot of the needed oil.

The two main sources are Canada and the Organization of Petroleum Exporting Countries (OPEC). To better understand the impact, let us refer to the chart below. 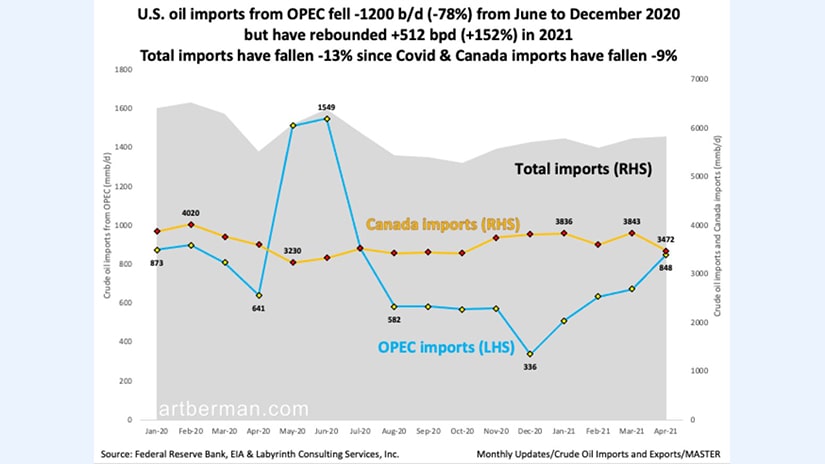 For the price of oil, the drop in imports means a decline in demand. The economic recession led to crude oil inventories rising, the imports falling, and the price of oil declining.

We also note that for the United States, the imports from Canada are a constant, while imports from OPEC fluctuate. The trader must know that there are various types of oil, depending on the region where it is extracted from.

There are over one-hundred-and-sixty types of crude oil traded in the market, and the most famous ones are the West Texas Intermediate (WTI), Brent Crude, OPEC Reference Basket, Dubai Crude, and so on. This is why the correct reference is to the prices of oil, because they trade at slightly different prices depending on their composition and costs of obtaining the derivative products.

OPEC meetings are a source of great volatility for the WTI crude oil price and the oil prices in general. Because OPEC is a cartel of oil-producing countries, it can control the production. Hence, by controlling the supply and demand levels, the cartel is effectively controlling the price.

The best example comes from the events in 2020 when the COVID-19 pandemic started. The demand for oil products collapsed, so the market remained flooded with oil.

Economies closed and the economic activity was halted in most countries around the world. The result was that the price of oil collapsed into negative territory and OPEC was forced to make adjustments to the production levels.

The problem is that the production cannot be shut down overnight. It takes time to adjust it.

After that, OPEC made sure that the supply was always below demand levels, and so the price of oil started to rise from its lows. It reached as high as $77 recently, after another OPEC meeting when the cartel failed to reach an agreement on supply.

On the announcement, the price exploded higher out of a symmetrical triangle but was rejected from resistance. It shows how big an impact the OPEC meetings and their decisions have on the price of oil. 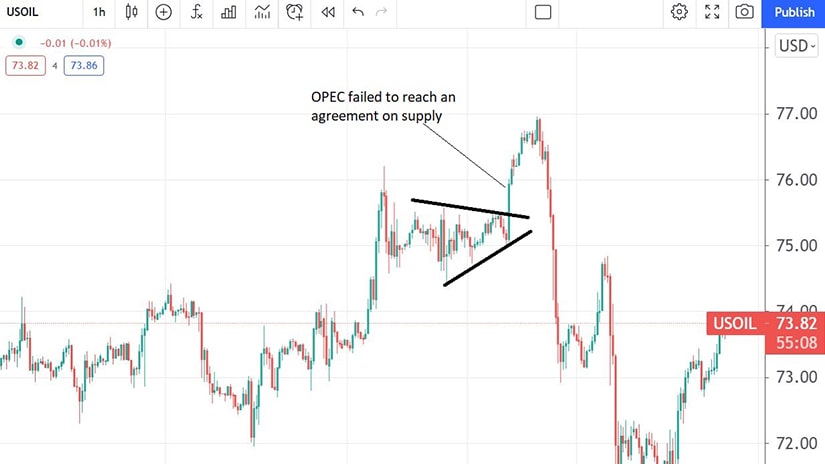 EIA Reports and Changes in Supply and Demand

Another source of volatility for the price of oil comes from the forecast of future supply and demand levels. The Energy Information Administration (EIA) in the United States is a great source for obtaining such forecasts.

Sharp changes in the supply and demand forecast may impact the current price of oil. As the chart above shows, the EIA forecasts that the Brent and WTI crude oil prices are expected to hold above $60 for the rest of the year and into 2022. 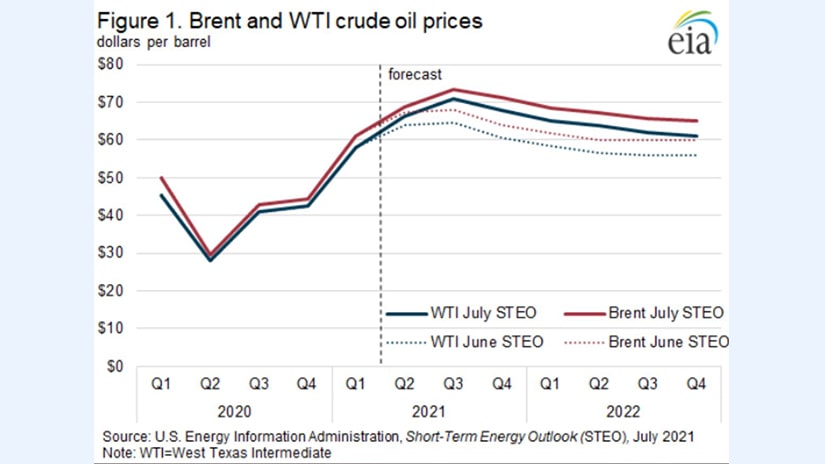 It doesn’t mean that they will, though. Remember, it is just a forecast. Other factors may change the supply and demand levels drastically.

For instance, since the new US administration won the last elections, it reverted most of the decisions taken by the Trump administration. As such, the US and world leaders are back at the negotiation tables with Iran on the nuclear deal.

Currently, the Iranian oil is not allowed on the market, due to sanctions against nuclear developments in the country. If the talks lead to a nuclear deal, the estimates are that at least two million of barrels of oil a day will reach the market.

Such a quantity is big enough to affect the supply in the market and to create volatility in the prices of oil. Because it is unknown what the outcome of the discussions will be, the OPEC cannot adjust the production levels quickly enough.

All in all, the price of oil is influenced mostly by the changes in supply and demand. Also, economic data that points to transition from one stage of the business cycle to another are important as well.