Hello there, this is tradingpedia.com and this video introduces some basic terminology to know when trading the currency market, but also when trading financial markets as traders and investors have used these terms for quite some time and it is unlikely that they will change anytime soon.

In the case of the FX market, the first thing to know is that all quotes have a bid and an ask price. In other words, if you believe that the EURGBP moves to the upside, you want to express that by buying. Buying only takes place from the ask price, selling from the bid price. The distance between the two is the spread, a fee paid to the brokerage house, for the services offered.

If you believe that the EURGBP moves to the upside, if you are bullish, you express that bullish view by buying from the ask price.

The term comes from the bull, the animal, as the bull has its horns pointing to the upside. If you search the Internet and you look for the Wall Street bull, this is the explanation, because the stock market is supposed to go to the upside.

If you believe that a currency pair will move to the downside, you would want to sell from the bid price, and by the time you close it you use the ask price and the broker will bank the spread. If you believe that the market moves to the downside, you have a bearish view on the pair, meaning that the EUR depreciates, and the GBP appreciates. The term comes from another animal, the bear, as it moves with its head pointing to the ground.

Any quotation on the FX dashboard has five digits, with the exception of the JPY pairs. When you measure the distance that the market travels, you should use pips or pip points. For instance, the EURUSD quote is 1.18099 – 18103. The five-digit quotation was recently introduced a few years ago, as technology improved and instead of a four-digit account now you can open a five-digit account for better execution and service from the broker. But a pip remained the fourth digit.

Another thing to consider is the nicknames that exist on the FX market. Not all currencies have ones, but some do. For instance, the GBPUSD is called cable. You may read or hear that “cable dropped 100 points due to Bank of England signaling more easing”. Cable refers to the GBPUSD pair, as the name comes from the first physical cable laid down at the bottom of the ocean to connect the two financial centers, London, and New York.

But central bankers are also active forces in the market, only that they cannot express a bullish or bearish view because they are not supposed to influence the exchange rates, they act as independent organizations. Therefore, when a central banker issues a statement, can only deliver a “hawkish” view. This is the equivalent of bullish, meaning it is positive for the currency. Or, it can deliver a “dovish” view, meaning the equivalent of being bearish.

In other words, a central bank will not hint at buying here and selling there, but it will hint that, for instance, monetary conditions favor a hawkish statement because inflation pushed higher in the United States and therefore the overall FOMC Statement is hawkish when compared with the previous one. Or, the Fed may deliver a dovish view, because unemployment is higher than expected. In other words, it only refers to the possible effects on the currency.

If you are bullish, you look for the currency to move to the upside, if the statement of a central bank is hawkish, that is positive for the currency. Hawkish and dovish names also come from two animals, the hawk in the sky and the dove, so it shows the same relationship, high and low, or up and down, that you can find overall in financial markets.

As mentioned earlier in the article, a pip point refers to the fourth digit in a market quote. Despite all Forex brokers offering five-digit quotations, traders should be aware that the fourth digit is the most important one.

Some exceptions do exist. For example, in the case of the JPY pairs, the second digit is one pip point.

The best way to illustrate the importance of a pip point is to consider an example. Here is the EURUSD five-minute timeframe that shows the recent price action. The EURUSD traded with a bearish tone the entire day, forming a triangular pattern that broke lower. 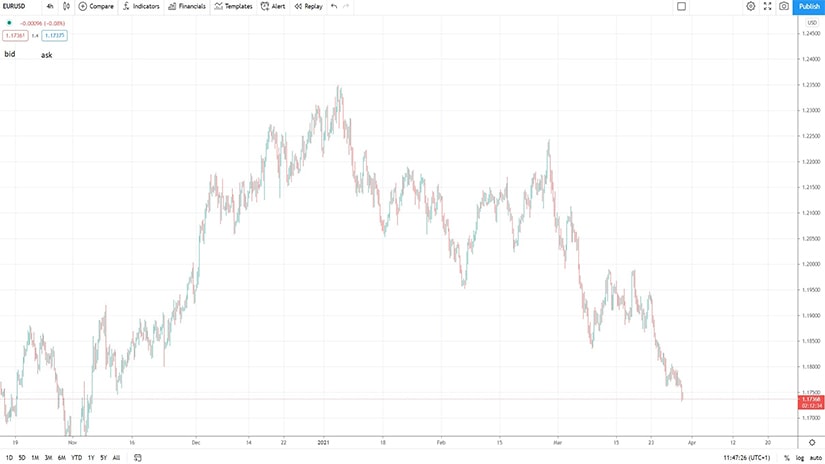 Traders wanting to make the most of the pattern have a technical setup to use. First, they measure the longest leg of the triangle and project its length from the breakout point. That is the target.

Second, traders must define the risk management elements – the actual market levels to use and the volume to trade. It all depends on the number of pips considered.

It is known that the apex of a contracting triangle (i.e., the point where its trendlines intersect) offers strong resistance and support for future price action. Therefore, a trader may want to sell short the EURUSD pair by the time the market reaches the apex (i.e., 1.1739).

However, the risk management analysis is done on a four-digit basis, not a five-digit one, so to better identify the pips points. The stop is usually set at the previous lower high, or 1.1743.

The difference between the entry and the stop level is four-pip points. That is the stop loss, and the value of each pip is influenced by the volume traded. For example, by trading 0.1 lots, each pip is worth $1, and thus the risk is $4.

Traders buy and sell financial assets based on their technical or fundamental analysis. However, not all traders refer to their actions in the market in the same way.

For instance, we already discussed the notion of bullish and bearish, and the way the two words are derived. A similar terminology is to go long and short.

In other words, a trader that buys the EURUSD is expressing a bullish view. After the buying, the trader has gone “long” the EURUSD. More precisely, the position in the market reflects a long EUR and short USD view. 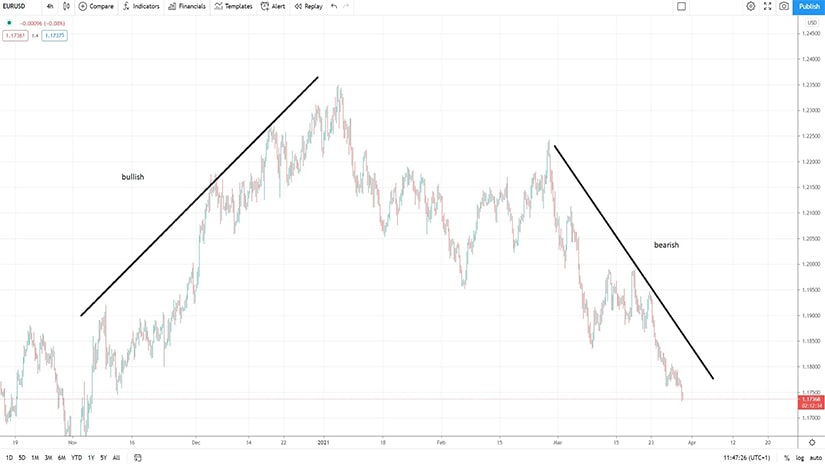 By shorting a currency pair, a trader is long one currency and short another one. If we use the same EURUSD pair to exemplify, going short, the EURUSD expresses a long USD position and a short EUR position. In other words, for the trade to be profitable, the EURUSD must decline, but the trader went short the pair but long the dollar.

All exchange rates in a Forex trading account have two prices – the bid and the ask. The two prices form the quotes that make the FX dashboard, and they are both used in a transaction.

No matter if you go long (i.e., buy) or short (i.e., sell), a currency pair, in the end, you must square the position to mark the gain or loss. To exemplify, let’s assume you go short or sell the EURUSD pair, based on the previous example on the five-minute chart.

If the EURUSD pair reaches the take-profit level at 1.1724, the broker will close the position according to the instructions. However, to close it, the broker uses the ask price, as opposed to the trader that used the bid price when sold the pair.

The combination of the two prices, mandatory in any transaction, is known as “squaring”. All positions must eventually be squared, and the lower the spread between the bid-ask prices, the better for the trading account. 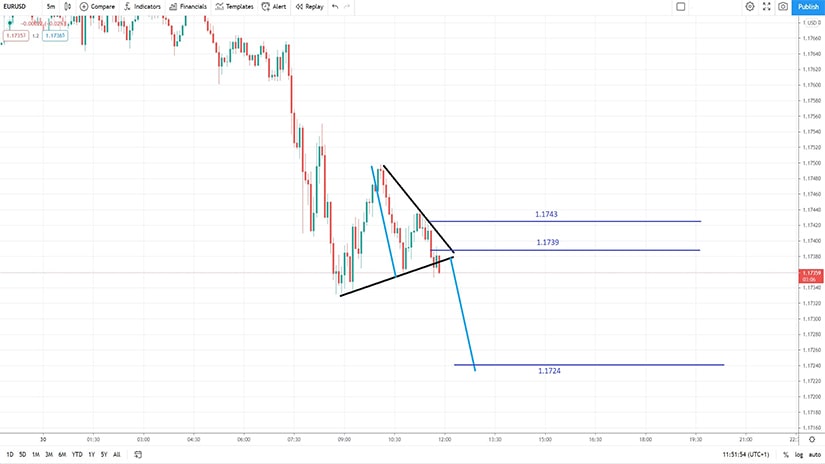 Traders often hear about trends. When the market is trending, it means that it moves. In sharp contrast, ranging or consolidating markets hold their levels.

In a bearish trend, the opposite happens. The market keeps forming new lows, while any pullback is not strong enough to break the previous lower high.
Lower lows and higher highs, therefore, reflect trending conditions.

Leverage is a term that refers to the ability of borrowing funds from the broker for trading purposes. The higher the leverage, the less margin blocked in a trading account for any given trade.

Also, the higher the leverage, the bigger the risk. Because higher leverage means less margin blocked as collateral by the broker, the risk is that the trader receives a margin call and has nothing left in the trading account when it happens.

In strong regulated jurisdictions, such as the European Union, brokerage houses cannot offer a leverage bigger than 1:30. The rule is made for traders’ protection and serves at identifying traders that are not regulated to offer services in the European Union countries.

Traders should be familiar with the concept of a margin call. It means that the broker will automatically close the open position in a trading account if the funds are insufficient to maintain them and the trader does not come up with additional funds.

Coming back to leverage, there is a thin line between trading on margin and leverage. The higher the leverage, the less funds will remain in the trading account after a margin call is triggered. Hence, the bigger the risk for the trader.

Most U.S. stock market trading is on margin as well, only that the process is slightly different. For example, when buying stocks on margin, traders put the initial margin requirement, and then they borrow the rest from the broker. For the amount borrowed, they pay interest, which is an additional cost to the trade.