Hello there, this is tradingpedia.com and this video deals with basic money management rules in trading. It does not refer only to the currency market, but to be applied on anything that you might trade – currencies, gold, CFDs, etc.

Any trade requires a proper risk-reward ratio, also called rr ratio. A proper ratio is 1:2, namely if your risk is $2, you must make minimum $2 on that trade for it to make sense. To put it in a different perspective, every successful trade gives you two chances to fail and still not lose money. The higher the rr ratio the better. In order to use a proper rr ratio, any trade must have a stop loss and take profit order.

Many traders ignore the stop loss, preferring a mental stop instead. This is wrong because human nature leads to traders avoiding the stop. Why would you do that? If the market reverses to the stop it means that the trade idea was wrong. So let the stop loss order do what it is supposed to do – to stop the loss.

How to build up a risk-reward ratio? The EURUSD here formed a triangle that broke higher in March with the pandemic. This was a triangular, called a non-limiting triangle in terms of Elliott Waves.

It is usual that after the breakout the market comes and retests the trendline. This would be a nice place to go on the long side. If we go long here on the EURUSD, we need a stop loss. What would be the level to invalidate the position?

Determining Where to Set Your Stop-Loss

The stop loss would be the lowest point in the last leg of the triangle. If we use a trendline and mark the level and this would be the entry place, then this is the risk for the trade. We need than the reward equaling more than twice the risk and project it twice to the upside and that would be our target.

For the trade to make sense, going long here requires remaining on the long trade all the way to here. However, there is a catch. This is the daily chart and such a distance is quite big. For instance, the entry is 1.09 and stop 1.0772, so 120 something pip points. Depending on the volume traded, each pips may have a different value. For example, 0.1 lots on the EURUSD equals $1. But if your trading account is only $100, that means 10% of the trading account, which is not good.

Set Yourself a Maximum Loss Threshold

This is how to convert the percentage or the risk of a trade into the actual volume to trade and that is the strategy explained. Why is important to risk only 1% of the account on any given trade? If you end up having more than 72 consecutive losing trades, it only means a 50% drawdown in the trading account. If this happens 72 times in a raw, maybe trading is not the thing to look after. So this is very important because it protects capital, because it gives you the chance to fail without affecting the trading account too much.

These simple money management principles can be used on all trades and setup. As long as you know your stops and entries, you can convert the position to find out the size of the trade and control how much it will affect the trading account if things go wrong.

Another risk-management strategy often used by currency traders and investors in other markets is hedging. Multiple types of hedging strategies exist – full hedging, partial hedging. However, not every trading accounts and jurisdictions allow it.

For this reason, the MetaTrader4 trading platform is not used by U.S. traders because the brokerage houses cannot offer it. Instead, brokers can offer the MetaTrader5 platform, one that does not allow full hedging.

Yet, the MetaTrader5 platform does permit partial hedging or hedging using correlated assets. For example, on a long EURUSD trade, the trader may hedge the account partially by selling the AUDUSD pair.

The trick with hedging is that there is the risk of traders taking more losses than usual. Hedging does protect a trading account, enforcing better money management, but the strategy is viewed as risky.

As such, in some parts of the world is not allowed, although it represents a cornerstone to advanced money management. Also, another trick is to hedge the account to such an extent that the account still has room to grow.

One of the things many traders ignore is the time available to trade. The problem is that everyone involved in financial markets wishes to become a professional trader – to trade for a living. However, before such a step, one should just start to trade.

Because of the day-to-job time and other chores, the time available to trade shrinks considerably. We should also mention here that the quality of any analysis, technical or fundamental, decreases if the trader is not in front of the screens and uses the smartphone’s app to buy or sell an asset.

Put it simply, time is money, in the sense that lack of time to trade costs money. A trader should have access to the trading platform’s resources, to the news, and be available when the market is moving – that is, during important economic events.

Most relevant economic events in the markets take place during the working day. From morning to evening, there is always something happening in the world.

From the ECB meeting and press conference, to the Bank of England’s decision, the unemployment rate in the United States, and so on. The trader must be available during such events, as otherwise, the lack of time costs money and, thus, the initial money management plan suffers.

How to Build a Proper Risk Reward Ratio – An Example

Risk-reward ratios solve for the lack of time available to trade. More precisely, risk-reward ratios, together with pending orders, are pillars of a sound money management system.

Yes, trading is based on technical analysis, but it may also reflect a fundamental belief. Take the EURUSD setup below, meant to explain the benefit of using a risk-reward ratio.

The concept of a risk-reward ratio is derived from the fact that no trader in the world has only successful trades. Also, a successful trade (i.e., on that shows a profit), is not necessarily the best possible trade under certain conditions.

The rule of thumb says that a risk-reward ratio must exceed 1:2. It means that for the risk taken, the take-profit must exceed twice that risk.
Put it simply, for every $1 invested; the trader expects to make $2. Therefore, if the trader goes short the EURUSD and risks $50 but books the profit after $20 – is this good or bad?

In the short run, it is good – a profit is a profit. But in the long run, this is detrimental to the trading account.
When a losing trade comes, the chances are that the trader will let the loss reaching the stop and does not cut the loss earlier. This comes from human nature, something that all traders struggle with.

The chart below shows the recent EURUSD price action on the 4h chart. We see that after a decline from the 1.2350 highs registered in January this year, the market corrected in a three-wave structure.

Whenever this is the case, traders focus on a retracement to the 61.8% level, or the golden ratio. The idea is that selling the three-wave correction and placing a stop at the highs will bear fruits in a bearish impulsive wave structure. 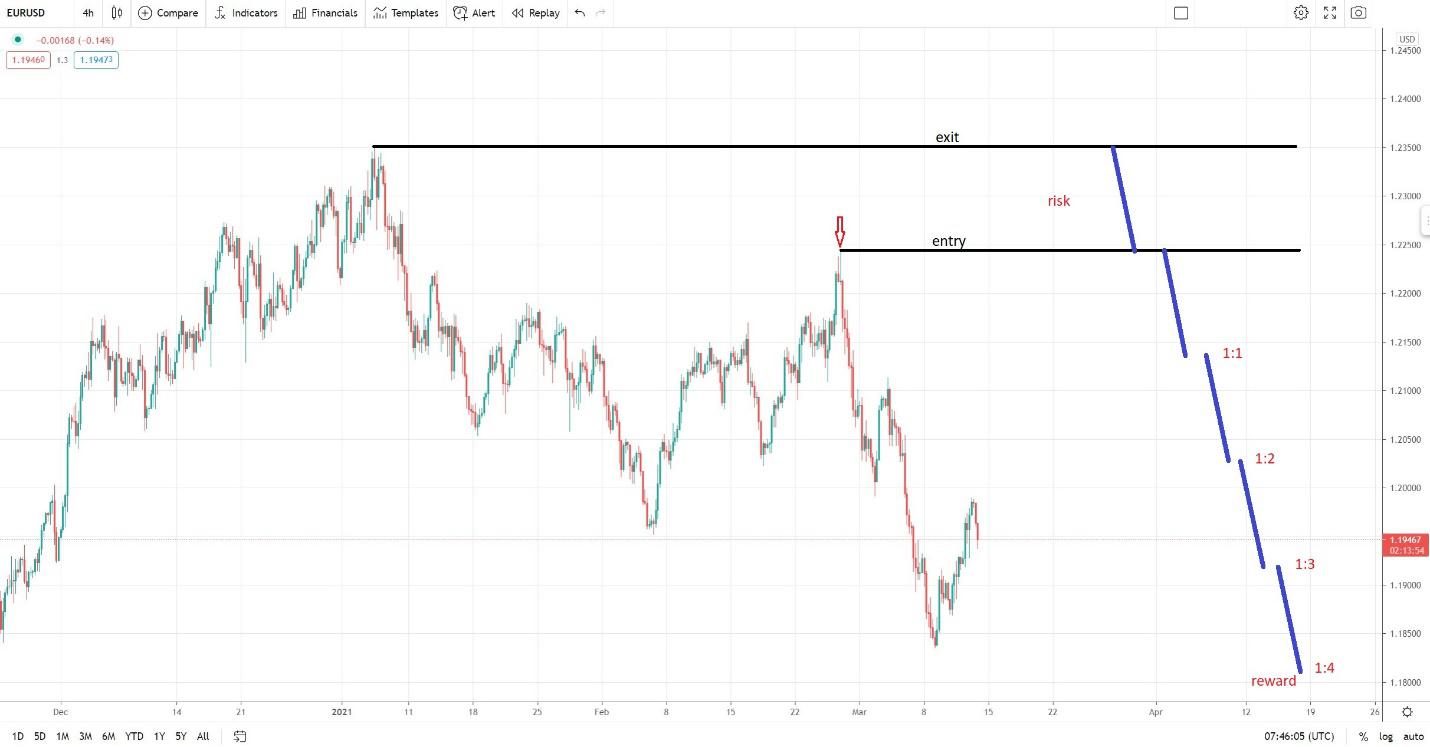 First, short-sellers measure the risk – that is, the move from the entry place to the stop-loss order or the invalidation level. Second, they project the risk in the direction of the trade, as many times as possible.

The minimum, remember, is two times, for an r:r ratio of 1:2. The bigger the ratio, the better, because a 1:2 r:r ratio suggests that the trader will break even if it wins one trade but losses two.

Can Risk Be Eliminated?

No. But it can be reduced significantly by using proper risk-reward ratios on EVERY trade. Assume the EURUSD trade from above, closed by the time the market reaches 1:2. The next trade should use an adjusted volume so that the dollar risk does not exceed 1% or 2% of the trading account. Yet, the reward should be at least double, two or four percent.

To sum up, traders cannot eliminate risk altogether, but they can mitigate it better by using sound money management rules. Sticking to the plan is often the most difficult part of a money management system, but it all comes down to practice and execution.