For instance, the EURUSD at 1.1901 here shows how much one dollar is worth in terms of EUR, or the other way around. To understand how an exchange rate moves, we must understand what moves a currency and monetary policy is the right thing to interpret.

Monetary policy is set by central banks. Imagine that this is the world with the U.S. here, Europe, Australia, Japan, etc. Each region or country has one currency. The G10 currencies are the most important ones in the sense that when they move against the world’s reserve currency, the USD, then you will see a shift in the monetary policy.

Monetary policy refers to each central bank (e.g. Federal Reserve of the United States, ECB in the EURUSD) having a mandate, price stability, which refers to the 2% inflation level. For example, the ECB has a mandate to keep inflation below but close to 2%. Why 2% and not zero?

The lower inflation goes, the easier the monetary policy becomes. Depending on the crisis and the economic impact, how to economy reacts and how the business cycle evolves, the central bank will do more.

The 2008 and 2009 Great Financial Crisis brought innovations to monetary policy. The Fed introduced a new tool called quantitative easing. The Fed bought bonds issued by the U.S. government with the intention of creating digital money and that is easing, in an attempt to debase the currency as inflation was non-existence. To create inflation, the Fed started the QE program.

QE was tested in Japan as well, and the size was bigger than the one in the U.S. After that experiment, the economy in the U.S. recovered, the inflation picked-up, and the EURUSD, for instance, reacted. The Fed raised rates from 0 to over 2%, and the EURUSD declined because the interest rates in the euro area were mostly negative. The ECB sets three interest rates and one of them, the deposit facility, was still below zero and the other ones, for example the marginal lending facility was barely above zero.

Besides interest rates, central banks also use unconventional monetary policy tools, like the QE, or TLTROs in Europe (cheap loans for companies to take and they will repay them at very low rates) and other decisions to affect the value of money.

The sum of monetary policy decisions in various parts of the world is responsible for the FX dashboard’s volatility. For example, during this pandemic, the Fed eased the policy just like other central banks, like the ECB. So why did the EURUSD moved to the upside? The answer comes from the fiscal stimulus, as the one in the U.S. outpaced anything seen in the world, so the USD declined significantly as the difference in the easing in various parts of the world favors a lower USD.

As a consequence, the EURUSD is at highs, GBPUSD recovered to 1.31 from below 1.20, AUDUSD did the same, etc., only because monetary and fiscal policy packages point to more easing in the United States.

Central banks monitor the economic evolution over a certain period and adjust the monetary policy accordingly. Most central banks meet every six weeks to decide on the level of interest rates, but some meet more often than others.

For example, the Fed in the United States and the ECB in the Euro area meet every six weeks. However, the Reserve Bank of Australia (RBA) meets every month.

Each central bank has a research team and economic staff that deliver the recent economic data, trends, and forecasts. Armed with the info, the central banks then decide on the appropriate monetary policy decisions.

Traders should be aware that monetary policy is not only about interest rates. Sure, changes in interest rates are what matters the most, but the central banks rarely take the market by surprise.

More precisely, central banks like to communicate well in advance their decisions. Therefore, at the actual release of their statements, most of the info is already priced in.

As mentioned earlier, central banks’ members monitor key economic data before making a decision – just like traders do. They interpret the trends and have a dovish or hawkish opinion.

If more hawks dominate, the policy is bullish for the currency. The opposite happens if doves overcome hawks.

An economy able to create jobs is a healthy one. Hence, monitoring the jobs data gives a clue about the direction of an economy. It may expand or contract, and that is bullish, respectively bearish for the currency.

Inflation data is typically released monthly, and for most central banks, the core data is more relevant. Core means that the data excludes volatile prices such as transportation, energy, food.

A PMI is calculated for all economies and represents a benchmark for comparing sectors and economies around the world. This is a survey, and the outcome is released in the form of an absolute number. Traders compare the outcome with the fifty level – anything above shows an economic sector that expands, while a PMI release below fifty shows a sector that contracts.

Every other measure taken by central banks belongs to unconventional monetary policy measures. Forward guidance is one example.

Central banks use forward guidance to “guide” market participants’ expectations about future interest rates. The clearer the message, the more likely it is that the market will not be surprised by future decisions. Another example is quantitative easing, the phenomenon where central banks buy their own government bonds.

Also, TLTROs or Targeted Long Term Refinancing Operations are other examples of such measures. Via these loans, the ECB gave access to commercial banks to cheap money to stimulate economic growth.

The best way to illustrate the effect of monetary policy on markets is to use an example. Here is the EURUSD’s recent price action and the historical data from 2021.

It is obvious that the EURUSD pair is in a downtrend since the new trading year started. On March 11th, a Thursday, the ECB delivered its interest rate decision and held the usual press conference. 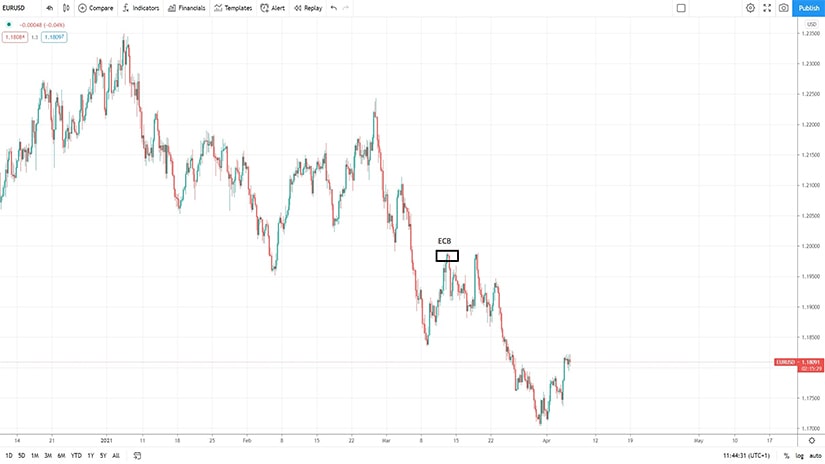 Traders found out that the central bank plans to significantly increase the purchases under its bond-buying program. The message was dovish, so the EURUSD pair declined shortly after the ECB press conference ended. It fell over two hundred pips to a 1.1700 low.

An exchange rate reflects the value of one currency in terms of another. Therefore, a pair like the EURUSD does not move only based on the ECB decisions but also on the Fed’s decision.

After the ECB decision, the Fed was expected to deliver its view on the economy and to adjust the monetary policy. 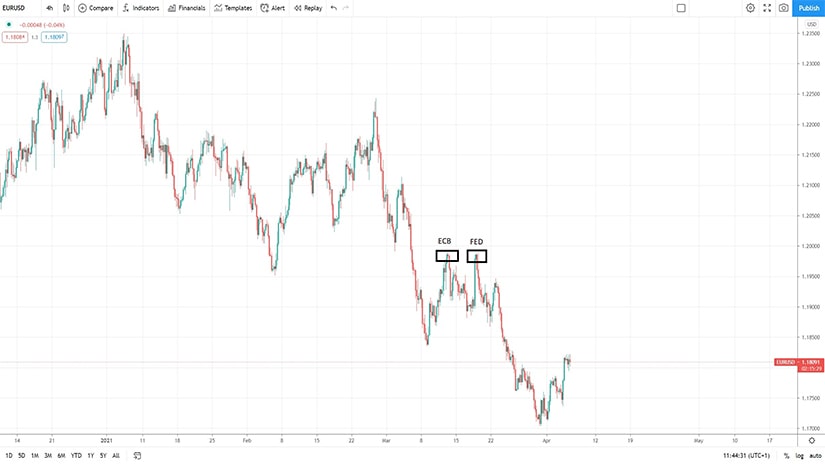 On March 30th, the Fed issued its statement and held the press conference shortly after. As it turned out, the Fed was hawkish because it was not concerned by the rising yields, and so investors started buying dollars.

Therefore, both central bank decisions in March 2021 were bearish for the EURUSD pair – the ECB was dovish while the Fed was slightly hawkish. Hence, the monetary policy influenced the EURUSD exchange rate as traders sold it according to the new information received from the Fed.

Sometimes central banks get it right; sometimes they don’t. For example, one of the biggest monetary policy errors in recent history is the rate hike delivered by the ECB during the Great Financial Crisis. Therefore, traders must always use their own judgment when interpreting central banks’ decisions.