This is the EURUSD showing the current price action on the 4h chart and it struggles at 1.19. It is in a rising trend in quite some time, as for the last four or five trading days it only moved to the upside. During these days, the price action had certain characteristics in various trading sessions.

The trading week is also important, not only the trading day, as the trading week starts with the Asian session. If we are to see a gap on the FX market, we will see it on a Monday, providing there is not some earthshattering event happening.

It is important to understand the concept of the Sunday candlestick. While it has nothing to do with the characteristics of the London or North American session, it is a candlestick that starts the trading in Asia. For a couple of hours you will see price changing hands, for example this small candlestick shows the first transactions during early Asia.

Every time the price action lacks activity in early Asia. The spreads between the bid and ask prices increase. There is little or no liquidity. If normally spreads on crosses like the GBPCHF two pips or so, in early Asia the spreads exceed even ten or twenty pips, depending on the broker you are trading week and the liquidity provider that the broker works with.

The slow Asian session is characterized by tight ranges and you may use oscillators to trade cross pairs. A cross pairs is one currency pair that does not have the USD in its componence and one way to make the most of the Asian session is to use oscillators on the small timeframes, like the five-minute chart for instance on a cross pair, and use the RSI. The Asian session was from here to here, and during this time the swings show a tight range and you can use manual scalping or even auto-trading if you have an Expert Advisor to trade with.

During the Asian session there is poor liquidity, the major pairs rarely travel and scalping on the cross pairs is the most suitable.

During the London sessions you have important central banks, like the ECB, BOE, SNB, etc. They announce interest rate decisions, or you have economic data out of the region that influences the market activity. London remains the most important financial center in the world, despite the fact that the City of London had capital outflows after the Brexit vote.

And then starts the North American session, which has an overlapping period with the London session. For a few hours, trading activity takes place in London and New York and this period is the most important ones especially on the fixing time. Each trading day has a fixing time, and after it passes, liquidity drains slowly but surely, and the price action begins correlating closely with the U.S. stock market because the main actors do not participate anymore.

Some exceptions exist when the FOMC Statement every six weeks, when all market participants stay late into the North American session, as that is the time when the market moves as the USD is still the world’s reserve currency.

One of the biggest mistakes rookie traders make is to trade constantly. Because the markets are open 24/5, they feel the need to do something, to take action. However, this is the recipe for failure.

Ranges predominate the price action, and the most important economic events are due in different trading sessions. Even on trending markets, the price action takes a pause at some points in time.

Moreover, some specific moments during the trading week or month are less or more active than others. Therefore, a trader should be familiar with all the particularities of a trading week and month, as well as with the characteristics of each trading session.

The NFP Week – Mind the Ranges Until Friday

Perhaps the most important trading week of any month, the NFP week’s price action depends on the release on Friday. As a reminder for those not familiar with this aspect, the NFP or the Non-Farm Payrolls data out of the United States is released every first Friday of the month.

Because trading algorithms are programmed to buy or sell in an instant based on how the actual data differs from the forecast, the FX market’s volatility rises at extreme levels. Therefore, all the price action during the NFP week centers on Friday’s data.

As such, the different trading sessions (Asian, London, New York) of a regular trading day have specific characteristics during the NFP week. First, the Asian sessions until that Friday are rangebound. Second, trends rarely form on the USD pairs during the London and North American sessions.

The best example comes from the EURUSD – on a typical NFP week, the EURUSD pair remains mostly flat if one compares the weekly opening and closing levels.

Using Momentum During the Asian Sessions

If we compare the three trading sessions, the Asian session is the quietest one. Even during strong trends, the price action typically pauses before making a new low or high.

Take the EURUSD recent price action seen on the five-minute timeframe. The market literally remained flat during the Asian hours and finally broke by the time early London traders came in.

However, on the bigger timeframes, the EURUSD was in a bearish trend, dropping from 1.1950 to 1.1850 a day earlier. Hence, the consolidation in the Asian session was just that – a consolidation.

Because ranges are expected, many traders use oscillators such as the Relative Strength Index. A better one for this purpose is the Momentum oscillator, as its divergences suggest the future movement once the London trading session begins.

As such, we see below that the price action and the Momentum oscillator diverged just before the end of the Asian session. By the time the London trading session started, the market already took the Asian lows.

Speaking of that, it is typical for the market to take the Asian session’s highs or lows right at the opening of the London session. That is particularly true in the case of the major USD pairs, like the EURUSD and the GBPUSD. 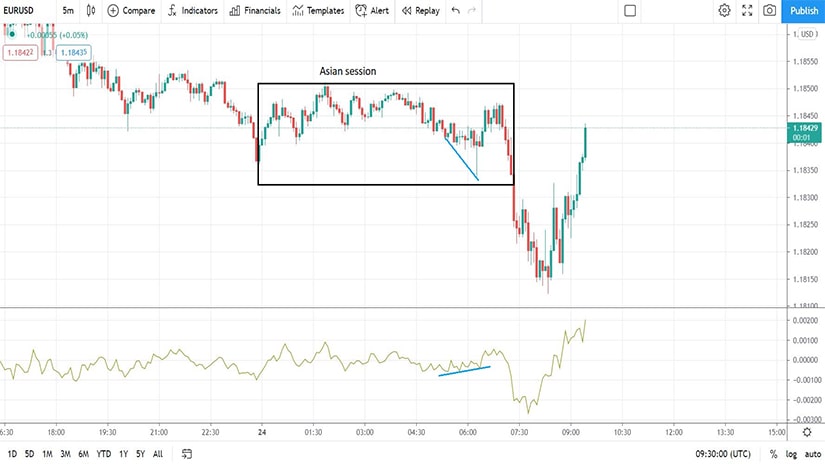 If a five-minute timeframe helps during the Asian session, the London session requires a different perspective. It is this session that has the largest volatility among the three trading sessions, so a bigger timeframe helps to interpret the markets.

Here is the EURJPY recent price action on the hourly chart. We see the pair reversing from the 130 – unsurprisingly, as it formed multiple reversal patterns above the round number (e.g., rising wedge, divergences with the RSI, etc.). 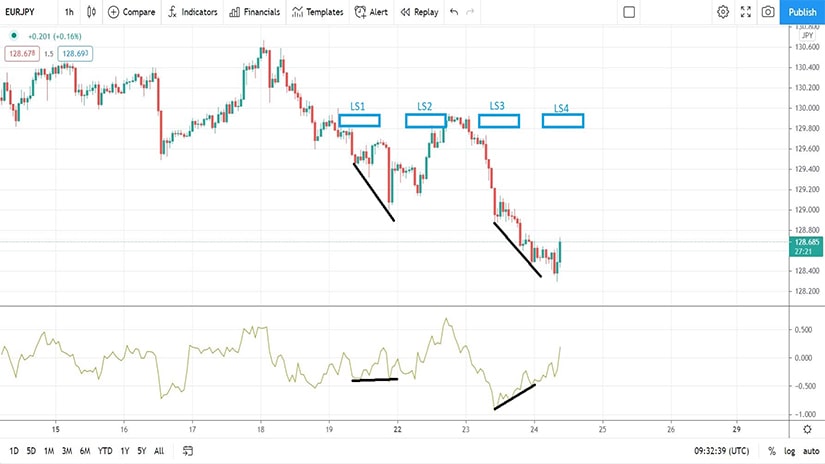 With the market in a clear bearish downtrend, it forms lower lows and lower highs. The blue boxes on the chart above represent the London trading session on the last three days and the current day. We see the market diverging from Momentum toward the end of two of the London session. What followed the next day was a pullback, enough to warn a trader about the price action to follow.

Obviously, this is not a rule, as there is no such thing as the perfect trading setup. However, by interpreting the previous London session, one may form an educated guess about what the upcoming session will bring.

The U.S. equity market is the largest in the world. Every corporation in the world that wants access to public money pursues its way to be listed on the U.S. stock market.

Naturally, all other stock market indices follow what the Dow Jones, the Nasdaq100, or the S&P500 do. Therefore, traders of all types and sorts must always have an eye on the U.S. equities.

Higher equities usually lead to a higher USD. Also, a bullish trend on the equities market may be responsible for a risk-on environment that drags other markets into the mix, such as gold and oil.

Fundamental traders may want to keep an eye on everything that comes out of the North American session. Think of Fed members’ speeches, testimonies, economic data, etc.

Technical traders often use a stock market index like the Nasdaq100 below and focus on possible reversal or continuation patterns. It does not mean that an FX trader will buy or sell the index, but she will use the analysis to trade correlated markets. 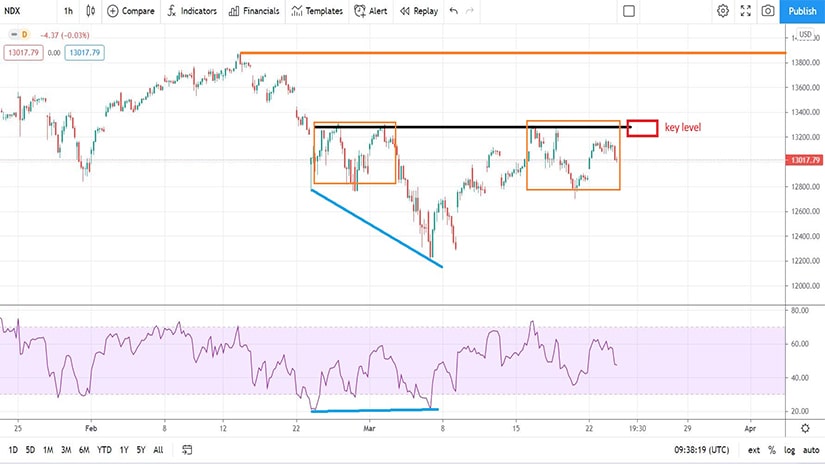 Finally, the fixing times are responsible for sharp increases in volatility. Several fixing times exist, with the most important ones coming at the end of the trading week and month.

As such, the London fixing time, somewhere around 16:00 GMT, is more important on Fridays than Mondays. Also, its importance increases if Friday is the end of the month as well.

When the two most important trading sessions overlap, as it is the case with the London and the North American session, the market activity increases exponentially. As such, if there is a time during the trading day when reversals are possible, these are the times.