Hello there, this is tradingpedia.com and this video shows what are impulsive waves and what to consider when trading impulsive waves. We already introduced the concept of the Elliott Waves Theory and what it stands for. Back in 1930s, Ralph Elliott developed a theory and according to it, the market moves in cycles, or waves, as the name suggests.

An impulsive wave has a five-wave structure: 1-2-3-4-5. Let’s try to label the structure with numbers. This is the first wave, the second wave, the third, the fourth, and the fifth.

Out of these five segments, three are impulsive: the 1st, the 3rd, and the 5th. One of the first things to consider when interpreting an impulsive wave is that the 3rd wave cannot be the shortest.

If you will have a third wave, for example, like this, and the 5th like this, this is not possible because the 3rd is the shortest. However, it cannot be the shortest when compared with other impulsive waves in the structure.

Any impulsive wave must have an extension. Therefore, look for the extended wave. The minimum distance for the market to extend is 161.8% when compared to the next longest wave.

All we have to do is to check the length of the 1st and 5th waves, calculate 161.8% of the longest one, by using a Fibonacci Retracement or Expansion tool, and then compare the third wave with it. If the 3rd wave exceeds the 161.8% level, you have an extension. If the 3rd wave does not exceed 161.8%, the entire pattern is not an impulsive wave.

An impulsive wave does not channel. This move here, at the bottom right, channels very well. That is a characteristic of corrective, not impulsive waves.

Well, the 1st wave is more than 161.8% of the 3rd wave. Even in such a case, the 3rd cannot be the shortest when compared with the length of the 1st or the 5th. All the rules are respected. How do we check for the extension?

This time, we measure the 3rd wave, we take 161.8% out of it and project that outcome over the 1st wave. If the 1st wave is longer than 161.8% of the third wave, then you have the extended wave. If not, that is not an impulsive wave.

The last possibility is that the market forms a 5th wave extension when the 5th is the longest and the 3rd is not the shortest.

One more thing on impulsive waves – actually two things. Overlapping between the corrective waves is not possible. You should focus on the 2nd and 4th waves. If the price action on the 4th wave comes into the territory of the second wave, that means overlapping – not allowed in an impulsive wave.

I still want to show you a possible 5th wave extension. It looks like this – 1, 2, the third wave like this, the fourth wave is not overlapping, and then the 5th wave extends in such a way that the market will not channel.

Remember – no channeling is possible with impulsive waves.

Is possible for this move on the GBPUSD to be an impulsive wave? This can be the 1st wave, this the 2nd wave, here is the 3rd, the 4th here, and then the 5th wave here. Normally we should check the extended wave if we do have an extension. We take a Fibo tool, find the 161.8% level and project it on the 1st wave.

Is this more than 161.8%? I would say yes. Therefore, an impulsive wave applies here. There is no overlapping, and the 2nd and 4th waves alternate. The 2nd wave takes more time than the 4th wave, the 2nd wave is more complex than the 4th one, so the principle of alternation is also respected.

The Elliott Waves Theory is all about impulsive and corrective waves. That’s it; this is what the analysis should focus on.

But the problem is that counting waves according to the Elliott theory is more complex than it appears at first glance. The basic assumption is that the market moves in waves – impulsive and corrective. 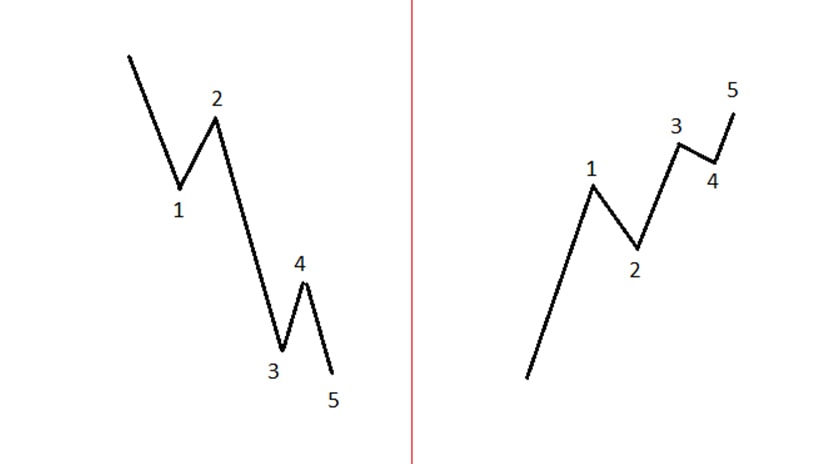 First, all impulsive waves are labeled with numbers. Because the structure has five segments, or waves, the labeling is 1-2-3-4-5.
Second, all impulsive waves need an extension. Effectively, it means that one of the segments must extend. Extension means that at least one wave must exceed 161.8% of the next longest wave. Once again, Fibonacci ratios establish the rules in the Elliott Waves Theory.

Finally, the third wave must never be the shortest in the pattern.

All of the above are just a few of the rules that an impulsive structure must follow. Others exist too, such as the principle of alternation, the overlapping rule, or the equality rule, and they are covered in other topics part of this section of our website.

Starting from left to right, can we count a five-wave structure? 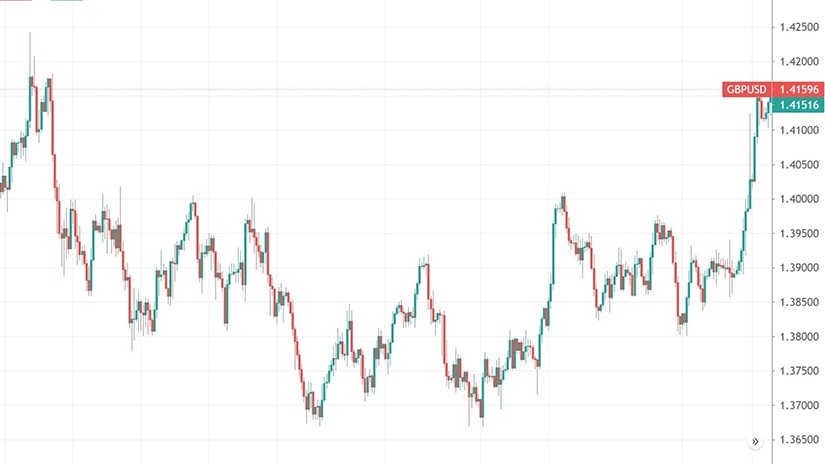 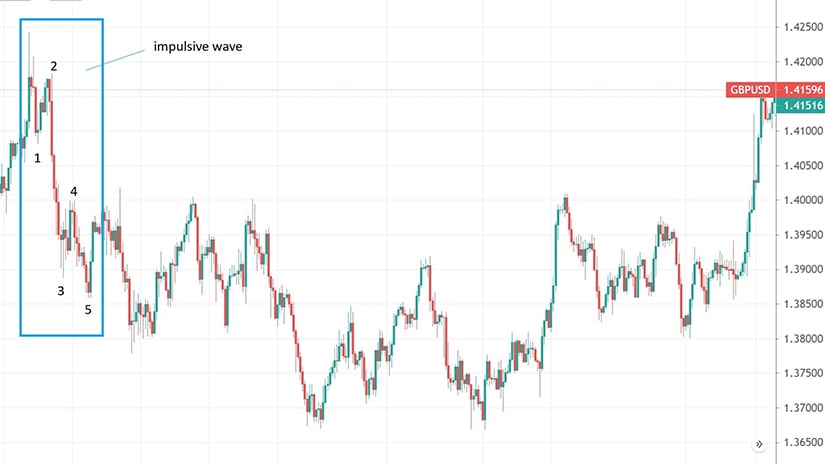 The next example is a fifth wave extension impulsive wave. Also, it forms on the same chart – the GBPUSD 4h timeframe.

A close look at the count below reveals that all the rules of an impulsive move are respected. First, the third wave is not the shortest in the structure. Second, the fifth wave is longer than 161.8% when compared to the third wave (i.e., the next longest wave). Third, there is no overlapping between the correcting waves.

Overlapping refers to the corrective segments part of an impulsive structure. That is, the second and the fourth waves.

Also, overlapping considers the entire market move after the corrective waves started. It means that no parts of the second wave should enter the fourth wave’s territory.

The simplest way to check this out is to mark the highest and the lowest levels in both ways, and make sure there is no interference between the two areas. This way, the overlapping is avoided.

How about the principle of alternation? According to it, the corrective waves part of an impulsive structure (i.e., the second and the fourth waves) should be different. 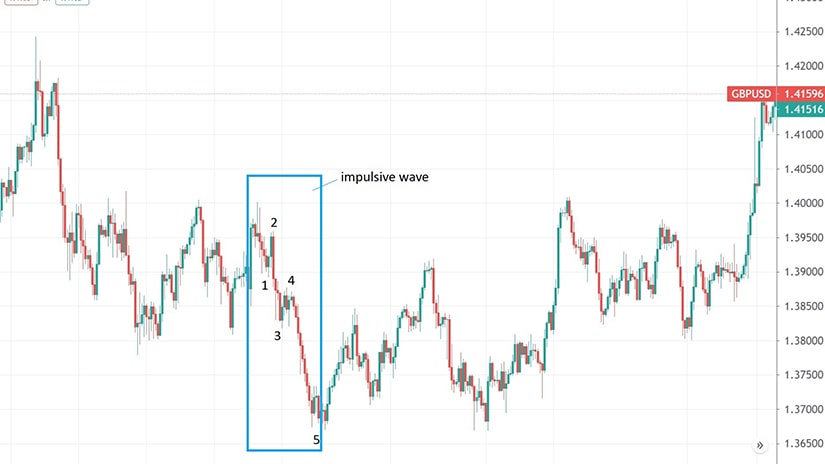 Judging by the structure, it is very easy to interpret it as an impulsive wave. However, there is one trick, already explained earlier – overlapping. 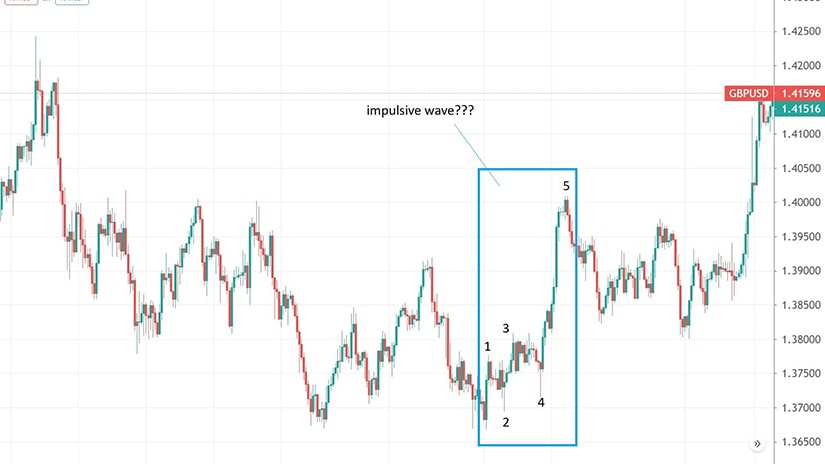 Summing up, impulsive waves have five segments, labeled with numbers. In a classic impulsive wave, only the first, the third, and the fifth ones are impulsive. The other two are corrective.

Also, in a terminal impulsive wave, all segments are corrective, despite being labeled with numbers. More about that in a future video here on tradingpedia.com.