Hello there, this is tradingpedia.com and this video introduces the Elliott Waves Theory to you. It is one of the most wonderful and powerful trading theories ever invented. It was introduced for the first time in the 1930s by a guy named Ralph Elliott, in the United States.

This guy was an accountant and had nothing to do with the stock market. At one point in time he fell ill, and he was forced to stay in house. He studied the stock market and noticed that some patterns came and went consistently. He put the patterns together and developed a theory known today as the Elliott Waves Theory.

Before anything, it is worth mentioning that the theory was developed on the stock market, but its principles were expanded to any market that moves, like this one here. This is the EURUSD and any market can be subject to Elliott Waves analysis.

This is a vast theory, one of the most complex ever created. It is impossible to be presented in only one video, and this is the reason why this video introduces the concept to you and what Elliott wanted to say and prove almost a century ago.

This is called a cycle with the Elliott Waves Theory and Ralph Elliott identified many cycles – grand cycles, super cycles, minuets, and so on. Different cycles of different degrees and each cycle looks like this. It is formed out of an impulsive move, or a five-wave structure, labeled with numbers – 1,2,3,4,5. So this move to the upside is impulsive, labeled with numbers, and we can put it like this – 1-2-3-4-5.

This 3rd wave here in red is also made out of five-wave structures, and so on. Out of these five waves, the 2nd and the 4th waves are called corrective waves. They are labeled with letters, instead of numbers, and are also called threes as most of them have a three-wave structure or an a-b-c.

A triangle is also a corrective wave, labeled with letters – a-b-c-d-e, but it is also called a three only to illustrate the corrective character of those segments.

What is important to know at this point with this introductory video is that, more or less, this is a cycle with the Elliott Waves Theory, and such a structure may be, for instance, the first wave in an impulsive wave of a bigger degree. Imagine here a first wave, let’s make it a bit bigger and of a different degree; this may be the second wave.

The beauty of the theory is that it allows you to forecast a future market move while keeping a tight money management control. You will always know where the market goes if you do your homework correctly. However, it has some drawdowns.

One of the major drawdowns is that counting waves with the Elliott Waves Theory is time consuming, it requires a top/down analysis from the yearly and monthly charts to the daily and four-hour charts, constantly updating the price action and that takes time.

This introductory video, remember that a cycle with the Elliott Waves Theory is formed out of an impulsive wave, five-wave structure, and a corrective wave, a three-wave structure. Multiple cycles of various degree exist.

What Is an Elliott Wave Cycle

The Elliott Waves Theory was first built on the stock market in the 1930s. Ralph Elliott believed that the market forms certain patterns, that keep repeating.

An assumption of the Elliott Waves Theory is that various cycles of different degrees exist. In other words, the market’s behavior on shorter timeframes is similar with the one seen on larger timeframes. The only difference between the two is the Elliott Wave cycle.

The Elliott theory is not the only one that uses assumptions. In fact, technical analysis as a field is based on assumptions, such as the fact that patters keep repeating themselves.

Modern economics tells us that the market is getting more and more close to efficiency. As such, a weak-form efficient market should not allow for abnormal gains based on technical analysis. However, the currency market is too complex for inefficiencies to be completely eliminated. Therefore, if there is a market where the Elliott Waves Theory has a chance of providing solid results in the twenty-fist century, that is the currency market.

What Makes an Elliott Cycle?

A cycle is a combination of one impulsive and one corrective wave. It is very important for the Elliott Wave trader to be able to distinguish between different cycles. 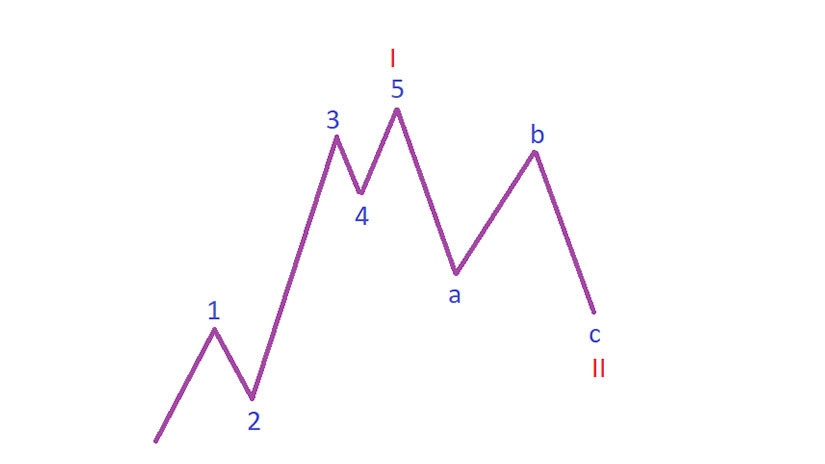 However, it could have been that the five-wave structure ended the fifth wave of an impulsive structure of a larger degree, and that is where the cycle ends. Therefore, whatever follows after that, belongs to a different cycle.

Elliott identified various cycles, from super cycles to minuette ones. The key is to correctly identify them and to use a top/down approach so not to get lost in interpreting the market moves. 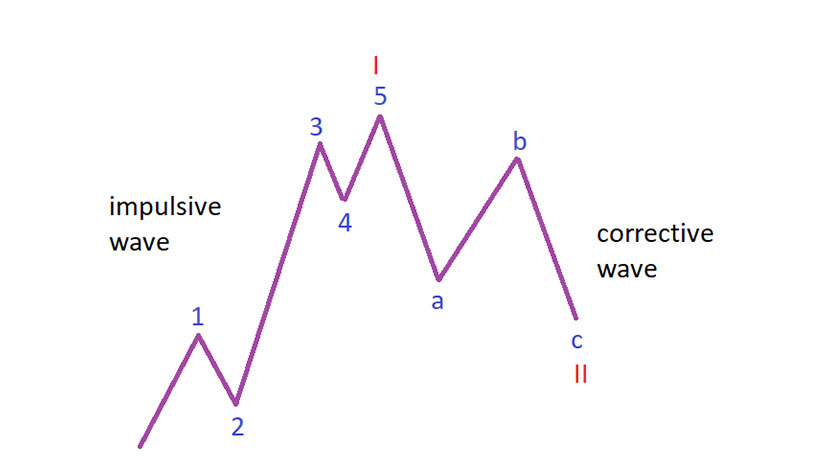 We can say the same about corrective waves. In the image above, the a-b-c structure, shown in blue, represents the corrective phase of the cycle.

However, wave c is always impulsive, while wave a may be impulsive or corrective, depending on the correction’s structure. The conclusion here is that impulsive and corrective waves are interconnected and a trader cannot interpret one without knowledge of the other.

The Elliott Waves Theory is built on Fibonacci ratios. If there is one thing that connects the different pieces of the Elliott puzzle, that is Fibonacci.

Both retracements and expansions are used to set strict rules. In fact, most of the Elliott rules are based on Fibonacci ratios. 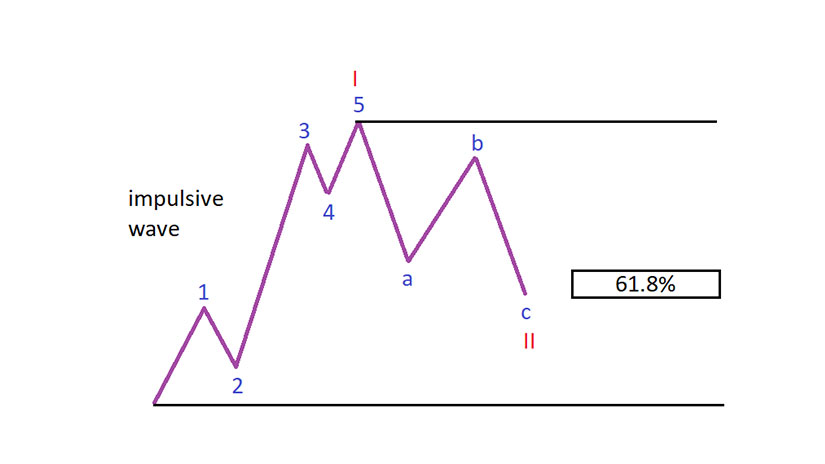 Armed with such information, traders have a setup at hands that often results in impressive risk-reward ratios. To exemplify, imagine that the bullish trader waits for the market to retrace 61.8% after an impulsive wave ended.

There is no need to wait and trade the move manually – a pending buy limit order may be set, and when the market declines and reaches the entry, the order is executed. This way, emotions are eliminated.

On such an entry, the trader will set the stop-loss order at the impulsive wave’s starting point. One of the strict rules in the Elliott Waves Theory tells us that the market cannot retrace beyond the start of the first wave in the impulsive structure. Hence, such a move would invalidate the scenario.

Next, traders use another Fibonacci tool, this time the expansion tool, to find out the 161.8% projection of the first wave. Finally, they use that projection as the target for the long trade. This way, the Fibonacci ratios helped building a risk-reward ratio much bigger than 1:2, the standard in FX trading.

But a top/down analysis is not mandatory to start from the monthly timeframe. Only because this is the largest timeframe offered by the broker, it does not meant that previous data does not exist.

Therefore, traders must do some due diligence and invest some efforts in finding out as much historical data on a currency pair as possible. This is valid for every market, regardless what you’re trading – having access to all the data, or to as much data as possible, is key when using the Elliott Waves Theory as the basis of your analysis.

A top/down approach also means that the trader starts with the bigger cycle and continues on the shorter timeframes from where it left. This way, the trader analyzes the entire market, knowing where the market should go and what market move will invalidate the Elliott count.

This is just an introduction to the Elliott Waves Theory, as more articles will follow. The Elliott theory may look as an easy one, but a complete analysis requires many pieces of puzzles perfectly combined to predict the next market move.