Hello there, this is tradingpedia.com, and this video deals with the Non-Farm Payrolls release or the NFP. This is, if not the most important, one of the most important pieces of economic data coming out of the United States – the world’s largest economy, having the world’s reserve currency.

How Does NFP Affect the Market

It means that this piece of information, the NFP, matters for the entire investing community, and the NFP is released every first Friday of the month. Sometimes when there is a holiday the NFP is delayed for the next week or comes out a bit earlier, but normally it is the first Friday.

For instance, this is the NFP price action on the August 7th – the date when the NFP for the month of July it was made public. During the NFP release there is a special price action on the USD pairs, in the sense that the entire NFP week is different.

On a Wednesday, you have the ADP payrolls, or the private payrolls. These are the jobs created in the private sector in the United States. While there is not a direct correlation between the NFP and ADP, there is still some clues about what the NFP might do.

Also, during the NFP week, the economic calendar has at least one ISM release coming out that week. ISM stands for the Institute for Supply Management and calculates the two PMIs in the United States – manufacturing and non-manufacturing.

Then you have the initial and continuing claims one day before the NFP, on Thursday. These are pieces of information from the labor market, coming out weekly, revealing the number of people that apply for unemployment benefits in the previous week. The higher the number, the worse for the currency.

Traders already have an idea about the NFP. So why do the markets react so strong when the NFP comes out? The answer comes from trading algorithms, as mentioned earlier, and the Fed’s mandate.

Unlike other central banks in the world, that have a mandate that revolves around the 2% level, the Fed has a dual mandate – it moves the federal funds rate based on two aspects: inflation (i.e. price stability) and job creation. So the Fed needs to balance the data from the inflation front and the jobs market front in such a way to set the federal funds rate, that affects the value of the currency.

So during the NFP, up until the Friday’s release, there is uncertainty. Something like what happened this August happens most of the times. This is the NFP week, and then we had the opening on Monday, when the EURUSD made a new low and recovered. Then Tuesday it attempted at the lows and then recovered, more or less hovering around the price action of the previous week. The EURUSD continued to the upside on Wednesday when the ADP came out. On Thursday it made a new high and retraced here and then came the NFP. Most of the price action on Friday happened after the NFP release. Until the NFP, during the London session, there was little or no price activity and with the NFP day the EURUSD retraced the gains of the week and closed the week where it closed the previous one. Therefore, the NFP holds the key not only for the actual NFP week, but also for what follows after that.

To trade the NFP, think of positioning for a period beyond the NFP horizon. Using scalping trading strategies during the NFP is tricky because slippage may affect the execution of a trade.

The NFP is very important because it affects the Fed’s mandate of job creation; it comes out on every Friday of each month; during the same week, two days earlier, the ADP offers a clue about what the NFP may show; focus on the employment component of the ISM releases; focus on the initial and continuing claims; keep in mind the expectations of the implications for the Fed – higher NFP is positive for the currency because the expectations are that the Fed will grow hawkish.

The NFP Report – High Volatility Ahead

Every first Friday of the trading month, the NFP report for the previous month shows the number of jobs created by the US economy. This is one of the most volatile financial markets reports as it has implications for all asset classes – equities, bonds, FX, and so on.

Despite plenty of data that suggest the possible outcome on the NFP day, the market’s volatility is relatively subdued until the release on Friday. However, once the NFP report is made public by the Bureau of Labor Statistics, the volatility increases exponentially.
The reason for the rapid increase in volatility comes from the high-frequency trading algorithms. These algorithms are robots that automatically execute orders based on the instructions programmed.

We talk about milliseconds here as this is the time needed for robots to execute trades. Therefore, very often, the market reacts extremely fast, and huge distances are traveled almost instantly.

Tight Ranges During the NFP Week

Another consequence of trading algorithms influencing the market is the tight ranges seen during the NFP week. While not a rule of thumb, the market ranges are extremely tight, especially on the US dollar pairs.

Because the US dollar is the world’s reserve currency and is the dominant currency on the Forex dashboard, tight ranges for the dollar means tight ranges for the entire market.
Have a look at the EURUSD price action prior to the May 2021 NFP report. The horizontal area shows the level where the market opened on Monday and where the market was less than two days ahead of the release.

Basically, the EURUSD pair sat in a tight range, hovering above and below the opening level. Such price action is typical for the EURUSD pair and other pairs having the dollar in their componence. 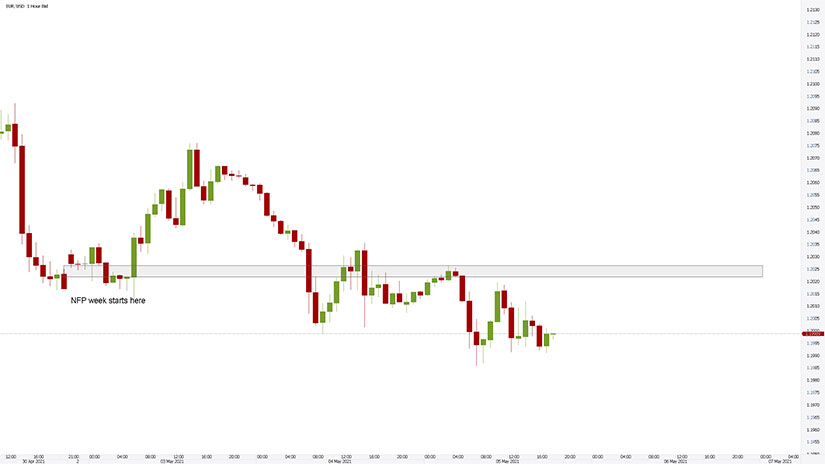 Another interesting aspect regarding the NFP comes from interpreting the market’s reaction. While trading the actual NFP release on the day of the release is difficult due to the trading algorithms dominating the market, the next week’s price action is easier to interpret.

The chart below shows the daily timeframe on the EURUSD pair. Each candlestick represents one day’s worth of price action, and we can see how the market reacted during and after the NFP reports in the last three months before writing this article. 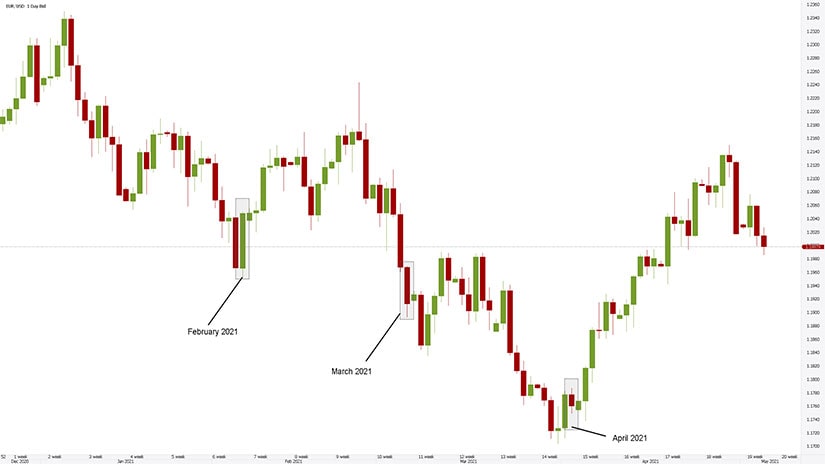 We can spot a pattern here based on the NFP daily candlestick. Let’s start from left to right with the February 2021 release.

The market had a strong day on the release, closing the week at the highs. Basically, it recovered some of the losses it took during the trading week.

The key stays with interpreting the first daily candlestick after Friday’s NFP reading. Because the chart above also shows the Sunday candlestick, the Monday one is the second candlestick following Friday’s price action.

One major hurdle with the NFP report is how to interpret the data. The report is complex, and traders need to pay attention to various details.

Besides the Unemployment Rate indicator, other sub-indicators may move the market. Think here at the labor participation rate, the permanent job losses, or frictional unemployment. These numbers alone are enough to mess up the initial market reaction if they do not confirm the headline number.

A breakdown of the data is also important. Because the US economy is a service-based economy, the jobs created or lost by the services sector are more relevant to future economic growth or slowdown than the ones from the manufacturing sector.

As is often the case, revisions do affect the price action. Therefore, they matter when interpreting the data.

To exemplify, imagine that the NFP report shows that the US economy added 100k new jobs. However, if the data from the previous two months is revised lower by a total of $45k jobs, then the actual jobs surplus is only $55k.

Suddenly, the market participants need to consider only half of the initial jobs number, and that is a problem in finding the right positioning after the report. Revisions, therefore, are enough to cause the market to turn around and to discount the NFP headline.

The jobs data from the United States is often released at the same time as the Canadian jobs data. By the same time, it means at the second.

Hence, it is very difficult to interpret and trade the USDCAD pair on a Friday when both countries release the jobs number for the previous months. What if the US data is better than expected, while the Canadian data is even better? Which currency will appreciate and which one will depreciate after the report?

Because of such confusion, many traders prefer to ignore the USDCAD pair on such a trading day and focus on other currency pairs. After all, the trading algorithms will buy and sell the pair based on both releases, and so the price action is chaotic.