Hello there, this is tradingpedia.com and this video introduces one of the most interesting indicators that exist in technical analysis. This is a Japanese indicator, called Ichimoku Kinko Hyo, and you should not be intimidated by the name, as it is not that complicated.

Where You Can Find The Ichimoku Kinko Hyo Indicator

As a matter of fact, a rough translation is “equilibrium at a glance”. It is offered by all trading platforms as a trend indicator, even though that is not necessarily true.

You can find in on the MT4 under Insert/Indicators/Trend. It is also called the Ichimoku cloud, or kumo. If you click on it, you will see three lines here – Senkou, Kinjun, Tenkan with 26, 9 and 52 periods. If you apply it on a chart, these are the elements that appear.

Why equilibrium? Focus on the current price. The EURUSD pair trades at 1.1723 at this point. Equilibrium means that the indicator already shows future values, but also has one element that refers to past values – the Chinkou line.

The Ichimoku has five elements: the Chinkou, then this red line called Tenkan, the Kinjun (blue) and then this one called the kumo or the cloud. The cloud is made of two lines – Senkou A and Senkou B. When Senkou A crosses above Senkou B, that is called a bullish cloud. The opposite is a bearish cloud.

Equilibrium at a glance because the cloud is projected 26 periods ahead and this indicator does not repaint. What does it mean? It means that values will not change based on the future price action. Not the Ichimoku – all the values remain the same, will not change.

The trick when interpreting Ichimoku is to understand this equilibrium. If you try to look back at past prices, you should not consider the cloud below the candlestick, but the cloud 26 periods ahead.

Let’s edit the indicator, to change the Chinkou color – let’s use magenta. The Ichimoku has five elements – the cloud and three other lines.

Various ways to trade with it exists. One way is to ride the trend. Namely, to trade the so-called Kinjun-Tenkan crosses. They signal short or long trades.

This cross, for instance, formed eight or nine days ago, and if you sell it here, when the cross happened, you will already have a profit. But this does not happen all the time. For example, we may have crosses that showed a bullish or bearish signal and the market did something else in the meantime.

Another way to look at it is that the cloud offers support or resistance depending on the trend. But as you are about to find out, it is not necessarily true, but most likely the Chinkou will try to avoid obstacles.

Trading with the Ichimoku Cloud

A rough translation for the Ichimoku Kinko Hyo is “equilibrium at a glance”. Effectively, it means that the current market price is in equilibrium, somewhere between future and past levels.

The interpretation of the current market price, therefore, depends both on future and past levels. On the right side of the chart, we have the cloud or kumo.

The cloud is formed by two lines – Senkou A and Senkou B. After their intersections, the cloud changes the color. For example, when Seknou A crosses above Senkou B, the cloud turns green, or bullish. Conversely, when Senkou B crosses below Senkou A, the cloud turns red, or bearish. 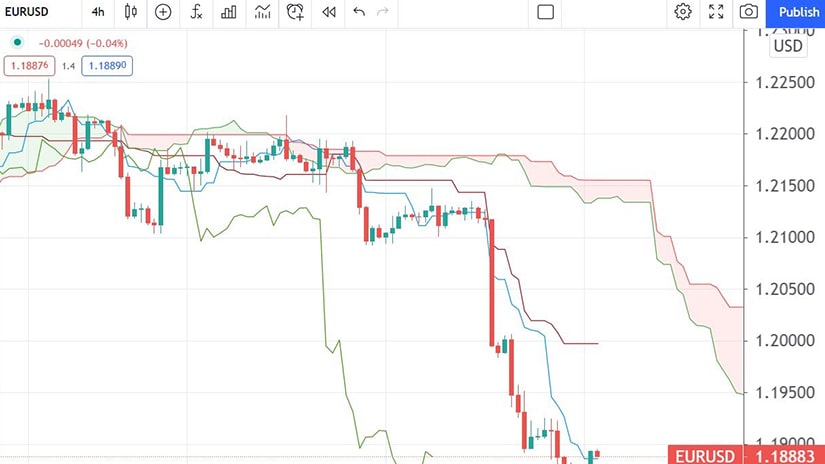 One way to use this information is to interpret the cloud as resistance when the actual price comes across. For the EURUSD pair to turn bullish, the price must cross through the cloud that acts as resistance.

The larger the timeframe, the stronger the resistance is. Also, the thicker the cloud, the stronger the resistance. Because the cloud is projected in advance, traders have an easier time setting the money management for a trade, or setting the entry level. For instance, one may decide to sell the EURUSD on a bounce higher, with a stop-loss order above the upper edge of the cloud and targeting a risk-reward ratio bigger than 1:2.

A Visual Guide of the Ichimoku Elements

The cloud or the kumo is viewed by many traders as the most important element of the Ichimoku Kinko Hyo indicator. But the indicator is viewed as giving the best results when all its elements are interpreted together. 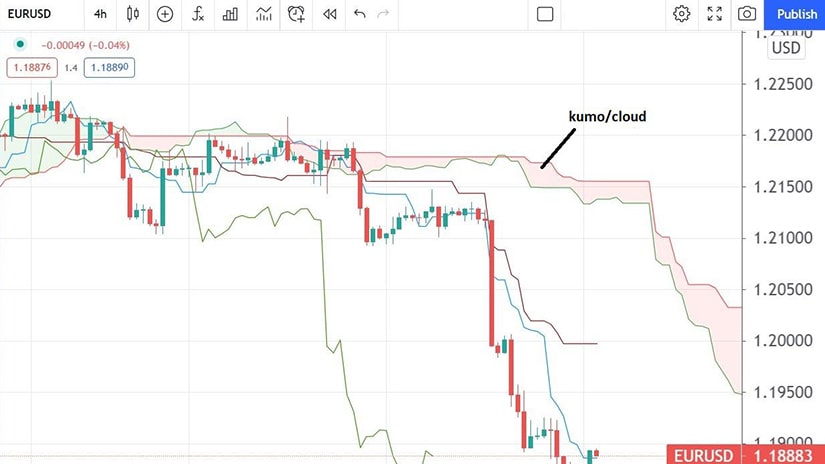 Here is a quick visual description of all the Ichimoku Kinko Hyo elements. As shown below, a bearish cloud is given by the Senkou A line moving below Senkou B.

When the market is trending, all the other Ichimoku elements are aligned, confirming the trend. In this case, the Tenkan line is below the Kinjun line, as it should be during a bearish trend. Remember that the Tenkan is just another form of a fast moving average while the Kinjun is a slower one. Therefore, their cross is highly regarded as showing possible market reversals.

Perhaps the most misunderstood element of the Ichimoku Kinko Hyo indicator is the Chinkou. This is the line that completes the state of equilibrium, always projected twenty-six periods behind the current market price. 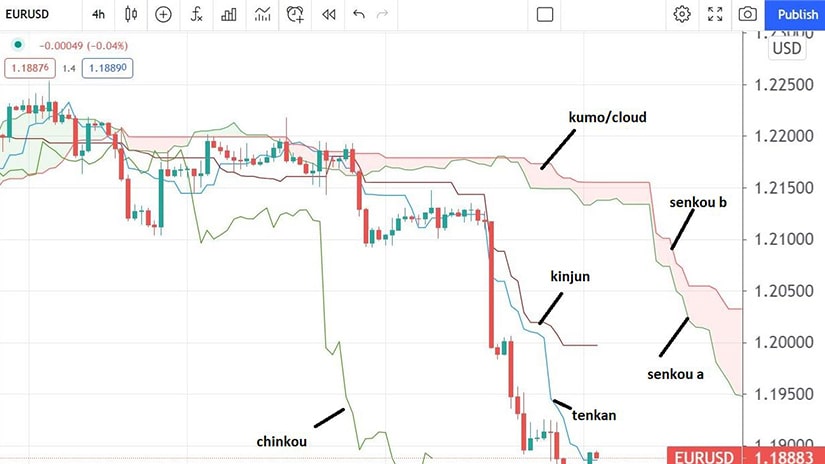 The Chinkou line confirms the trending conditions by keeping a distance from the other Ichimoku elements as well as from the actual price. The closer the Chinkou comes to the actual candlesticks, the weaker the trend becomes.

More often than not, Chinkou reacts to all the other elements part of this indicator. For example, Chinkou has a strong tendency to be rejected the first time it reaches the candlesticks. Therefore, because the Chinkou is the current market price’s representation twenty-six periods before, the Chinkou’s rejection from the actual candlesticks corresponds to the current market price’s rejection.

So far, we’ve presented one way to trade with the Ichimoku elements. That is, to sell against the upper edge of the cloud when the market is in a bearish trend.

Another way is to use the two averages, the Kinjun and Tenkan lines, and interpret their crossing. The two lines, if you want, act just as the regular SMAs that signal a bullish or a bearish market. For example, when the SMA(50) crosses above the SMA(200), the market forms a bullish or a golden cross. The opposite is a death cross, given by the SMA(50) moving below the SMA(200). 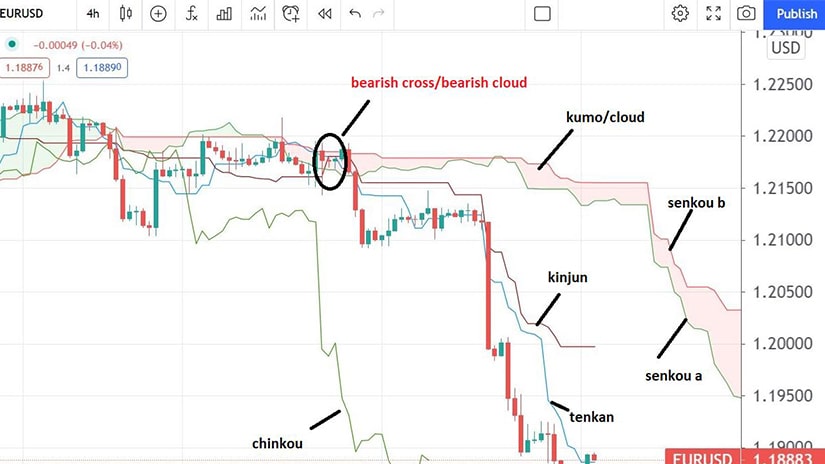 But using only the bullish or bearish crosses for a trade often leads to false signals. However, when used in combination with the cloud, results improve significantly.

In other words, on a bearish cross, make sure that the cloud is bearish too. More precisely, the cloud must have the color red at the same time when the Kinjun/Tenkan bearish cross forms.

Ideally, the setup would look like this. First, the price must be below or at the cloud. Second, the cloud must be bearish when the Tenkan line moves below the Kinjun line. Third, the Chinkou should meet some resistance given by one of the other Ichimoku elements.

We all know that the markets do reverse. How does a bullish reversal looks like and what needs to happen for the Ichimoku indicator to show bullish conditions?

Finally, once the Chinkou is above all the other Ichimoku elements and above the candlesticks, a bullish trend started. From that moment on, everything below represents support and the interpretation of the bullish trend is similar with the examples used in this article to document the bearish price action with the Ichimoku Kinko Hyo indicator.