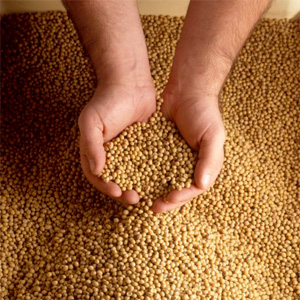 Grain futures were mixed on Tuesday with soybeans and wheat posting moderate losses, while corn was overall unchanged. Soybeans fell from a two-week high as U.S. farmers accelerated field work, while favorable conditions in Brazil boosted the outlook for a record crop.

DTN reported on Monday that unfavorable conditions in the Midwest continue to slow field work but dry weather in the second half of the week will be more favorable for the harvest. In Brazil, rain in the southern crop areas of Rio Grande do Sul and Parana during next week will cause some delays to the planting of crops and harvest of wheat but recent rains benefited crop developing, the agency said.

Brazils soybean planting progress is estimated at 18% finished, near the five-year average. The USDA predicted that the South American country may harvest an all-time high of 88 million tons of soybeans, while U.S. output may surge to 85.7 million tons. The government agency will release its next WASDE report (World Agricultural Supply and Demand Estimates) on November 8 after the latest was canceled on October 11 due to the lack of government funding.

The USDA said in its crop progress report yesterday that the corn harvest fell well behind last years pace. As of October 20, 39% of the crop was reaped compared to the five-year average of 53% and 85% in the comparable week in 2012.

As for the crop condition, 14% of the harvest was rated very poor-poor, while 26% of the plants were categorized as “Fair”. As for the premium grade, 60% of the crop fell in the “Good” and “Excellent” categories.

Wheat retreated further from yesterdays four-month high after the USDA reported that planting of the U.S. crop picked up and equaled the five-year average. Wheat December futures traded at $6.9763 per bushel at 9:40 GMT, down 0.20% on the day. Prices held in range between days high and low of $6.9913 and $6.9613 per bushel respectively. The grain fell by 0.9% on Monday and extended its weekly decline to 1.1%.

As of October 20, 79% of the U.S. winter wheat crop was planted, the USDA said, compared to 80% a year earlier and equaling the five-year average. The agency also said that 53% of plants had emerged, 1% below the five-year average but exceeding last years 48% during the comparable week .

As for the crop condition, 65% of the plants were rated good-excellent, while only 4% were categorized as very poor-poor and 31% fell in the “Fair” category.

DTN reported on October 21 that conditions in the Southern Plains will be favorable for planting and developing of wheat. In Argentina, warm weather and scattered showers ahead of a cold front during the weekend will benefit the wheat crop, the agency said. However, lows on Wednesday and Thursday are expected to turn negative, putting heading wheat at risk of freezing.

Wet and cool weather in Western and Eastern Europe will continue providing unfavorable conditions which will delay the harvest of late-summer crops and planting of winter wheat and rapeseed but will recharge soil moisture. A warmer trend with less rains over Western Europe is expected to begin this week and continue into the next, improving conditions for field work, DTN said.