Hello there, this is tradingpedia.com and this video deals with another concept related to the Elliott Waves Theory. We move on to the flat patterns, and a flat is a corrective pattern labeled with letters: a-b-c.

The key to interpreting the flat pattern is the b-wave. Namely, it must retrace more than 61.8% of wave a. Also, another thing to consider is that both waves a and b are corrective, while only the c-wave is impulsive.

In other words, of a lower degree, waves a and b may form a simple or a complex correction, and the c-wave must be an impulsive wave, 1-2-3-4-5.

A flat pattern looks like this in a bearish trend. The market makes a correction, labeled as wave a. Only by the fact that we use a letter, we assume a corrective structure.

Because the key stays with the b-wave, it must retrace beyond 61.8% of wave a. So, the next market segment must exceed or retrace the level, for the market to form a flat. Therefore, this is the end of the b-wave. And then the market forms an impulsive wave in the opposite direction, and this is how a flat pattern looks like.

This is one type of a flat pattern, but there are no less than ten types of flat patterns. The idea is to identify correctly the b-wave as it holds the secret in interpreting a flat pattern.

Literally, there are three categories to consider, depending where the b-wave ends. For this, we need to find out the 61.8% level. The next level is 100% and then 123.6%. Also, let’s write here that depending on the b-wave ends, we have a different category of flats.

As you can see, wave a has no influence, the c-wave gives the type of the flat, but everything is subject to the interpretation of the b-wave’s length.

Let’s that this EURUSD at 1.1917, the previous high. The market moved lower and this segment does not look like an impulsive wave for the simple reason that it is split in equal parts, meaning that there is no extension. We might consider that this is wave a of a flat.

If we know the end of the b-wave, this is called a flat with a normal b-wave and the c-wave tells us the type of the flat and we interpret the next move.

Stay tuned for the second part as we describe the three flat patterns that come into the category of flats with a weak b-wave. Bye, bye.

However, we should not take the wording literally. Indeed, flat patterns do have only three segments, so the term applies here. But triangles, for example, have five segments. Yet, Elliott traders refer to them as three-wave structure only to point out the fact that they are corrective patterns.

But here comes the trick. While the entire pattern, the flat, is corrective, not all of its segments are. Out of the three waves, only waves a and b are corrective, while wave c is impulsive. Put it differently, a flat pattern is a corrective pattern within the Elliott Waves Theory that has an impulsive structure as the c-wave. 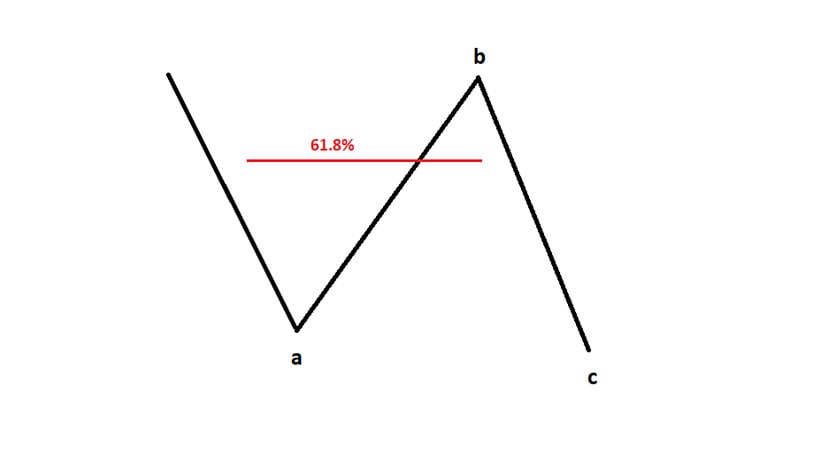 A simple illustration of a flat pattern would look like above. The red line marks the 61.8% retracement of wave a. Without such retracement, we cannot talk about a flat pattern. It is mandatory for the price action that follows after wave a is completed, that the b-wave retraces at least 61.8% of wave a’s distance.

Breaking Down the Flat Pattern

A flat pattern is, therefore, a corrective structure with waves a and b corrective, and wave c impulsive. Let’s take them separately and discuss what structures one can expect within the flat pattern.

Wave a is corrective. The Elliott Waves Theory tells us that there are two types of corrective waves – simple and complex. Both a simple or a complex correction might form as the wave a of a flat pattern. 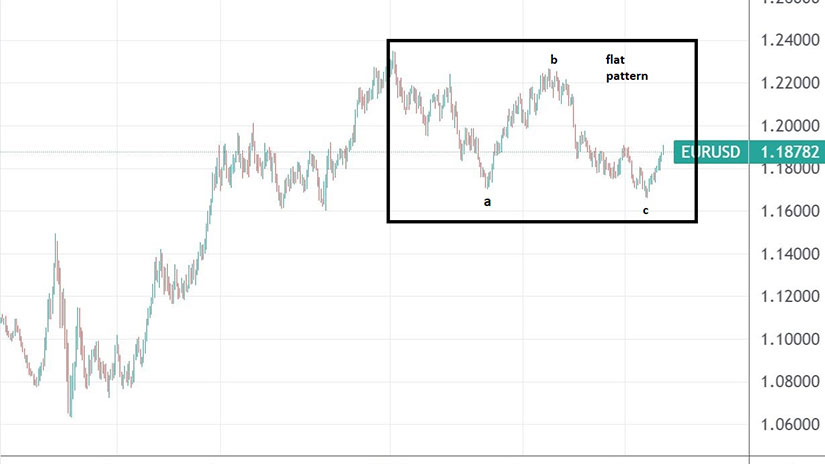 On the other hand, if the wave a of a flat is a complex correction, it means that it will have at least one, and maximum two, intervening waves. An intervening wave is called the x-wave, and its “job” is to connect the simple corrective waves part of the complex structure. Typically, the wave a of a flat is either a double combination of a lower degree, or a simple flat or zigzag pattern.

Everything said about wave a of a flat is valid for wave b as well, which leaves us with wave c – the impulsive wave.

Two types of impulsive waves exist, according to the Elliott Waves Theory – classic and terminal. While labeled with numbers, the only difference between the two is that in a terminal impulsive wave all segments are corrective.

Interpreting the B-Wave Is Key

In each of these categories, we can include three types of flats, based on the length of the c-wave.

In this category, we have:

The following types of flats are included in this category

Here, we can include:

Flats are common patterns forming on all markets. Either simple corrections or part of a complex one, flat patterns are everywhere.

2021 brought a possible flat pattern on the EURUSD daily chart. The market started the year with a bearish tone, effectively correcting ever since.
We see the pair dropping from its 1.23 highs in January to below 1.18. the drop was followed by a strong retracement – the pair traded above 1.22 in May-June this year.

Because the retracement went beyond 61.8%, we might say that the minimum condition for a flat has been met. But the b-wave retraced more than 80% of wave a, so the flat belongs into the normal b-wave category.

All traders need to find out now is if the c-wave, the impulsive move, is completed. If yes, the flat ended and Elliott traders must decide if the flat is an individual corrective wave (i.e., a simple one) or a complex one. 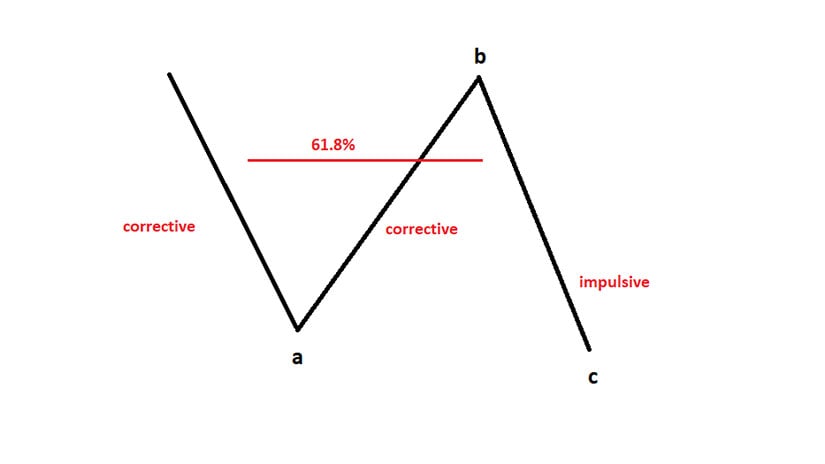 The AUDUSD pair gave us another example of a flat pattern in 2021. On its drop from 0.80 to 0.71, the pair consolidated for a while, forming a flat pattern. The b-wave’s retracement went beyond the 100% of the wave a, and thus the flat belongs to the strong b-wave category.

Because the c-wave failed to fully retrace the b-wave, the flat is called a flat with an irregular failure. Any flat with a failure signals countertrend strength. Therefore, by the time the c-wave ended, the bearish trend resumed. 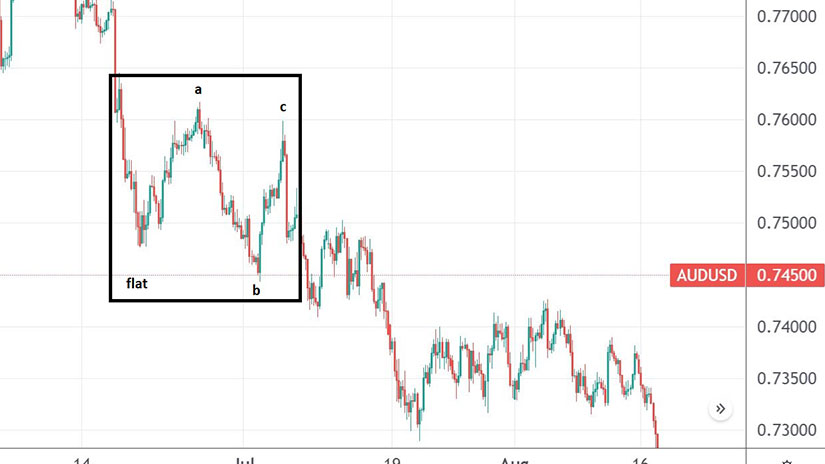