Hello there, this is tradingpedia.com and this video deals with the Canadian dollar – what to consider when trading the Canadian dollar, a currency like no other on the FX dashboard. It reflects the economic evolution of one of the most developed economies in the world.

Imagine that the price of oil, for instance, that trades now around $40, jumps to $100. If the price of oil rises like this, the Canadian dollar will appreciate, and the USDCAD exchange rate will decrease. The implications are that more people will be employed in the sector, more income or revenue stream from the oil products will flow to Canada, and therefore it is a positive for everyone.

This is where the oil price collapsed from $100 to $30 in 2016 and the USDCAD was the first one to reflect that. When it comes to the oil price, look at OPEC meetings and oil inventories in the United States.

Canada exports plenty of oil to the United States – after all, the two countries share a common border. The USDCAD exchange rate, therefore, is very important for the Canadian oil industry.

In terms of Canadian economic data, consider one of the most relevant economic release. This is a PMI and, unlike like other developed countries, Canada calculates the PMI for all the economy. In the United States, for example, there is the ISM Manufacturing and Non-Manufacturing, in Australia you have the PMI Manufacturing, Services and Construction, and so it is in the United Kingdom too.

But in Canada there is only one release that covers all the sectors and the PMI is interpreted in relation to the 50 level. If the PMI comes bigger than the 50 level, it means that the Canadian economy is expanding. If not, it is contracting. That is a relevant benchmark for economic growth in Canada.

And then there is the all-important jobs data, or unemployment data. Why it is important? Most of the time throughout the year it comes out at the same time with the NFP in the United States, making it very difficult to trade the USDCAD pair.

The NFP comes out every first Friday of the month. At the same time, the Canadian jobs data is released. If the U.S. data beats expectations, you will have a higher USD. But if the Canadian data beats expectations as well, you will have a higher CAD as well. So, one data is positive for the USD and the other set of data is positive for the CAD. Therefore, what will the USDCAD do?

Between the two, always look at the NFP for direction because the USD is the world’s reserve currency and it matters the most in the world’s financial system. Also, look at revisions, from both the United States and Canada. The jobs data is one of the most difficult to interpret and it moves the CAD aggressively.

Last but not least, there is Bank of Canada. This is one of the most proactive central banks in the world. It is not uncommon for the Bank of Canada to deliver surprises. Last year or the year ahead it delivered a 50 basis points rate hike or cut, on expectations of only 25 basis points. So, it took markets by surprise and created wild volatility. Therefore, Bank of Canada is a wild card when trading the Canadian dollar, so watch for press conferences, and so on.

Finally, think of liquidity. The Canadian dollar is one of the most illiquid currencies. If you look at the FX dashboard, for example, the AUDCAD. On this broker has a spread of almost two pip points – but at midnight, when the broker rolls over the position, you will see that the spread increases dramatically, especially if the account is ECN (Electronic Communication Network) or STP (Straight-Through Processing).

In this case, the broker will show the market, and during the rollover, the spread will be so wide that it will often exceed ten pips on the CAD. You won’t see that kind of spread on the EURUSD, for instance, but you will see it on the USDCAD pair. So if you are forced to trade the Canadian dollar during illiquid times, you will have a hard time trading a bigger volume and will have to pay a price in terms of slippage and bigger spreads.

Oil and the Canadian Dollar – A Direct Correlation to Consider

Despite climate change and active measures taken by governments worldwide to tackle it, oil remains the key component of the energy mix. Advanced economies, from Europe to American and Asia, fight climate change by favoring investment in alternative sources of energy such as solar or wind.

However, until the decarbonization goals or targets are achieved, oil will still play a critical role in energy production. Moreover, oil is responsible for much more than just producing energy. For example, it has numerous uses in the petrochemical industry, to mention only one of its uses.

In other words, oil is here to stay, even if its share of the energy mix will diminish in time. Technological advances and innovations will likely lead to new uses for oil in the future in non-polluting businesses. Therefore, oil is here to stay and countries with large oil reserves still stand to benefit from this incredible resource.

Canada is such a country. As resources are not distributed equally among countries, oil reserves are also spread between countries.

Venezuela is the number one country with proven oil reserves in the world. It sits on over two hundred billion barrels of proved oil reserves, outpacing even Saudi Arabia, the second country in the ranking.

Canada’s “fortunes” when it comes to oil reserves changed dramatically in 2002. Based on new estimates of oil sands, Canada’s proved oil reserves jumped from five to one-hundred and eighty billion barrels of oil.

From that moment on, the Canadian dollar’s direct correlation with the price of oil increased. New investments poured into the Canadian oil industry, and nowadays, close to half a million people are employed in the oil and natural gas industries combined.

COVID-19 Pandemic, the Price of Oil, and the Canadian Dollar

The COVID-19 pandemic brought with it a sharp decline in the demand for oil. Because economies entered lockdowns at the same time, the recession hit all countries simultaneously.

As a consequence, the price of oil declined dramatically. For the first time in history, the futures contracts for the April delivery settled below zero. It should be noted that the futures exchanges settle the prices for the futures contracts on a daily basis, marking them to market at the close of the business day, and one side makes a profit, and the other one marks a loss.

Because it allowed the price to settle below zero, trading continued and oil settled close to -$40. In other words, there was so much oil out of the ground that producers were willing to pay for someone to come and collect the oil.

At the peak of the pandemic, the price of oil bottomed. It had retraced ever since, starting a bullish trend that keeps going at the time of writing this article. The market continues to form higher highs and higher lows, a typical series in a bullish market. 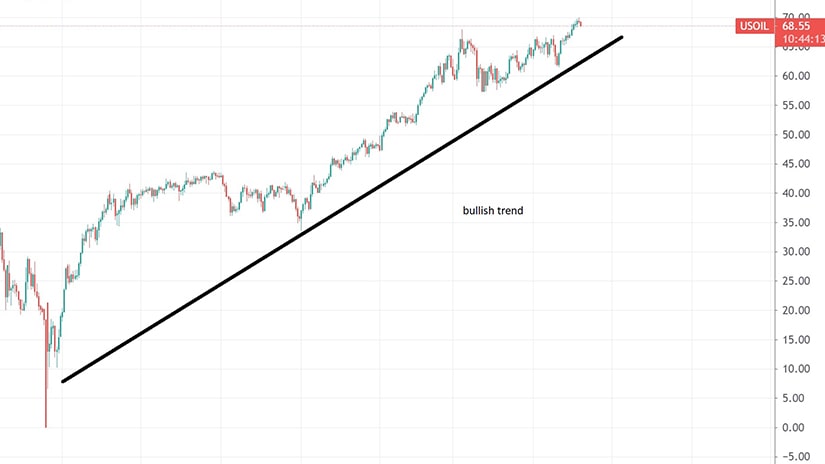 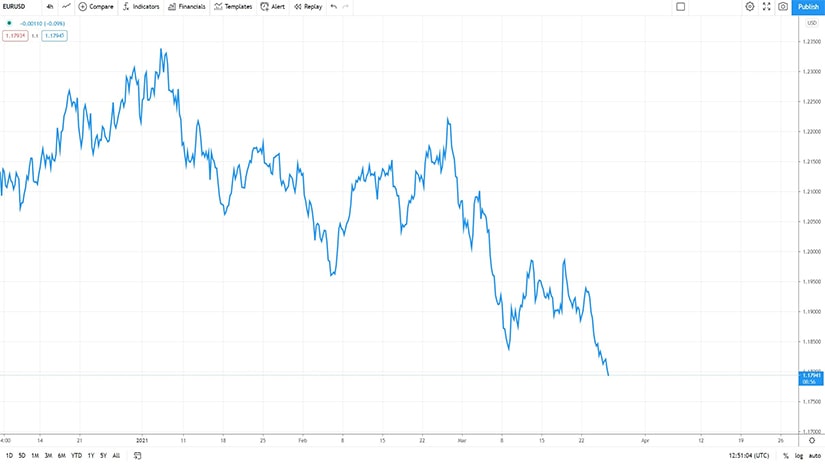 Basically, the USDCAD reached a top at 1.46 when the price of oil settled in negative territory. Since then, the trend in both markets has reversed drastically.

Oil and Inflation – The Canadian Dollar Used as Proxy for Inflation

The price of oil is a major driver of inflation. Higher oil prices lead to increased inflation expectations that would eventually translate in an increase in the indicators that track inflation – the Consumer Price Index (CPI), the Core CPI, the Personal Consumption Expenditure.

More precisely, do traders gain a competitive advantage from the Canadian dollar in regards to inflation expectations? The right answer is yes, they do, and the direct correlation between oil and the Canadian dollar spares traders from monitoring the oil market developments, for example. All one has to do is to monitor the USDCAD pair and on any reaction from the underlying trend, it means something happens on the crude oil market.

Consider the recent 1.20 level that acts as a support for the USDCAD pair. At the current exchange rate, the corresponding WTI crude oil price is $70.

If the USDCAD is to drop below 1.20 without an important economic release, such as the jobs data, it means that the price of oil continues to rally above $70.

Hence, inflation expectations will mount and the next thing is to prepare for the CPI releases in the United States for the current month. The likelihood is that the inflation will exceed the forecast, hence providing a competitive advantage to traders.

Besides the price of oil, some Canadian economic releases and local monetary policy decisions may move the Canadian dollar too. If and when that happens, traders should compare the implications or the “damage” on the chart with what happened with the price of oil.

A reversal pattern on the USDCAD might be ignored if the crude oil chart does not signal a reversal too. Effectively, it is too risky to trade the Canadian dollar on a stand-alone basis without checking the price of oil. A sudden move on the price of oil may trigger sharp reactions on the Canadian dollar, thus discounting the reaction to the economic releases or to the local monetary policy.