Hello there, this is tradingpedia.com and this video deals with the Bank of England, one of the oldest central banks in the world, and the British Pound, of course – a currency that used to be the world’s reserve currency.

The British Pound lost its greatness as the British empire’s influence declined, but it still remains one of the man actors on the FX exchange board and one of the most powerful fiat currencies, especially after 1970’s Nixon shock. That is the moment when the fiat currencies started to free-float against another.

The British Pound or GBP is a currency very popular among traders. EURGBP, GBPJPY (a currency pair with a bigger average true range than usual), GBPUSD, also called the cable pair, after the cable laid down on the bottom of the ocean for the two financial centers, London and New York, to communicate, GBPAUD, GBPCHF, GBPCAD – they are all important currency pairs and they provide tremendous opportunities.

What to consider when it comes to Bank of England? The Bank of England is one of the most conservative central banks in the world. Its interest rate decision come out on a Thursday every six week and there would be no press conference if there is no change in the interest rate policy. For this reason, especially in the aftermath of 2008-2009 Great Financial Crisis, traders had a hard time understanding the Bank of England policy because these guys met but they did not decide anything. So the question was – why meeting in the first place?

A central bank needs to meet in order to assess the economic developments before deciding what to do with the rates – keep them unchanged, cut them or raise them. So the Bank of England will release a statement and have a press conference only if there is a change.

Also, look for the PMIs when trading the GBP. In the UK there is one PMI for each crucial sector – services, manufacturing, and construction. If the PMI prints above 50, the sector expands, if it prints below, it contracts.

The bigger the distance from the 50 level, the bigger the expansion or contraction is. Out of the three sectors, the services sector is the most important one because the UK is a service-based economy, so the services sector has a bigger proportion in the UK’s GDP. Therefore, often you will see the PMI manufacturing data disappointing while the PMI services exceeding expectations and overall the GBP will move higher.

There are some exceptions, like the last tightening cycle in 2018-2019 in the United States but that one now is viewed as a mistake. Therefore, Bank of England, by not copying the Fed’s decision, it was in a better position for the crisis to come.

Bank of England’s inflation letter, the PMIs, the GDP – but above all, consider the decisions taken in the last years. Brexit, the negotiations that followed, the uncertainty – all these play a crucial role for the pound. Like it or not, the United Kingdom is closer to Europe and the single market than the United States.

Volatility is bigger on the GBP pairs when compared to other pairs, spreads are bigger as well, GBPJPY is viewed as one of the pairs with the largest ATR, and the GBP used to be the world’s reserve currency but lost that status to the USD.

The Bank of England is one of the oldest central banks in the world. It used to be one of the most influential central banks, at least at the time when the British pound was the world’s reserve currency.

Nowadays, the central bank has a limited role in the international financial markets, but an important one for anyone willing to do business in the United Kingdom or to trade the local currency – the British pound.

Perhaps there is no better time to discuss the local role of the British pound than in the aftermath of Brexit. The 2016 Brexit referendum had an unexpected result, leading to the United Kingdom’s exit from the European Union.

Ever since the international role of the pound declined significantly. In the four years that followed the Brexit vote and until the exit negotiations ended, the British pound traded more like an emerging markets currency rather than a leading currency of the Forex dashboard.

Particularities of the United Kingdom’s Economy After Brexit

The United Kingdom may have exited the European Union, but the British pound existed even during its membership. The country has kept the pound despite being a member of the European Union, choosing to set its own monetary policy and not to participate in the common currency project.

Make no mistake, the country is one of the richest in the world. The British financial services industry is the envy of the world, although its importance declined significantly in the aftermath of the 2016 vote. 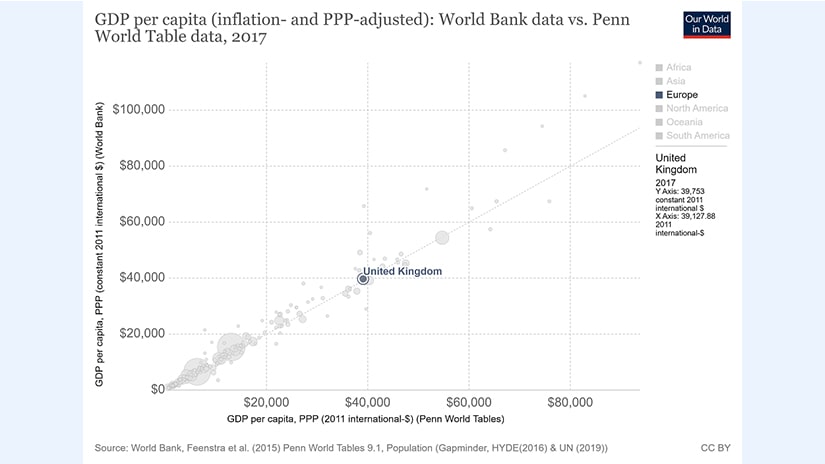 The four years of negotiations between the United Kingdom and the European Union that followed the Brexit vote turned out to be very difficult for both parties. The British pound lost ground against the euro al this time, and the best way to visualize it is to check the EURGBP chart over the period. 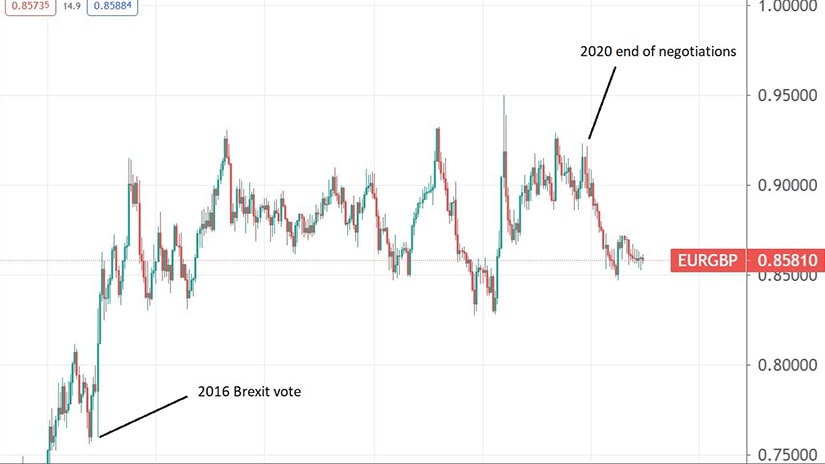 The EURGBP cross started the referendum day close to 0.75 and quickly jumped higher as investors sold the British pound. Four years of negotiations led to a long-term consolidation between 0.85 and 0.95, with many investors waiting for the cross to reach parity.

Parity, however, was not reached. In fact, after the negotiations ended in December 2020, the British pound quickly recovered the lost ground.

The COVID-19 pandemic has hit the world economy in such a way that it triggered a global economic recession. All countries saw their GDP contracting as lockdowns were imposed everywhere.

In November 2020, promising signs showed that vaccines are effective in the fight against the virus. The United Kingdom was one of the first countries to secure vaccines for its adult population and so the pound appreciated on expectations of a faster economic recovery when compared to its rivals.

We might say, therefore, that the recovery in the British pound pairs was mainly due to the pandemic. However, one should not disregard the ability of the United Kingdom’s economy to outperform its peers, nor the investors’ appetite for the new investment opportunities in the country and, why not, in its currency.

The United Kingdom’s economy is a service-based one. Like in all developed economies, the services sector is responsible for a huge chunk of the annual GDP.

After the Brexit, the British pound lost ground literally against all its peers. But years have passed, the time healed the initial surprise, and now the pound has recovered most, if not all, of the lost ground. 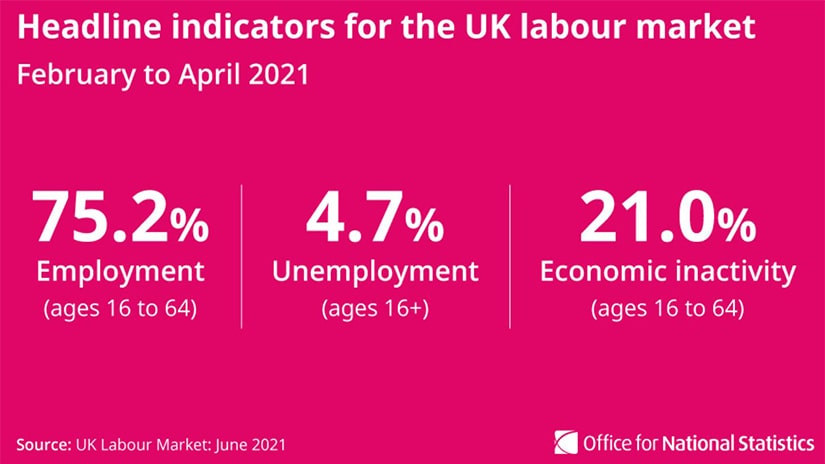 As of April 2021, employment in the country has reached 75.2%, while the unemployment rate is at 4.7%. However, most of the unemployed people are still under some government support, as the country engaged into both fiscal and monetary stimulus in the fight against the pandemic.

Brexit brought unprecedented challenges for the United Kingdom’s economy. First, the country now has to fill in papers to import or export out of or into the European Union. Regardless of the motives to vote for Brexit, patriotic or not, the European Union and its single market represent the main trading partner to the country.

Sure enough, the country started negotiating new trade deals with other parts of the world, but a big chunk of its exports was destined to the European Union prior to Brexit. Therefore, one of the main challenges ahead remains how the United Kingdom and the European Union choose to move along – as partners in trade or not.

Challenges for the Bank of England 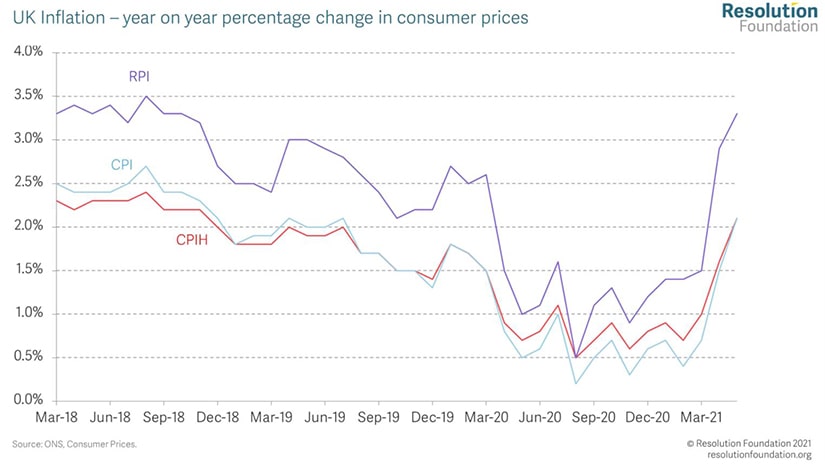 Higher inflation is not a problem only in the United Kingdom – the United States has seen inflation rising as well, so the Federal Reserve is expected to react to the increase in prices. Because the Fed and the Bank of England have historically moved interest rates in unison, the implications are that the Bank of England will act as soon as the Fed does.

The Fed has shifted to an average inflation targeting during the COVID-19 pandemic, while the Bank of England did not. Rumors in the market are that the European Central Bank will follow the path laid down by the Federal Reserve. As such, one should not be surprised to see the Bank of England adopting a similar mandate in the months/years to come.

All in all, the Bank of England and its monetary decisions are the driving factor behind the major British pound moves. Now that Brexit is behind, traders may focus more on what the Bank of England does and the effect of its actions on the local currency.