Hello there, this is tradingpedia.com and this video deals with the ECB or the European Central Bank, the ECB press conference, interest rate decision, and what matters for the Euro.

The ECB meets every six weeks, on a Thursday, to set the interest rates on the Euro. It establishes three interest rates, with the deposit facility rate being the most important one, currently below the zero level for many years.

During the press conference, press representatives ask questions and the Euro travels all over the place. The press conference starts with a statement, when the ECB President reads the statement and then it answers questions regarding the ECB actions, what the ECB delivered, if there was unanimity, inflation, etc. That is the most volatile period for the Euro pairs, and in particular the EURUSD.

How ECB Manage the Inflation

The ECB has a single mandate that focuses on price stability, or inflation below but close to two percent. If inflation comes to 2% and breaks to the upside, the ECB will intervene, it will change the tone to hawkish and the Euro will appreciate because the expectations grow that the ECB will hike the interest rates or at least tighten the monetary policy.

On the other hand, if inflation moves towards the zero level, the ECB will be forced to intervene too. This is what happened this week, as inflation in the Euro area came at 0.4% and the ECB looks at the core inflation. This data shows the change in prices without considering energy prices like transportation, and so on. That core inflation dropped to 0.4% from one point something and it threatens to break below the zero level and the ECB cannot stand seeing its mandate being threatened.

So, the expectations grew that the ECB will change the tone at the next week’s press conference. But the inflation was released right here. After the release, the EURUSD made a new high, a marginal one, and then sold aggressively, as investors prepared for the ECB decision next week.

You might say that this was the NFP week and everything relates to the NFP this week. Yes and no. Trading is a forward-looking process and what matters now is what the ECB will do next week. Based on what inflation showed, the ECB should change the tone to dovish if not delivering more easing.

During the press conference focus on the statement and the upcoming questions. Inflation is what matters the most for the ECB. This is what you should look when trading the Euro.

Also, watch for verbal interventions. This week, for instance, when the EURUSD reached the 1.20 level, the ECB Chief Economist Philip Lane came out and say that the ECB does not target a specific exchange rate, but the EURUSD rate matters. From that moment on, at 1.20, the market trades at 1.1790, mostly the result of verbal intervention.

Look also for the PMIs, released throughout the trading month, and they are surveys that show contractionary and expansionary sectors. If a sector expands, the PMI comes above the 50 level, if it contracts, it comes below the 50 level.

The monthly evolution of the PMI gives you an idea about what the market might do.

During the ECB day, the market already priced in what it is to be expected and then 45 minutes before the press conference, there is the interest rate decision. If the ECB considers that the interest rate decision is not enough, the ECB will deliver some more – some tweets, some short news, trying to prepare the market for what’s about to come. Then, on the actual statement, the Euro often moves before the President reading the statement.

Challenges for the Common Currency

Euro was born two decades ago as a result of further European integration. Throughout history, currency unions did not survive, so many voices quickly said that the euro would have a similar faith.

But since its introduction, the Gross Domestic Product (GDP) per capita in the Euro area is constantly growing. In other words, the euro fostered growth and competitiveness, quickly becoming the pillar the European Union is built upon. 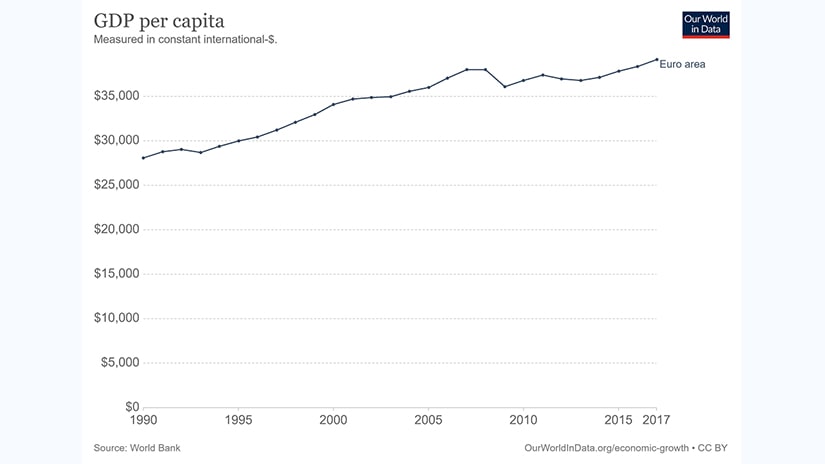 In its short history, the euro faced several crises already. More precisely, the Great Financial Crisis of 2008-2009, the sovereign crisis of 2012, and the COVID-19 crisis in 2020.

The first crisis started in the United States housing sector. The housing bubble in America has quickly spread in the developed world, triggering an economic recession in the Euro area as well.

After only a few years, the sovereign European crisis triggered by the Greek economic crisis has almost destroyed the common currency. Mario Draghi, then the President of the European Central Bank (ECB), is credited with saving the euro by using the famous “whatever it takes” when talking about what the ECB will do to protect the common currency.

The third crisis is a test for all economies – developed, developing, emerging, or frontier. The COVID-19 pandemic sent the world economies in a deep recession, and central banks and governments were forced to intervene by easing the monetary, respectively, the fiscal policies.

During all these crises, the ECB had a crucial role in financial markets. If the first two ones were aggravated by the credit markets putting pressure on the credit spreads, the COVID-19 crisis has bolstered the role of the euro.

For the first time ever, Europe has issued joint debt, and the financial markets welcomed the news. The newly issued bonds rival the US Treasury ones, and the offer was oversubscribed multiple times.

The ECB has one of the most difficult tasks among all central banks in the world. It must set the monetary policy for the Euro area as a whole despite some huge economic divergences between North and South.

Countries in the North of Europe, such as France, Germany, or the Netherlands, have long outperformed economically countries in the South, such as Spain, Greece, or Italy. Yet, the ECB must find a common monetary policy applicable to all countries in the euro area, a difficult and challenging task.

Because of that, the ECB was forced to cut its interest rate below zero in the aftermath of the 2012 sovereign crisis. Deflationary pressures have forced the ECB to cut the interest rate below zero, becoming one of the first central banks in the developed world to do so. It remains unclear if the benefits of holding the rates below zero outweigh the costs, but the ECB did not have the chance to lift them again until the 2020 pandemic.

The problem for the ECB is that when the pandemic has hit the Euro area economies, it had no room to maneuver as the deposit rate facility was already in negative territory. In comparison, the Federal Reserve of the United States lowered the federal funds rate from close to 2% to zero, benefiting from the fact that it had hiked them earlier in the economic cycle. 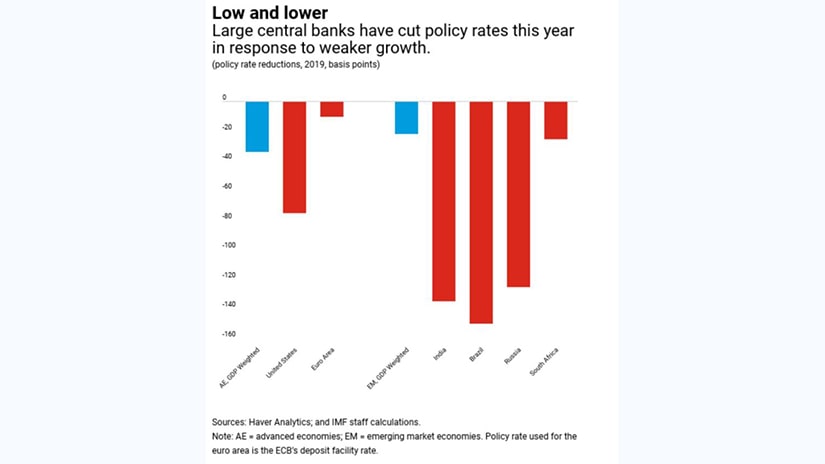 Trading an interest rate decision is never easy, but it is particularly difficult in the case of the ECB. Every six weeks, on a Thursday, the ECB delivers its monetary policy statement.

The trader should know that for the ECB all that matters is the inflation rate. This is why the ECB lowered the interest rates below zero, and so trends in the inflation rate are critical to the message the ECB sends. 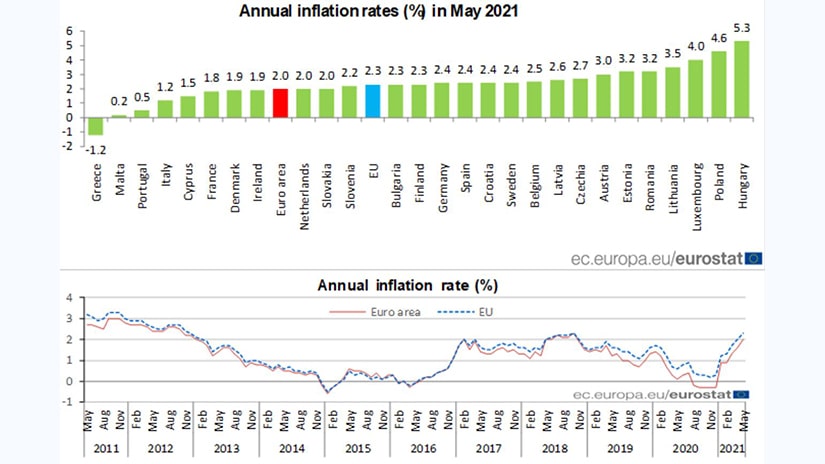 The annual inflation rate and changes in the inflation rate weigh much in the ECB decision and the euro’s volatility. Every other meeting, the ECB also publishes the staff projections regarding economic growth, so the future inflation levels, as well as employment levels, may move the euro aggressively. 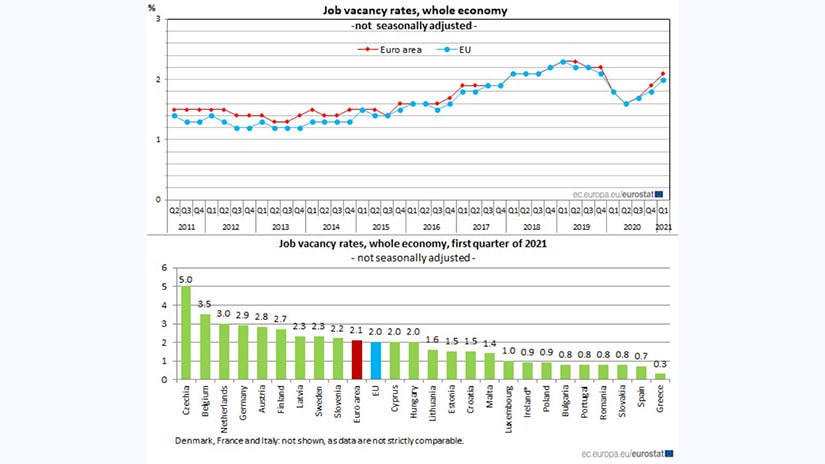 Other central banks, such as the Fed in the United States, have a dual mandate. Besides inflation, they look at employment data and typically have a threshold connected to a certain unemployment rate level.

This is why the Fed is reluctant to taper the asset purchases in 2021 despite inflation running hot, at its highest level since the 1980s. Because the other part of the mandate, the job creation, is far from full recovery, the Fed cannot say that it fulfilled its mandate.

It is not the same for the ECB. If inflation gets close to its target of 2%, the ECB will be forced to raise the interest rates from negative territory or else it is losing its credibility. Or, for a central bank, trust and credibility are two important assets that, once lost, are difficult to regain.

Nevertheless, the ECB looks at other economic data before acting on interest rates. Look for the GDP projections and the unemployment rate projections as released by the ECB staff to move the euro during the ECB press conference.

The volatility surrounding the euro pairs increases significantly during the press conference, particularly in the second part of it. It is then when financial journalists ask difficult questions and the way the ECB President responds creates sudden moves in the euro pairs.

All in all, the ECB interest rate decisions and press conferences are the number one events that matter for the euro. As is often the case, the euro pairs move in very tight ranges during the ECB week, up to the moment the ECB delivers its decision. After that, trading on the euro pairs may start.