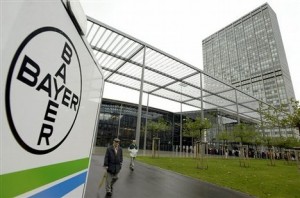 Bayer AG made an official statement today, revealing that it expects its average annual revenue from the companys pharmaceutical business to increase by 8%, with a margin for earnings before interest, tax, amortization and depreciation of at least 33%.

The company also forecast a 6% growth in the HealthCare and Crop Protection units profit due to strong sales growth, with a profit margin of 24%-25%. No specific projection was provided by Bayer AG for its material-science chemicals units. A sales growth estimated to 3% was said to be expected by the company from its Consumer Health business.

Bayer AG also said in its statement that it forecasts that its Material Science plastics unit, which is a business responsible for producing chemicals for industries such as cosmetics and auto parts, will earn its cost of capital again by 2016 at the latest.

However, one of the analysts, who work for London-based Jefferies – Mr. Jeffrey Holford – considers that the company may dispose of its Material Science unit in the next couple of years. Mr. Holfold also shared in a report last week that Bayer may use the money from the sale of the Material Science business for financing acquisitions in animal and consumer health.

Marijn Dekkers, who is the Chief Executive Officer of the company, said in the statement, which was cited by Bloomberg: “I’m particularly confident about our health care business thanks to the encouraging development of the five pharmaceutical products we have recently launched.” As reported by the Wall Street Journal, Mr. Marijn Dekkers also said: “Our goal remains to become the world leader in the OTC business.”