Hello there, this is tradingpedia.com and this video deals with one of the strongest, if not the strongest currency pair on the FX dashboard – the Swiss Franc (CHF). We will cover the particularities of this currency and the Swiss National Bank (SNB).

What you see here is the monthly USDCHF – all the data available on this broker. As you can see, the USDCHF at one point in time was even 2, and now the focus is on 1, the parity level. It flirted with this level for the last year.

What is this chart telling us? The CHF is viewed as a safe-haven currency. Therefore, this is the first thing to consider. It means that investors are willing to take additional costs to gain exposure to the CHF. When bad things happen, and they do (recessions), when the economy enters a recession, then investors look for protection in various assets.
The CHF is such an asset. The JPY is another. But the CHF is the desired currency for investors to keep their funds.

The SNB is in charge with setting the interest rate on the CHF. This is one of the most active central banks in the world. It intervenes actively to support the decline or stop the appreciation of the CHF. Even so, it has a very hard time managing to do so.

As such, it was no market anymore for the CHF as it effectively went to 0.72 from parity. In the meantime, it recovered, but nevertheless it shows the strong demand for the CHF from the international community.

Nowadays, the SNB is very active in diversifying flows from the CHF. For instance, the SNB is an investor in the tech sector in the United States. It owns shares in companies like Apply, Microsoft, and so on. In order to pay for them, it must sell CHF and buy USD, and this way it supports a higher USDCHF.

The SNB charges -0.75% in Switzerland and some of the commercial banks transferred that rate to deposits bigger than CHF100k. Yet, those deposits exist and the USDCHF has a hard time reaching parity.

Therefore, next time when you trade the CHF think of the fact that there is always an entity that makes no secret that it intervenes only on one side – selling the CHF. So, between buying CHF and selling CHF keep in mind that the SNB favors a weak CHF.

The CHF is the stronger currency on the FX market at this point in time. the SNB does not have an interest rate decision every month or six-weeks like other central banks, but it delivers its statement quarterly. It is very important to monitor the SNB website and Twitter account because the bank announces the changes in ownership of foreign ownership of assets, and so on.

The CHF depends a lot on the SNB policy, and there are not many important economic news out of Switzerland that really move the CHF. Therefore, the focus sits with the international flows, geopolitics, macroeconomics, and with the actions of the SNB.

SNB is a private entity as its shares are listed on the stock exchange. It acts, more or less as a hedge fund. It has diversified assets all over the world and it has a budge for FX interventions to sell the CHF. This is why the USD has a hard time rallying against the CHF.

The SNB has a different calendar than other central banks. It releases a comprehensive monetary policy assessment only four times a year.

In comparison, most central banks in the developed world release their statements every six weeks. Examples here include the Federal Reserve of the United States or the European Central Bank. Some other ones, like the Reserve Bank of Australia, does so monthly.

Therefore, a central bank like the SNB is unique in the developed world, as it asserts the status of its monetary policy quarterly. The SNB decisions do not usually trigger volatility in the market, but sometimes they do.

The SNB fights against the Swiss franc’s safe-haven status. Whenever things go wrong in the global economy, be it rising inflation or poor economic data, investors turn their attention to the Swiss franc.

Although the SNB has dropped the interest rate to the lowest in the advanced economies, investors keep buying the franc despite the unfavorable conditions. Because of that, the SNB has a hard time setting the monetary policy because the flows into and out of the local currency are unusual when compared to flows in other fiat currencies.

As mentioned earlier in the article, the SNB intervenes very often in the currency market to try to slow down the franc’s appreciation. In its view, the Swiss franc is way overvalued, and thus it has an excuse for conducting operations to weaken it.

After the EUR/CHF saga, the SNB lost tons of money. Billions of francs were lost and, up to this day, it is not known if the imposing of the exchange rate floor was worth it. But the bank is no shy in intervening in the markets and that is all that traders need to know about the SNB.

Other Events to Consider from the SNB

While the monetary policy assessment is the most relevant for the Swiss franc traders, the SNB is also responsible for the releasing of other information with a market-moving potential. Here is a list to consider:

The Eurozone shares a common border with Switzerland and so the flows of goods and services between the two economic areas are important for the main exchange rate – the EUR/CHF. After the SNB dropped the exchange rate floor on the EUR/CHF cross, the correlations in the currency market changed a bit, but not as much as many predicted.

It is well-known that the USD/CHF and the EUR/USD pairs have an inverse correlation. During the time when the EUR/CHF 1.20 floor was still in place, the correlation tightened close to 100%. In other words, any tick up in the EUR/USD triggered a tick down in the USD/CHF.

While the correlation eased after the floor was dropped, it still remains one of the most interesting in the FX dashboard. As the chart below shows, selling EUR/USD and USD/CHF at the same time makes no sense unless one intends to hedge the trading account based on the tight correlation. 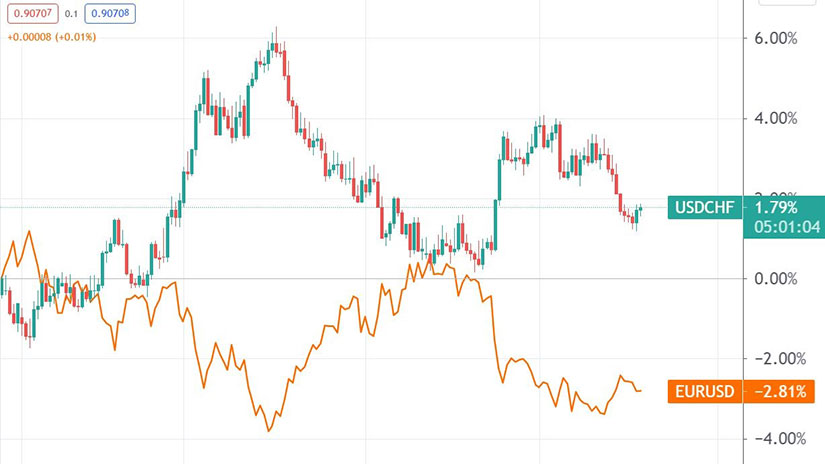 When the two currencies part of an exchange rate are equal, it is said that they reached parity. The parity level on the USD/CHF is closely watched by currency traders because it acted as a pivotal level for more than a decade now.

First acting as support, it now acts as resistance, as the market was rejected at every attempt to move above. Even after the EUR/CHF saga, the USD/CHF managed to climb back to the parity level, only for sellers to emerge again. 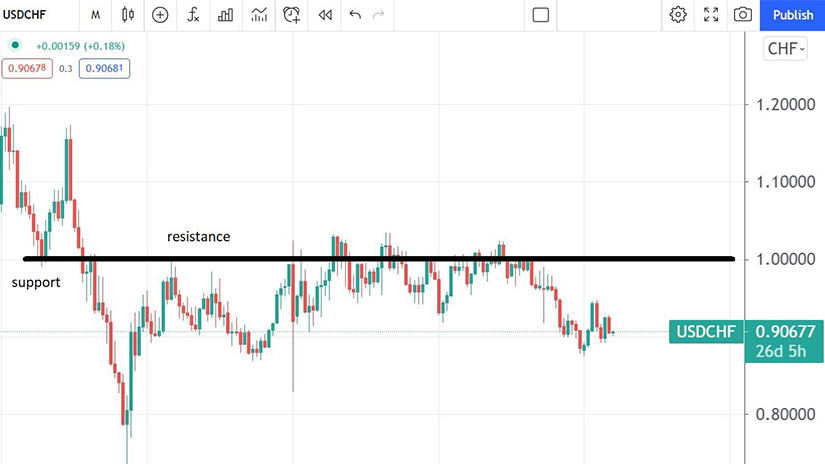 The USD/CHF is the most important exchange rate that the SNB monitors closely. Besides that, the EUR/CHF cross continues to be a headache for the central bank, especially considering that it has a hard time bouncing from lows.

How About the EUR/CHF?

After the SNB dropped the EUR/CHF 1.20 floor, the price dived well below parity. Depending on the brokerage house, the lowest point that the market reached differs.

The shock was so powerful that the Swiss franc moved higher across the board. It triggered a risk-off move that affected all markets, not only the currency one.

In the years that followed, the EUR/CHF, supported by the SNB’s efforts, climbed back to 1.20 only to meet stiff resistance. The volatility on the EUR/CHF pair is typically way lower than the volatility on other currency pairs, and the bias is that it remains heavy and every spike is seen as an opportunity to sell it short. 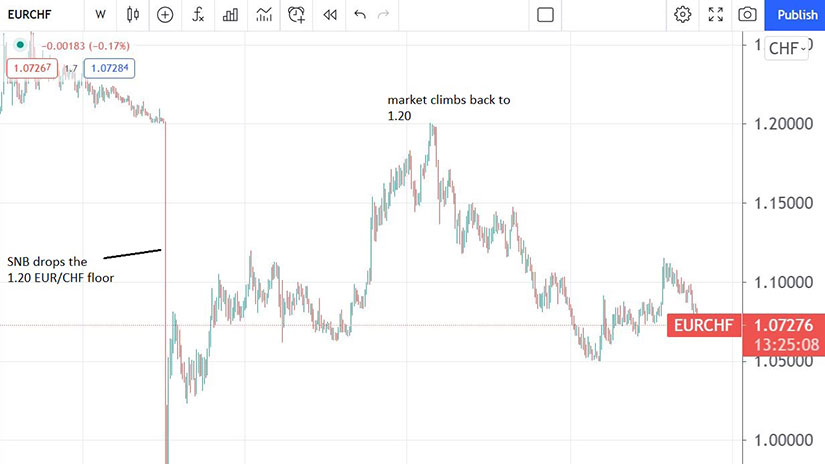 To sum up, the SNB monitors closely the strength of the Swiss franc and considers the currency way overvalued. As such, it made no secret that it intervenes in the market very often and so traders should be aware of the possibility that the SNB may be on the other side of a trade.

The SNB is an avid investor in international markets. By purchasing equities in other markets it uses the investments as a tool to counter the Swiss franc’s strength. It must sell francs and buy local currencies to fund its operations, thus fighting against franc’s appreciation.