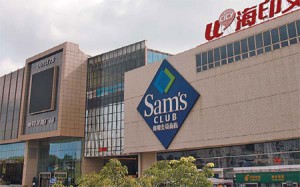 Walmart’s international expansion of its Sam’s Club chain, which in China targets increasingly rich customers in the country’s largest cities, is a key part of the US retailer’s strategy to offset stagnant sales in its home market.

This is part of Walmart’s efforts to accelerate its business in China, where it has had a poor return on investment in recent years and made a series of missteps in order to grow. The expansion of Sam’s Club is also part of a trend that is transforming Chinese consumption habits such as the rapid growth of China’s auto market.

“About 90% of the people who shop in our Sam’s Clubs drive to the club versus our Supercenters, where that number can be as low as 10%,” says Greg Foran, head of Walmart’s China business, on a tour of one of Beijing’s two Sam’s Clubs. “They’re coming to this particular location maybe once a month and they’re buying enough items to last them that month . . . The frequency of shopping is less but the value of [each customer’s] basket is a hell of a lot more.”

Only 10 of Walmarts China stores are Sam’s Clubs, although the worlds biggest retailer is now opening two in the country every year and three of its biggest-selling Sam’s Clubs are located in the country. Unlike Walmart’s more traditional Supercenters, Sam’s Club outlets make money from annual memberships rather than sales, which simply offset each club’s operating costs.

Higher city-center rents drove Sam’s Clubs, and other outlets to more suburban locations that were also easier to drive to, they began to attract richer car owners. The Sam’s Club in southern Beijing is located off the city’s fifth ring road.

Shoppers at Sam’s Clubs pay an annual membership fee of less than $30, a cost of entry that has not changed in the 17 years since the first outlet opened in the southern city of Shenzhen. There are now 1.7 million members across the country, translating into an annual income of $42 million. That is just a fraction of the $1.9 billion in operating income Walmart reported for its Sam’s Club stores globally in 2012, including more than 600 outlets in the US.

In China, a typical Sam’s Club displays products not usually carried by local stores, such as the imported Massachusetts cranberries, 10 pairs of “Made in the USA” athletic socks for $20, or Indian bath towels on sale for $16 each.

Such imported items account for about 30% of Sam’s Club annual sales in China – which the company does not reveal – versus just 5% in a Walmart Supercenter. Mr Foran expects the value of imported goods sold at his 10 Sam’s Clubs in the country to increase fivefold over the next year alone.

Walmart operates about 400 stores in China. It recently announced plans to close 15 to 30 stores – including some with inappropriate locations and layouts that it regrets – and to open 110 new ones as it takes a fresh run at expansion.