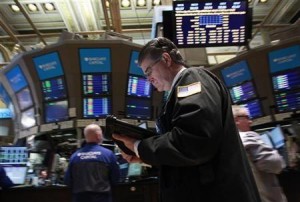 US stocks retreated for a fourth day, the longest slump in 10 weeks for the Standard & Poor’s 500 Index, as investors weighed recent economic data for the Federal Reserve to start paring stimulus efforts this month.

“Investors have gotten used to the idea that at some point the Fed will need to start getting out of the way,” said to Wall Street Journal, Colleen Supran, principal with Bingham, Osborn & Scarborough, which manages $2.7 billion. “But that is not going to be a straight and smooth road. Were certainly going to have volatility in stock prices.”

Data on Wednesday showed companies raised payrolls in November by the most in a year. Labor Department data on Friday may show the unemployment rate fell to 7.2%, matching the lowest level since 2008.

A separate report signaled service industries in the U.S. expanded at a slower pace than forecast in November, showing unconvincing gains in the biggest part of the economy. Purchases of new U.S. homes surged in October by the most in three decades.

The Fed has announced it will start paring bond-purchases if the economy improves in line with its forecasts. Policy makers, who next meet Dec. 17-18, will probably wait until their March 18-19 session before reducing stimulus to $70 billion from $85 billion.

“Everyone’s worried about the taper,” Ben Schwartz, the Chicago-based chief market strategist at broker Lightspeed Financial Inc., said in a phone interview to Blooomberg. “It’s a really delicate situation with the amount the market has run up this year. People are kind of questioning their positions and there’s still a lot of uncertainty with the economy.”

In corporate news, Sears slid 8.3% to $50.92, the lowest in almost three months. Lampert’s ESL Investments Inc. owns 48% of the Hoffman Estates, Illinois-based department store chain, down from 55% reported as recently as October, according to a filing yesterday with the US Securities and Exchange Commission.

J.C. Penney declined 4.4%, to $9.66, despite a report from the retailer showing same-store sales for November rose 10% above year-earlier levels.