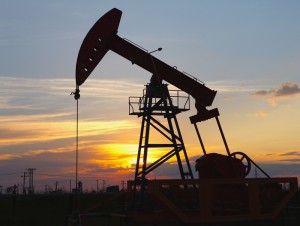 Both West Texas Intermediate and Brent benchmarks rebounded on Thursday after a preliminary report gauging the expansion of Chinas manufacturing sector topped analysts expectations, indicating the Asian economy is stabilizing as the government attempts to shift growth to consumer-driven. A fifth consecutive rise in U.S. crude oil inventories and record high stockpiles in China however limited gains.

Oil prices regained positions after a preliminary private gauge of Chinas manufacturing expansion exceeded analysts expectations, supporting demand prospects in the worlds second-biggest consumer. The HSBC Flash China Manufacturing Purchasing Managers’ Index surged to a seven-month high of 50.9 in October, up from Septembers final estimate of 50.2. The expansion was largely based on strong new orders. The report also showed that Chinas Manufacturing Output Index rose to a six-month high of 51.0 from 50.2 in September. This comes after data by the National Bureau of Statistics showed earlier in the month that the Asian economy expanded at a faster pace in the third quarter from the previous one.

Hongbin Qu, Chief Economist, China & Co-Head of Asian Economic Research at HSBC, commented: “October’s HSBC Flash China Manufacturing PMI rose to a seven-month high of 50.9 on the back of broad-based modest improvements. This implies that China’s growth recovery is becoming consolidated into 4Q following the bottoming out in 3Q. This momentum is likely to continue in the coming months, creating favorable conditions for speeding up structural reforms.”

A weaker dollar also underpinned the market. The U.S. dollar index, which measures the greenbacks performance against a basket of six major peers, traded at 79.18 at 6:47 GMT, down 0.20% on the day. The December contract plunged to a session low of 79.14, the weakest level since September 2012, while days high stood at 79.35. The U.S. currency gauge added less than 0.1% on Wednesday and extended its weekly decline to over 0.6% on Thursday. A weakening of the greenback makes dollar-priced commodities cheaper for foreign currency holders and boosts their appeal as an alternative investment.

However, investors remained wary on speculations for monetary tightening after Chinas money-market interest rates rose to the highest in three months on Wednesday. The Peoples Bank of China refrained from injecting cash for a second day on concern that ample credit could fuel inflation after the National Bureau of Statistics reported that home prices in four major cities rose to the highest since January 2011, while consumer inflation gained at the fastest pace since February.

Vyanne Lai, an economist at National Australia Bank, said for CNBC: “Brent will likely respond in a stronger way to the PMI data as we have seen signs of stabilisation in Chinas growth … but we expect China to maintain a cautious monetary policy in the coming months. So unless theres some impetus from geopolitical risk in the Middle East, we dont see Brent rising too strongly in the coming months.”

Oils gains were capped after a report yesterday showed that U.S. crude inventories rose for a fifth straight week. The Energy Information Administration said that U.S. crude reserves surged by 5.2 million barrels, exceeding the median estimate of analysts surveyed by Bloomberg for a 3 million increase. Total supplies now stood at 379.8 million barrels and were above the upper range for this time of the year. Refineries utilization fell to 85.9% from 86.2%, defying projections for an increase to 86.5%. U.S. crude oil imports fell by 348 000 barrels per day from a week earlier and averaged 7.7 million bpd.

The U.S. is the worlds largest oil consumer, followed by China. The two countries will account for 21% and 11% of global consumption this year respectively, the International Energy Agency predicted.