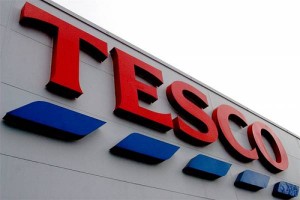 Tescos rival Sainsburys reported a 2% rise in like-for-like sales during the second quarter of its financial year.

Tesco said it had seen a challenging retail environment in Europe, where profits fell 67% to 55 million pounds. It also saw margins being squeezed, in what is already a notoriously competitive retail environment. Group profit margins fell from 5.4% to 4.9% over the period. The companys shares fell 2.5% in early trading. The firms chief executive, Philip Clarke, said Tesco was making progress and was strengthening its UK business, but he saw little improvement in consumers spending power.

“There is less pessimism around, but customers are still not seeing real disposable incomes improve,” he told the BBCs Today Programme. “They are, perhaps, feeling a little better about the future,” he added.

The company said it remains committed to achieving its guidance of mid-single digit trading profit growth in the medium-term and retain its absolute focus on driving improving returns, generating positive free cash flow and ensuring a disciplined allocation of capital.

Sainsburys chief executive Justin King noted his firm was the only major supermarket increasing its market share. “Our groceries online business grew by over 15% in the quarter and is now worth over 1 billion pound in annual sales.” he said.

“Our convenience business grew 20% year-on-year as customers topped up more frequently during the warm summer weather.”

Sainsburys said sales of its own-brand products had continued to rise at even more than twice the rate of branded goods, with its premium Taste the Difference range growing particularly strongly.

Separately, Tesco PLC and China Resources Enterprise Limited announced that they have entered into definitive agreements to combine their Chinese retail operations to form the leading multi-format retailer in China. Tescos results came as the firm announced a joint venture with China Resource Enterprises.

Tesco will have a 20% stake in the business, which it said would have sales approaching 10 billion pounds.

There is no definitive consensus between polled analysts for the current movement of Tescos shares. The firm shares has been enjoying a raise of almost 50% year-to-date.