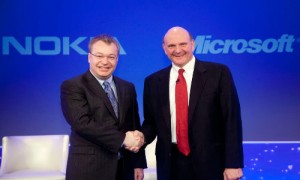 Microsoft Corp. will buy Nokia Oyj’s handset business for 5.44 billion euros ($7.2 billion) as the Finnish company exits a business it once dominated and the maker of Windows moves into hardware to boost growth.

Nokia chief Elop, a former Microsoft executive, will return as Microsofts board weighs options for a successor to current CEO Steve Ballmer, who will depart sometime in the next 12 months after initiating a reorganization intended to transform the software company into a devices and services group much similar to Apple Inc.

The US company will pay 3.79 billion euros for “substantially all” of Nokia’s phone unit and 1.65 billion euros to license its patents, in a big bet from Steve Ballmer, Microsoft’s outgoing chief executive, that the Finnish group’s mobile devices can rival those of Apple and Samsung Electronics.

“Both Nokia and Microsoft really missed the boat in terms of smartphones, and it is extremely difficult to claw your way back from that,” said for Bloomberg, Paul Budde, a Sydney-based telecommunications consultant. “The question is whether combining two weak companies will get you a strong new competitor. It’s doubtful.”

Canadian Elop, hired from Microsoft in 2010, has been cited among the possible candidates to take over from Ballmer, criticized for missing the mobile revolution. Elop cut more than 20,000 jobs and suspended the company’s dividend in January in an attempt to improve its finances.

The companies said Microsoft is expected to use its stockpile of overseas cash to pay for the Nokia purchase and licensing pact. Microsoft and Nokia said the transaction is expected to close in the first three months of 2014, subject to approval by Nokia shareholders and other conditions. Microsofts U.S. market share in smartphones is about 3%, according to comScore.

The deal means Nokia becomes a telecoms equipment company, the latest dramatic change in its 148-year history. It also ends a 30-year presence in phone manufacturing that saw the group become the world’s biggest producer of mobiles but also come close to financial ruin several times because of them.

Microsoft Corp declined 0.45% on the last day of trade which was Friday. Company has gained 25% year-to-date.