This strategy traces back its origins to a person named William O’Neal, who especially made it for the wall street posy back in 1988. His book was called “How to Make Money in Stocks” and it featured a detailed presentation, talking about the cup and handle chart pattern. The prime event we will be looking for, following the cup and handle pattern is a sort of a “new protruding price action action”, if we can call it that. Because of this, we are only going to cite the Call option, just for the purpose of this particular exercise.

There are two basic fundamentals that no cup and handle pattern can go without.

1. The name of this patter should suggest, that the first thing we will be looking for is a cup. A cup most often represents something that is round (in this case it is going to be the pattern itself). We will observe three spaces on the chart, representing price support of all the various level (a line placed horizontally; it can also feature a curvature of sorts). There are also a couple of resistance levels that can be connected to represent the horizontal lid of the cup, beginning from the same space on the left, from where the cup first started to appear.

2.The handle can also be observed in the region right next to the cup; represented by a slight retracement, where nearly parallel lines follow the ups and downs of where the prices spike. If you require a visual example of what a cup and handle patterns looks like, you can turn to the end of this presentation and get just that.

After the end of the handle there is expected to be an enclosure of the price action, putting an end to the protruding trends with a wild breakdown in asset price (as seen in the chart).

Trading with The Cup and Handle

Successfully implementing this strategy onto an actual binary option, should follow a stick and precise guidelines. First of all, one needs to carefully observe, recognize and write down a cup and handle pattern when one is present. Second, one needs to buy a Call option in correspondence to the information gathered. 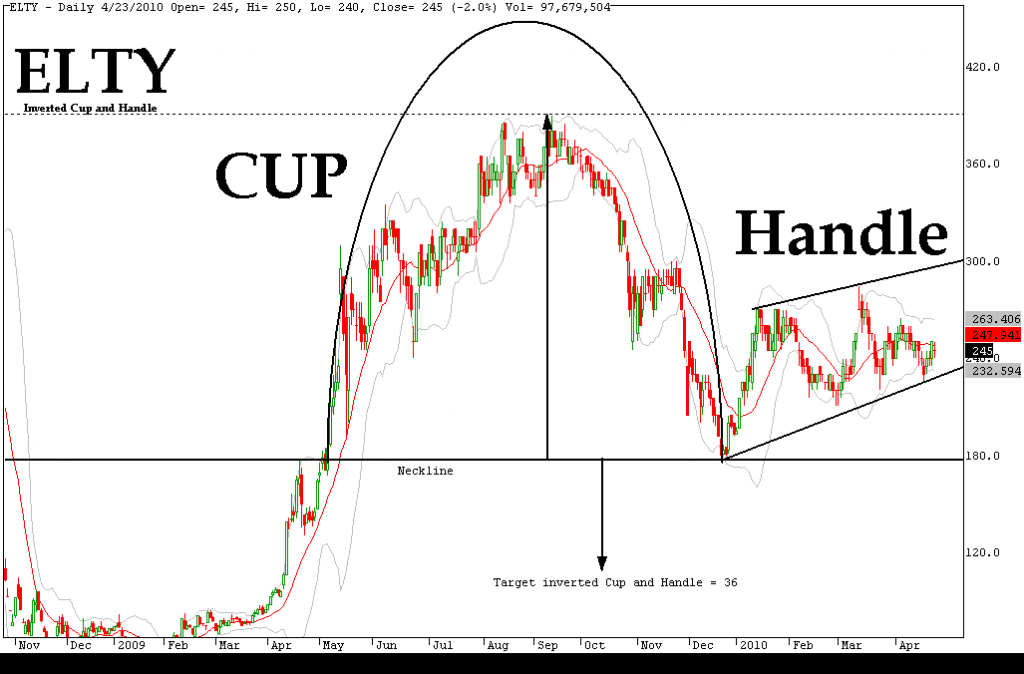 But following a cup and handle pattern manually is not as easy as it sounds, on the contrary. Sometimes patterns are not that easy to spot; especially if one does not have general experience underlying such events. A common starting point would be an area of resistance that was created by sudden spikes (candles).

From there on, one is expected to see a horizontal line joining 2 or more points of resistance, as well as a curved line that fall down and round under them. The golden medium when looking at such a curve, would be if it formed a round cup (not some elliptical mess) without going too deep either. Once we have our cup and our lid, we only need to trace the handle. Moving our focus of vision from the cup, to the next price parameter, we should see one line combining with the candle highs, and another one combining with the candle lows. It is ideal of these two lines somewhat form a flag, although other shapes are acceptable as well.

Understanding this strategy in its entirety, demands that one knows when is the right time to strike a deal. The event is triggered by a positive price breakout (going upwards); which would precedded by the careful mapping the cup and handle pattern. The supposed breakout is expected to happen after the end of the handle (flag, or even pennant in shape), with a spike going through the above handle line , while closing above it.

Considering the nature of the cup and handle pattern, and all its bullish implications, it is important to know that this strategy (when used to trade with binary options) should only be used when keeping the Call option in mind. When this breakout in prices finally occurs (know that it is pretty easy to get confused when doing binary trading for the first time), one should place a Call option right where the handle ends and a spike is starting to form. As seen below, we can expect this to happen just as the upper line of the handle has stopped descending and it is just about to spike.

The above chart is a clear example of what a typical cup and handle pattern should look like (as well as the exact moment a Call option should be played by the trader). Every aspect of this design; from the flat lid, curved cup to the flag-like handle at the end, fits the development of the price action perfectly. The handle can resemble any rectangular shape; like a flag if both the upper and lower lines are more or less parallel to each other. Other instances may include a pennant-like shape, which could of course be observed when the two lines that make up the pennant become narrower at the end.

The perfect time to purchase a Call option for that particular price action, is the second time there is an upward spike, right after the narrowing of the handle had come to an end. In this situation, it is perfectly possible to trade using either the Touch or No-Touch options respectively. For a No-Touch option, the best time to buy is at the bottom region of the cup. A Touch on the other hand, is best bought when the price is little above the handle. If a trader decides to use the Touch or No-Touch in this situation, in combination with the Call option, is entirely up to the individual making the trade.