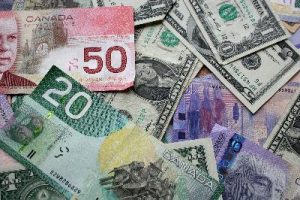 Canada’s dollar continue to distance from recent 4-month highs against its US counterpart on Tuesday, as crude oil futures fell for a second straight trading day. March 15th marked the 31st drop in oil prices out of the past 63 trading days. Oil futures for April delivery went down as low as $35.96 per barrel on March 15th, or the lowest price level since March 4th, and closed at $36.91, falling 0.73% on the day. As of 7:41 GMT today the commodity was edging down 0.57% on a daily basis to trade at $36.70 per barrel, after going down as low as $36.62 earlier.

On Wednesday USD/CAD trading may be influenced by the following macroeconomic reports and events as listed below.

The number of housing starts in the United States probably increased 4.6% to 1.150 million units in February, according to market expectations, from the seasonally adjusted annual rate of 1.099 million during the prior month. The latter has been the lowest number of starts since October 2015, when a revised up level of 1.062 million was reported (1.060 million previously). In January starts of single-family houses dropped at a monthly rate of 3.9% to 731 000, while starts of buildings with five units or more were 2.5% lower to reach 354 000. In January, housing starts fell in the Midwest (down 12.8% month-over-month), in the Northeast (down 3.7%), in the South (down 2.9%) and in the West (down 0.4%).

The number of building permits in the country probably edged down 0.1% to 1.200 million in February from an annual level of 1.202 million in January. Single-family authorizations decreased at a monthly rate of 1.6% to reach 720 000 units in January, while permits of units in buildings with five units or more were reported to have increased 1.1% to 442 000.

Building permits are permits, issued in order to allow excavation. An increase in the number of building permits and housing starts usually occurs a few months after mortgage rates in the country have been reduced. Authorizations are not required in all regions of the United States. Building permits, as an indicator, also provide clues in regard to demand in the US housing market. In case a higher-than-anticipated figure is reported, this would have a moderate bullish effect on the US dollar. The official report is due out at 12:30 GMT.

The annualized consumer inflation in the United States probably decelerated to 0.9% in February, according to market expectations, from 1.4% in January. The latter has been the highest annual rate of consumer inflation since October 2014, supported by higher cost of rents, medical care and transportation. In monthly terms, the Consumer Price Index (CPI) probably fell 0.2% in February, following a flat performance in the preceding month.

In January upward pressure came from cost of services less energy (up 3.0% year-on-year and following a 2.9% surge in December). Within the category, cost of shelter went up 3.2% year-on-year, cost of medical care rose 3.3% and cost of transportation services increased 2.7%. Additionally, consumers paid more for food in January (up at an annualized rate of 0.8%, or matching the rate of increase in December), according to the report by the Bureau of Labor Statistics. The largest downward pressure on the annual CPI came from prices of energy (down 6.5% in January from a year ago, or a lesser decline compared to December).

The annualized core consumer inflation, which is stripped of prices of food and energy, probably remained at 2.2% for a second consecutive month in February, according to expectations. It has been the highest core inflation since June 2012. It is usually reported as a seasonally adjusted figure, because consumer patterns are widely fluctuating in dependence on the time of the year. The Core CPI is the gauge, which the Federal Reserve Bank takes into account in order to adjust its monetary policy stance. The Fed uses the core CPI, because prices of food, oil and gas are highly volatile, while the central bank’s tools are slow-acting. In case, for example, prices of oil plunge considerably (as is the present situation), this could result in a low rate of inflation, but the central bank will not take action until this decrease affects prices of other CPI categories.

If the general CPI tends to approach the inflation objective, set by the Federal Reserve and considered as providing price stability, or a level below but close to 2%, this will usually bolster the appeal of the US dollar, as it heightens the probability of monetary policy tightening.

Industrial output in the United States probably shrank at a monthly rate of 0.3% in February, according to market expectations, following a 0.9% expansion in January. The latter has been the first increase in six months and also the sharpest one since November 2014, when output grew 1.3% month-over-month. Januarys production was probably held down by a small amount, as a result of a storm, which developed later in the month.

In January activity in the US mining sector remained unchanged from a month ago, following four consecutive months of decline.

The gauge for utilities registered a 5.4% monthly increase in January, as demand for heating increased, after remaining subdued in December due to unusually warm weather.

Manufacturing production, which accounts for almost three quarters of total industrial production, rose 0.5% in January. Production of non-durable and durable goods increased by 0.5% each, while the gauge for other manufacturing industries (publishing and logging) registered a small gain.

A larger-than-projected monthly decline in the index would usually have a moderate bearish effect on the US dollar. The Board of Governors of the Federal Reserve is to release the production data at 13:15 GMT.

The Federal Open Market Committee (FOMC) will probably keep the target for the federal funds rate at 0.500% at its two-day policy meeting, scheduled to be concluded today, according to the median forecast by experts.

In December 2015 the Committee raised borrowing costs by 25 basis points to the current 0.500% level for the first time in 55 policy meetings.

In January the target range was left intact. Policy makers reiterated they anticipate only a gradual increase in borrowing costs, while they are watching closely the effects of global economic and financial developments on US outlook.

According to extracts from the FOMC Policy Statement released in January: ”The Committee currently expects that, with gradual adjustments in the stance of monetary policy, economic activity will expand at a moderate pace and labor market indicators will continue to strengthen. Inflation is expected to remain low in the near term, in part because of the further declines in energy prices, but to rise to 2 percent over the medium term as the transitory effects of declines in energy and import prices dissipate and the labor market strengthens further. The Committee is closely monitoring global economic and financial developments and is assessing their implications for the labor market and inflation, and for the balance of risks to the outlook.”

The Minutes from the FOMCs meeting on January 26th-27th revealed that policy makers considered a rate hike at their most recent meeting, but, however, spending and production data had disappointed, while commodity and financial market developments might prove to be a constraint to US macroeconomic activity. ”Regarding the foreign economic outlook, it was noted that the slowdown in Chinas industrial sector and the decline in global commodity prices could restrain economic activity in the EMEs and other commodity-producing countries for some time. Participants discussed recent developments in China, including the possibility that structural changes and financial imbalances in the Chinese economy might lead to a sharper deceleration in economic growth in that country than was generally anticipated”, the Minutes stated.

”While the exposure of the United States to the Chinese economy through direct trade ties was limited, a number of participants were concerned about the potential drag on the U.S. economy from the broader effects of a greater-than-expected slowdown in China and other EMEs.”

”Almost all participants cited a number of recent events as indicative of tighter financial conditions in the United States; these events included declines in equity prices, a widening in credit spreads, a further rise in the exchange value of the dollar, and an increase in financial market volatility.”

”Members expressed a range of views regarding the implications of recent economic and financial developments for the degree of uncertainty about the medium-term outlook, with many members judging that uncertainty had increased. Members generally agreed that the implications of the available information were not sufficiently clear to allow members to assess the balance of risks to the economic outlook in the Committees postmeeting statement. However, members observed that if the recent tightening of global financial conditions was sustained, it could be a factor amplifying downside risks.”

The FOMC will announce its official decision on policy at 18:00 GMT. A rate hike would surely bolster demand for the US dollar. The rate decision will be followed by a press conference with the Fed Chair at 18:30 GMT. It will be closely examined by market participants and analysts for clues over the future path of interest rates.

Manufacturing sales in Canada probably increased for a third month in a row in January, going up at a monthly rate of 0.5%, according to market expectations. In December compared to November shipments were 1.2% higher, which has been the steepest monthly increase since July 2015. The Monthly Survey of Manufacturing features statistical data regarding sales of finished goods, inventories, unfilled orders and new orders in Canadas sector of manufacturing. About 10 500 items and 27 000 companies are encompassed.

Manufacturing sales are considered as an indicator of demand in the future. An increase in the number of goods and unsold inventories suggests, that demand is insufficient and vice versa. At the same time, a surge in sales (shipments) suggests a stronger demand. Therefore, in case shipments rose at a faster pace than anticipated, this might have a limited-to-moderate bullish effect on the Canadian dollar. Statistics Canada will release the official data at 12:30 GMT.