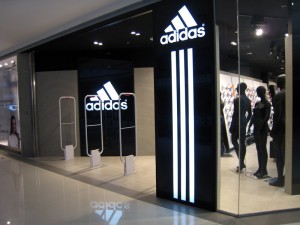 German sportswear company Adidas AG reported on Thursday a slight increase in second-quarter profit on the back of strong sales, which however were dragged by its deteriorating golf business.

Adidas, the worlds second-biggest sportswear maker, said that net income from continuing operations rose by 2% from a year earlier to €146 million in the second quarter on the back of a 5% jump in currency-neutral sales to €3.907 billion. This compared to analysts projections for profit of €147 million on revenue of €3.8 billion.

The strong results were driven by the continuously well performing adidas and Reebok brands, where currency-neutral sales rose by 8% and 6% from a year earlier, respectively, and as strong consumer sentiment led to double-digit growth in Western Europe, Greater China and the MEAA region.

The German company faced investor pressure last year after it issued a string of profit warnings and scrapped its 2014 and 2015 financial targets but concerns eased in March when Adidas reported strong first-quarter results and announced a new strategic plan for financial revival.

“We have said all along that our new strategy Creating the New’ will already show first positive results this year. The second quarter is proof positive for that,” said Herbert Hainer, adidas Group CEO. “I am pleased to see how well adidas and Reebok are resonating with their respective consumers.”

Dragging on second-quarter results, however, was a continued deterioration at the TaylorMade-adidas Golf unit, which saw revenue decline 26% on a currency-neutral basis, with sales contracting in most categories and in particular metalwoods and irons. The groups gross margin dropped 0.9% to 48.3%, mainly due to lower product margins at the golf business, while the operating margin slid 0.4% to 6.0%.

Adidas said it has initiated a major turnaround plan for its golf business, aimed at enhancing pricing, promotion and trade patterns, as well as optimizing the supply chain and product costs. In addition, it has hired a so far unnamed investment bank to analyze “future options for the company’s golf business, in particular the Adams and Ashworth brands.”

Adidas acquired the TaylorMade brand in 1997 along with Salomon, developing it into the worlds biggest golf supplier, and bought its smaller brands Ashworth in 2008 and Adams in 2012 for $72.8 million and $70 million, respectively.

However, with the sport losing popularity, especially in the US which accounts for about half of the global golf market, suppliers have been forced to scale back their operations. Nike warned last year that the golf market was challenging, while US retailers such as Dicks Sporting Goods have pared their once highly profitable golf businesses.

Still, the German sportswear company confirmed its guidance for the the full year, projecting sales to increase at a mid-single-digit rate on a currency-neutral
basis, boosted by strong momentum at both adidas and Reebok, in particular in Western Europe, Greater China and MEAA.