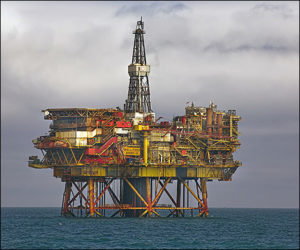 West Texas Intermediate and Brent crude fell sharply on Friday, posting hefty weekly drops, as the US dollar continued its march towards parity with the euro, while a warning by the IEA that the global supply overhang is growing offset a fresh drop in US oil rig count.

Oil prices extended losses as the US dollar raced ahead, hitting fresh highs against the euro and weighing down on dollar-denominated commodities. The US dollar index for settlement in March jumped 0.9% on Friday to 100.314, having earlier risen to 100.380, the highest in 12 years. A stronger greenback makes commodities priced in it more expensive for foreign investors and curbs their appeal as an alternative investment.

Some support was provided by an industry report showing a further reduction in the number of active US rigs targeting oil, but those numbers failed to convince bulls to step in as US crude production reached last week the highest in more than three decades, while the International Energy Agency warned of an even bigger supply glut.

Baker Hughes Inc. said on Friday that US oil explorers idled 56 rigs, cutting their number for a 14th straight week to 866, the lowest since March 25th, 2011. Producers have brought offline 709 rigs since early-December as a slump in oil prices that began in June forced spending cuts and layoffs by the thousands.

And although the steep reduction in active rigs will eventually affect US production by curbing growth rates, bigger and higher-yielding shale wells that continue to pump helped US output to reach a new high last week. Goldman Sachs said on March 8th that the country was still running enough rigs to boost production by 290 000 barrels per day by the fourth quarter, compared to a year earlier.

The Energy Information Administration said in a monthly report that it expects US output to be 9.35 million barrels this year, up from its previous forecast of 9.3 million bpd.

The government agency said in its weekly supply report on Wednesday that US crude supplies jumped by 4.512 million barrels in the seven days through March 6th to 448.9 million, the most in at least 80 years, while production inched up to 9.366 million, the highest on weekly statistics stretching back to January 1983.

“U.S. supply so far shows precious little sign of slowing down,” the International Energy Agency said on Friday. “Quite to the contrary, it continues to defy expectations.” It added that the global supply glut was continuing to build and the US may soon run out of storage space for crude.

Bullish interest was also missing even as news broke out the US government has proposed to purchase up to five million barrels of oil for its Strategic Petroleum Reserve. Meanwhile, investors worried about the possibility of a partial nuclear deal between Iran and world powers by the end of the month and a final accord in June. An agreement would lift sanctions on the Islamic Republic, allowing it to boost crude exports which have been limited to near 1 million barrels per day.

OPEC continued to pump above its 30-million-bpd target, with no outlook for a special policy meeting ahead of the scheduled one in June. The oil cartel will maintain its current pace of production at its next meeting unless producers outside the group scale back output first, said this week Qatars ex-energy minister Abdullah bin Hamad al-Attiyah.