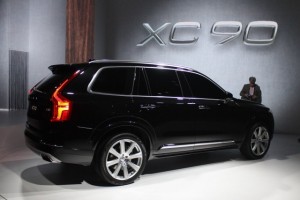 Volvo reported a healthy increase in operating profit on Thursday as sales in China and Europe more than offset lower volumes in the U.S.

The Swedish vehicle manufacturer reported operating profit of 2.2 billion kronor in 2014, up 17.4% compared to last years results SEK of 1.92 billion. Over the period the company delivered 10% more vehicles to a record of 465 866 cars as China become its largest market.

Although Volvo posted strong volumes over the past year, the company is still far away from its target of 800 000 units sold per year, which it aims to reach by 2020, while also improving profitability.

During the past year the company introduced the luxury crossover XC90 SUV, marking its first new vehicle since its was bought by Chinas Geely in 2010 and applying pressure on luxury market rivals BMW, Volkswagens Audi and Daimlers Mercedes-Benz in the worlds largest car market.

The new vehicle is the result of a five-year, $11 billion investment program aimed at creating a manufacturing line capable of assembling a number of various models.

Despite slowing growth in China, the company bets on its new scalable product architecture at its plant in Daqing to drive future growth, which will be the most advanced manufacturing facility in the country, Volvo said.

China sales expanded 33% over the year as Volvo teamed up with 30 new dealers to bring to total number to 187.

The car maker has been struggling at its operation in the U.S., where sales dropped 7% during the reported period. Volvos position in the states has been weakening over the last ten years as the companys lack of output facility in the country makes it highly vulnerable to the dollar.

However, the company said it has launched a revival plan in with a mid-term goal of reaching 100 000 sales a year in the U.S. via imports of the new XC90 and future vehicles.

“The benefits of our strategy are already being felt. We have reported record sales in 2014, but there are other important markers that underpin our confidence in the future,” said Chief Executive Håkan Samuelsson.

According to the Financial Times, the 25 analysts offering 12-month price targets for Volvo have a median target of SEK 98.00, with a high estimate of SEK 115.00 and a low estimate of SEK 70.00. The median estimate represents a 0.86 % decrease from the last closing price.