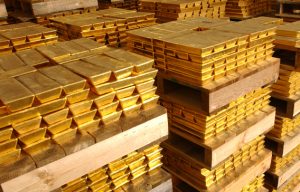 Gold futures closed the week below the key support at $1 200 for the first time in more than nine months, as upbeat data from the US and a downturn for the euro boosted the dollar, which pressured non-interest bearing precious metals.

“The key driver has been the more likely tightening of U.S. monetary policy, which has been reflected in the stronger dollar,” Robin Bhar, an analyst at Societe Generale SA in London, said for Bloomberg. “Gold doesn’t earn any yield or return. Investors are becoming more disillusioned when it comes to gold.”

Holdings at the SPDR Gold Trust, the largest exchange-traded gold-backed fund, dropped a further 1.2 tons to 767.47 on Friday, the lowest since December 2008, as investor interest in the yellow metal drops in light of US and EU economic data.

The key figure on US nonfarm payrolls for September was released this week, revealing the US economy had added 248 000 new jobs, compared to expectations of a 215 000 reading, boosting the US dollar to a new four-year peak. Meanwhile, the unemployment rate was logged at a six-year trough at 5.9%, also beating expectations.

The Fed has often cited labor market weaknesses as the main reasons for keeping accommodation in place for a longer period. Should the figures today beat expectations, it would strengthen speculation that the Fed will be more prone to hawkish moves, which would boost the dollar further and pressure all dollar-denominated commodities, such as gold.

Earlier, the Conference Board’s US consumer confidence index, a key gauge on US consumer sentiment, unexpectedly logged for a sizable downgrade to 86.0. Consumer sentiment is a vital indicator to consumer spending, which in turn accounts for about 80% of US GDP. Meanwhile, ISM posted a below-par, though still massive, growth for US factories, while its services PMI was logged above expectations, and also for a significant monthly expansion.

Elsewhere, investors had focus on the European Central Bank (ECB) meeting, for details as to the bank’s ambitious €3tn stimulus program. ECB President Mario Draghi revealed that the program will last at least two years and will start with covered bonds in second half of October.

The ECB announced the measure last month, which would add to a central lending rate cut to a historic 0.05% low in efforts to revive growth in the Eurozone. The latest batch of economic data also proved bearish, with manufacturing in the Bloc dropping to a 14-month low.

Earlier, key unemployment and CPI figures from the Eurozone were posted. The unemployment rate was logged unchanged at 11.5%, while consumer inflation, as expected, dropped to 0.3% on an annual basis. Core CPI, however, was lower than forecast at 0.7%. The news sent the euro hurdling down, logging a new two-year low, pushing the dollar up.

Upbeat data from the US and weak figures from the Eurozone both boost the US dollar, which in turn weighs on dollar-denominated commodities, such as gold. The greenback reached a four-year high against a complex of other major currencies yesterday, extending the upward trend and pressuring commodities across.

“The divergence in monetary policies between the Fed and other central banks will further push up the dollar and weigh on gold,” Zhu Runyu, an analyst at CITICS Futures Co., said for Bloomberg. “As geopolitical tensions fade, gold has also lost a key price support this year.”

The street protests in Hong Kong spooked some traders early this week, hitting Asian equities, which dropped some 2%, supporting gold and other havens. Investors also eyed possible physical demand curbs, as street clashes fend off much of any jewelry demand in one of the top centers in the biggest gold market in the world.

The Hong Kong factor was, however, was just a brief respite for the precious metal, and the strength of the US dollar remained the driving downward force, outweighing any positive sentiment.

Meanwhile, the US-led coalition made further air strikes against ISIS this week, destroying insurgent’s facilities in Syria, as well as checkpoints in Iraq. The coalition was joined by France, the UK, Australia, Canada and Turkey, bulking up the Wests response to the jihadists.

The Islamic State (ISIS, IS, ISIL) claimed vast swathes of territory in Iraq and Syria over the past few months, banking on sectarian confrontation between Muslims, as well as anti-US and anti-Semitic rhetoric. The extremists spooked markets in June, after beating a numerically superior Iraqi army to gain control of the northern regions of the country.

The insurgents have failed, however, to threaten the major southern oilfields in Iraq, and successful counterattacks by Kurdish fighters, in addition to wide Western backlash, have calmed markets and erased most of any safe haven demand.