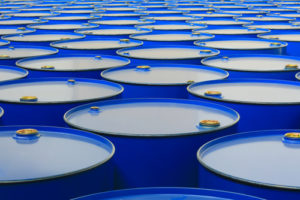 WTI and Brent futures continued losing during early trade in Europe today, as investors eye upcoming US oil inventories reports. Crude is now more than 17% lower than three months ago, and is pushing multi-year lows.

Crude prices are again under pressure by worries over supply-demand disbalances. Yesterday China, which accounts for 11% of total oil demand, posted the latest in a string of downbeat economic data, with industrial production for August logging the slowest annual growth in almost six years. Below-par data on retail sales, investments and CPI had also weighed on Chinese outlooks, though also spurring speculation that authorities will intervene more heavily to stimulate faltering growth.

Europe, which consumes about 14% of all oil, has also clocked in its fair share of bearish sentiment with a plethora of negative data. Unlike China, however, the European authority has already intervened with a central lending rate cut to 0.05%, the lowest ever, and the launch of a €3tn QE program. Investors now eye upcoming economic sentiment gauges out of the German Zentrum für Europäische Wirtschaftsforschung (ZEW). Both the marks for Germany and the Eurozone are set to log lower despite the massive effort by the ECB.

The downturns in Europe and China serve to only complement the significant expansion of oil production recently. Libya is recovering output and exports despite the ongoing civil war, and the same goes for Iraq, while the US are experiencing a shale oil boom.

OPEC, the worlds leading oil supplier, lowered the projected oil it will market next year, while the IEA also decreased its oil demand growth outlook for this year and for 2015.

“We’re in a situation where the demand, supply scenario is fairly weak,” Ric Spooner, a chief strategist at CMC Markets in Sydney, said for Bloomberg.

Big draws in US oil stocks would be supportive for prices, as they would indicate lively demand in the the worlds top oil-consuming economy, where 21% of all oil goes.

According to Binary Tribune’s daily analysis for Monday, West Texas Intermediate October futures’ central pivot point is at $92.19. In case the contract breaches the first resistance level at $93.76, it will probably continue up to test $94.59. Should the second key resistance be broken, the US benchmark will most likely attempt to advance to $96.16.

Meanwhile, November Brent’s central pivot point is projected at $97.77. The contract will see its first resistance level at $98.51. If breached, it will probably rise and test $99.15. In case the second key resistance is broken, the European crude benchmark will probably attempt to advance to $99.89.

If Brent manages to penetrate the first key support at $97.13, it will likely continue down to test $96.39. With the second support broken, downside movement may extend to $95.75 per barrel.