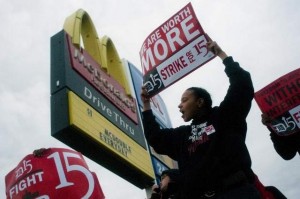 The largest restaurant chain in the world – McDonalds Corp. – is facing lawsuits by its employees in three states in the U.S. – Michigan, California and New York. The company and its franchises are being accused of systematic wage theft, and the suits were filed yesterday by the lawyers of the companys workers.

McDonalds is now facing a long-running campaign over its labour practices while it has been dealing with slower growth during the last few years. The suits are filed in three U.S. states and there are 27 plaintiffs named, who say to represent tens of thousands of employees of the fast-food company. The pressure on McDonalds Corp. also comes at a time when there is a debate held in Washington over an eventual raise of the federal minimum wage from 7.25 dollars an hour to 10.10 dollars an hour.

One of the attorneys, who filed the suits in California and New York – Mr. Joseph Sellers said on a conference call, which was cited by Bloomberg: “These suits have been filed to stop this widespread wage theft.” As reported by the Financial times, Mr. Sellers also said: “Despite reaping tremendous revenues and profits thanks to the labours of crew members who earn at or just above minimum wage, McDonalds is unlawfully failing to pay its workers for all the hours they work.”

McDonalds Corp. was accused in violation of the U.S. and state labour laws for underpaying the companys employees by forcing them to work “off the clock”, deleting hours from their timecards and also not paying them overtime wages.

The company explained that it was reviewing the accusations. A spokeswoman of McDonalds – Heidi Barker Sa Shekhem said in an official e-mailed statement cited by Bloomberg: “We are currently reviewing the allegation. McDonalds and our independent franchisees are committed to undertaking a comprehensive investigation of the allegations and will take any necessary actions as they apply to our respective organizations.”