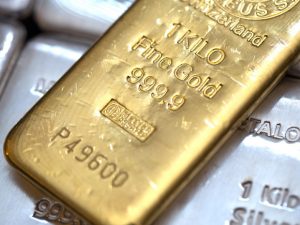 Gold and silver prices soared during midday trade in Europe today, as tensions over the crisis in Ukraine outweighed a strengthening dollar. Meanwhile, copper futures were lower, as traders priced in the rising dollar and concerning China data.

“With the Russians once again massing troops on the Ukraine border and the world watching to see if Israel/Hamas keep to the cease-fire, I doubt many people will want to short gold here,” David Govett, head of precious metals at Marex Spectron Group in London, said in a note today. “A stronger dollar curbs the appeal of precious metals.”

The build up in forces on the Russian side comes as Kiev is pushing with its offensive against the pro-Russian separatists. The two remaining strongholds of the rebels in Donetsk and Luhansk are already seeing combat, after more than half their residents have evacuated.

“Poland’s concerned now that tensions are increasing on the Russia-Ukraine border…and gold is grinding higher,” Bill Baruch, senior market strategist with iiTrader in Chicago, said for the Wall Street Journal.

The economic outlook for the US saw a sizable boost to the positive yesterday, as ISMs services PMI reading reached a nine-year peak, signalling a massive expansion for the services sector, which generates 80% of US GDP. Coupled with a better-than-expected reading on factory orders, ISMs report boosted the US Dollar Index to a one-yeah high.

Positive reports for the US economy support the dollar, lifting its price against other currencies. Since gold mostly is traded in dollars, a pricier dollar means the precious metal is more expensive to other currencies, lowering its overall investment appeal.

The dollar continued gaining today, after the Eurozone posted disappointing data, with Italy back into recession and disappointing factory orders in Germany. Previously, Markit logged slowing expansion of services in the Bloc, while its retail PMI stood well below the “50” mark, which signaled a contraction for the retail business. The European Central Bank will decide on benchmark interest rate tomorrow, though no surprises are expected, and the rate will probably be unchanged at 0.15%.

As outlooks for the EU economy worsen, the euro drops in value, and the euro has a very strong opposite correlation with the US dollar, meaning a weakness for the euro translates into strengthening for the dollar, which pressures the dollar-denominated gold.

“All metals today are under strong pressure due principally to two factors: weaker Asian markets, particularly Chinese, and a strong U.S. dollar,” Eugen Weinberg, head of commodities research at Commerzbank, said for Reuters.

Copper, like gold, is mostly dollar-denominated and a stronger dollar lifts the price of the metal for foreign currencies, lowering its overall appeal.

Previously, HSBC posted its reading on services expansion in China, the worlds leading consumer of industrial metals, accounting for 40% of total demand. HSBCs services PMI was logged at 50.0, a nine-year low, standing on the verge of contraction.