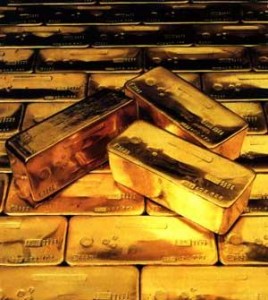 Gold advanced on Tuesday, after a report showed shipments to China from Hong Kong more than doubled. However, a stronger dollar pressured the yellow metal, while assets in the SPDR Gold Trust, the biggest bullion-backed ETF, remained at a 5-year low, adding to bearish sentiment.

On the Comex division of the New York Mercantile Exchange, gold futures for settlement in February rose by 0.08% to trade at $1 239.00 per troy ounce by 07:57 GMT. Yesterday prices touched a session high at $1 247.70 an ounce, the strongest level since December 16th. Prices swung between days high and low of $1 244.60 and 1236.40 per troy ounce, respectively. Gold futures settled last 5-day period 1.95% higher, the largest advance in ten weeks. However, the precious metal settled last year 28% lower, the steepest annual decline since 1981.

Fed decided on December 18th to cut its monthly bond purchases by $10 billion to $75 billion, this month. Gold was pressured after a recent series of unexpectedly upbeat economic data from the US supported Fed’s tapering decision and sent equities rallying. The data raised speculations that the Fed might extend the reduction of its monetary stimulus program in the near future.

Yesterday, positive US data put some pressure on the yellow metal. The US Census Bureau released a report that showed the nation’s factory orders increased by 1.8% in November, from October’s 0.9% decline, while analysts predicted the index to climb to 1.7%.

However, a report by the Institute for Supply Management (ISM) revealed the activity in the US sector of services unexpectedly decreased in December. The corresponding Services PMI declined to a reading of 53.0 last month from 53.9 in November, short of analysts’ projections of an increase to 54.5.

On January 2nd, a report by the US Department of Labor revealed the number of people, who filed for unemployment benefits for the week ended December 28th, declined to 339 000 from upwardly revised 341 000 the previous week. Analysts projected that the jobless claims will increase to 342 000.

Meanwhile, the Institute for Supply Management reported that manufacturing activity in the US expanded at the second fastest pace for the year in December, albeit retreating slightly from November, as new orders grew by the most in nearly four years. The ISM manufacturing PMI posted at 57.0, beating analysts’ projections for a drop to 56.9 after jumping to 57.3 in November. The strong reading was based on a solid expansion in new orders.

A stronger dollar also weighed. The U.S. dollar index, which measures the greenback’s performance against a basket of six major peers, added 0.13% to trade at 80.91 by 07:56 GMT. Prices shifted in a daily range between days high and low, 80.95 and 80.83. The US dollar index settled last week 0.7% higher. Strengthening of the dollar makes commodities priced in it more expensive for foreign currency holders and limits their appeal as an alternative investment.

Assets in the SPDR Gold Trust, the biggest bullion-backed ETP, remained at 794.62 tons, the lowest since January 2009, data on the website showed. The fund has lost 41% of its holdings in 2013. A total of 552.6 tons has been withdrawn in 2013. Billionaire hedge-fund manager John Paulson who holds the biggest stake in the SPDR Gold Trust told clients on November 20 that he wouldn’t invest more money in his gold fund because it isn’t clear when inflation will accelerate.

In the first eleven months of 2013, according to data from the Hong Kong Census and Statistics Department, gold shipments to China from Hong Kong doubled to 1 017 metric tons.

“The Chinese will certainly be looking at taking advantage of these lower prices,” said Gavin Wendt, founder and senior resource analyst at Sydney-based Mine Life Pty, cited by Bloomberg.

According to the World Gold Council, China probably overtook India as the largest consumer in 2013.